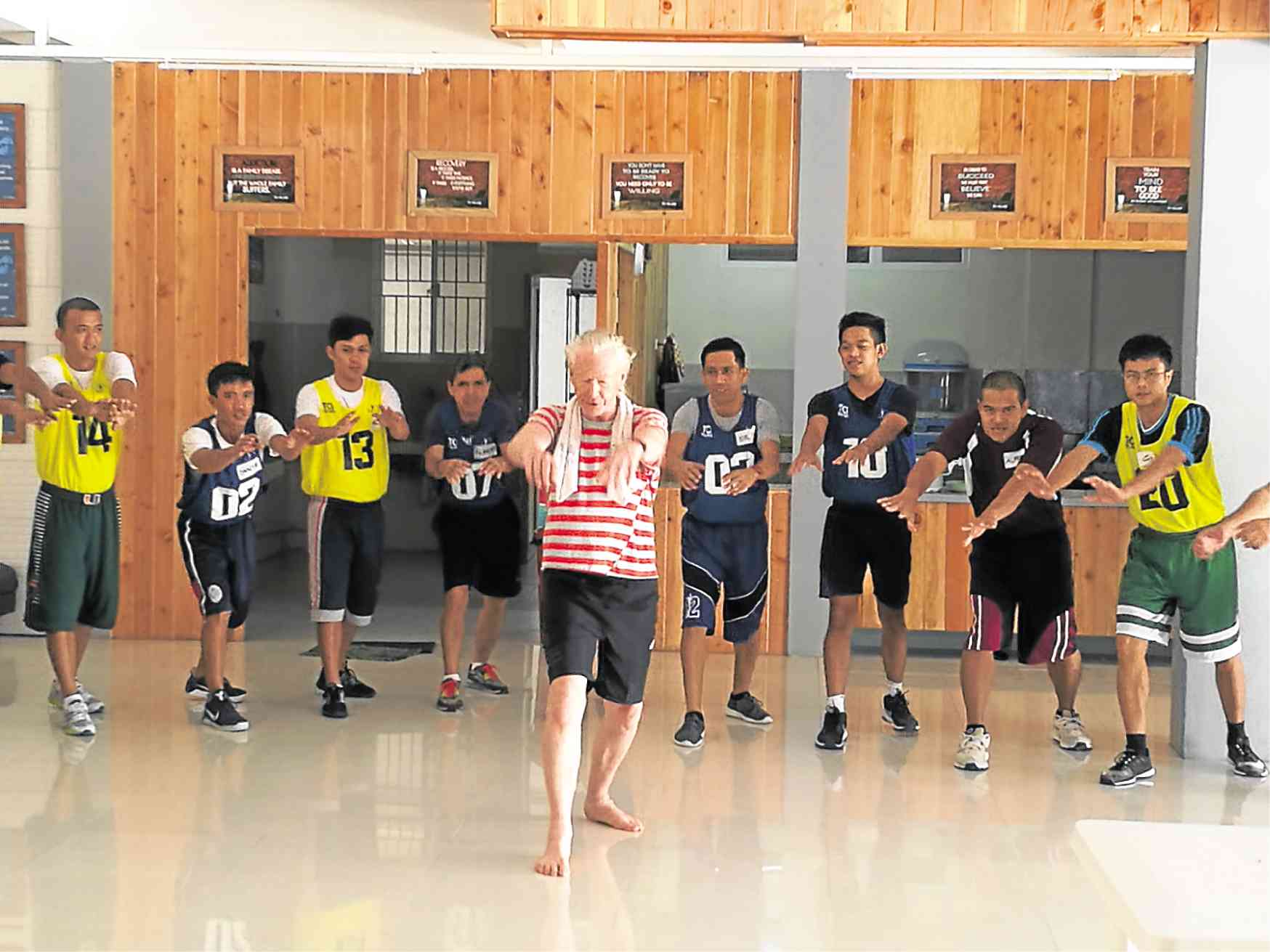 The scene is like a martial arts class—an elderly but wiry Caucasian leading a group of young Filipinos through a routine that emphasizes breathing and movement.

The Caucasian is Peter Bruce Robertson from Scotland, and the kids are patients or stay-in residents of TCI Village, a rehab facility in Cavite which describes itself as “a healing place for persons with addictions.”

Robertson is on a four-day visit to conduct talks and workshops in TCI.

It’s only his second time to visit the country. “Forty years ago I went to Panay Island on a surfing holiday,” he recalls. This time he’s out to help TCI residents, most of whom are recovering from drug addiction.

“Drug addiction is a health and education issue,” Robertson tells Lifestyle. “It’s not a criminal issue. It’s a behavioral issue. We don’t have bad people, we have bad behavior. Address the behavior.”

Robertson lived for 25 years in Japan where he studied martial arts and started a family before emigrating to Australia.

In Australia, he works as a case manager at After Care, a nongovernment organization which looks after people recovering from mental illness like schizophrenia and depression. His specialty is drug-induced psychosis.

He also helps a 150-bed residential community model rehab center, where he put together a self-care program which gives people tools to use when they complete their rehab and go back to society.

The self-care program he espouses, Robertson says, is a means “to connect emotional behavior to the body and the mind, because the fundamental reasons for addiction come down to stress. The world is becoming a more stressful place. If we can equip people to deal with stress in a healthy way, then we nip the problem in the bud. And it’s really about creating a sense and understanding of what health is, physical, mental, emotional and spiritual health. Because we are a holistic being.”

He adds that in Australia, there’s a program called the Walk for Recovery, in which “people meet once a year to march through the city of their home, to make governments aware that there is a large population of people in recovery and there is a vote to be had, for politicians to improve rehab facilities.”

He says he’s impressed by the organizational structure of TCI. “The facility itself is very nice. I understand it’s a brand-new facility. It operates very much like what a program in Australia does. I see the staff is organized. The actual program, I think, will be successful.”

The 12-step program, adapted from the international fellowship group Alcoholics Anonymous, is “mainly about spirituality, believing that a higher power will help you recover,” TCI co-founder Jun Tan says. (He’s the “T” in TCI; “C” is Joel Chavez, “I” is Joey Ibañez.)

Ibañez says that the second principle, BC, is about “changing your behavior and lifestyle. You have to be emotionally strong when you finish the program.”

Robertson believes that most people suffering from drug addiction can be rehabilitated, although he points out that “functionality is different. Whether people can be functional in their rehabilitation, that depends on different factors.”

One of the factors is acquired brain damage. “If a person, through addiction, experiences brain damage, then there are limitations that are put on the recovery process,” he says.

Robertson reveals that there’s a large percentage of people afflicted with brain damage from alcohol. “We always think of heroin being the most evil drug, but if we look at tobacco and alcohol, these two cause more problems than any other drug. They’re highly addictive, and they’re legal.”

Since education is an important factor in keeping away from drug addiction, Robertson stresses that it should start in schools: “If children are given an honest, realistic education, then it has a follow-on effect. Education is key.”

Robertson—whose work takes him to Saigon, Bangkok, Phnom Penh, Yangon, and Tokyo—says that he enhances his programs with a martial arts format, “because I know that I can grab people’s attention and interest through it, and then I seed it with the educational tool, and make the connection between martial arts and health consciousness, diet and nutrition, movement, relaxation.”

He adds that when people get on a relaxation phase, “which is really about how you develop breathing patterns, you then deal with stress.”

Addiction to technology is also a problem, says Robertson. “Young people are stuck with their mobile phones. I think there aren’t many thin, athletic people in the Philippines. I see waistlines are expanding. I think there’s an addiction to sugar, to fats, to fast-food.”