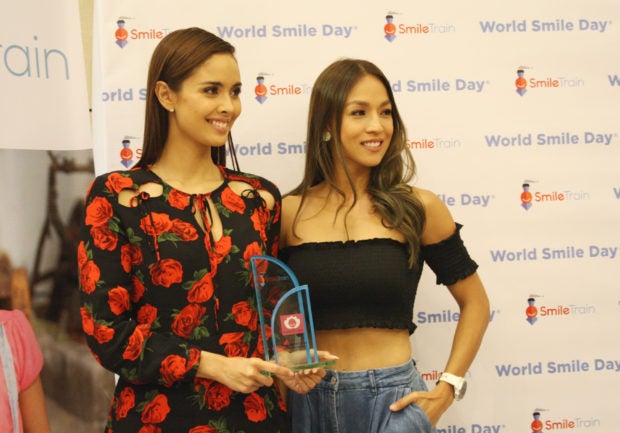 For six years, Angel has been a nurse in a hospital that provides free cleft lip and cleft palate surgery in the country.

What makes her work more meaningful is that she herself has been a beneficiary of the service.

“Malaki ang impact sa buhay ng mga bata (It makes a great impact on the lives of children),” she shares, speaking to partners at an event of non-profit Smile Train.

“Yung ibang magulang iiyak pa sa iyo kasi ang laki ng naitulong sa kanila (Some parents cry because of the great help that they’re given),” says Angel, who like many children born with a cleft lip, suffered from bullying while growing up.

Smile Train celebrated World Smile Day with a countdown to 50,000 successful surgeries. The international organization has funded over 45,000 since it opened its Philippine chapter in 2001.

Beauty queen Megan Young and actress-fitness trainer Aubrey Miles are among the celebrity ambassadors who raise awareness and funds for the cause.

Through yoga studio Beyond, both promoted the Yoga for Smiles challenge, where special classes allowed yoga practitioners to make donations for surgeries.

After being tapped as an ambassador, Young became more immersed in the cause. “It actually pushed borders for me… I was so interested that I asked [a representative] to take me to one of the hospitals that Smile Train works with, just so I could really get a grasp of what all the nurses, all the doctors do,” she shares, and has since made several hospital visits to patients.

Fitness buff Miles is also committed to more fundraising activities aside from yoga. She announced during the event that she would be running at the organization’s Berlin Marathon. One entry to the race is worth $2,500 (approximately P128,000), enough to provide surgeries to ten patients.

“It’s nice to work out and at the same time help,” says Miles. “I’m just happy to be in a room of people who have changed so many people’s lives.”

Other celebrities who have contributed include Marian Rivera, Congress’ ambassador for Women and Children with Disabilities, and actress Bianca King, a yogi herself who promotes Yoga for Smiles.

While cleft lip can be treated at almost any age — patients include those in their 60s — for those with cleft palate, the risks are higher when the older the patient is.

“We want to see them earlier because then it reduces the trauma, the psychological impact on them,” she says, adding that patients who are treated before they can speak avoid “ngongo” or a speech defect.

Empowering children who ‘hide from society’

According to Smile Train, cleft lip and/or palate is the top birth defect in most developing countries, with 120,000 patients still in need of surgery in the Philippines.

Cleft lip and cleft palate are birth defects that occur when the tissue that forms the lip or the roof of the mouth does not join together during pregnancy.

Effects of having a cleft lip or cleft palate include difficulty in feeding and speaking, but the largest effect remains to be emotional, with children suffering from bullying and low self-esteem because of their appearance.

She  shares that the biggest change of a beneficiary named Jozef post-surgery was that he no longer received stares.

Free smiles in every community

Since 2001, the charity’s goal has been to ensure the poor are able to get surgery and treatment completely free of charge.

It partners with medical societies and organizations to ensure that hospitals are permanently accessible to patients in need.

On average, 16 surgeries are performed each day. Depending on the city and the hospital, surgery can cost between P50,000 to P150,000, says Flaviano.

For any procedure, Smile Train provides a fixed amount of P12,000 while the partner hospital shoulders the rest of the costs, which can also include speech therapy and orthodontic treatment over months or years.

Flaviano emphasizes that having permanent partners in communities is important so that locals can keep going back and forth to the same hospital and doctors at no cost, considering that even transportation expenses become a hindrance to seeking treatment.

With regard to donations, “any amount is welcome,” the director says, citing that young donors have been able to raise proceeds from a block movie screening or even a lemonade stand. JB

Smile Train hooks up with Ironman tilt to raise funds