Christmas and volunteerism go together 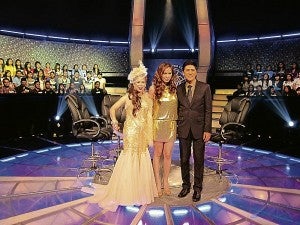 The joy of giving warms the heart, especially during the holiday season. It’s a great year-round feeling, but there’s something about Christmas that makes spreading good cheer much more meaningful than usual.

Our Assumption HS Batch ’81 organizes outreach programs to chosen streetchildren every Christmas. This year, we have reunited with the kids of Vides Philippines, a nonprofit organization that promotes and defends the rights of children, women and their families.

Thanks to our generous friends, especially Kenneth and Cindy Yang from McDonald’s, we hosted 30 kids and volunteers to a happy lunch and fun afternoon of games and prizes at McDonald’s UN Avenue branch. Ever-stylish Cindy and another good friend, Patty Chilip, were there to welcome the kids led by Sr. Josefina Carrasco, FMA, and the rest of the Vides Volunteers.

After they enjoyed their McDo Happy Meals, two of the McDonald’s mascots arrived. Ronald McDonald is sporting a new, more stylized version of the painted-face mascot that is quite adorable. Not to be outshone, Grimace did his dance grind number to the delight of all the kids. 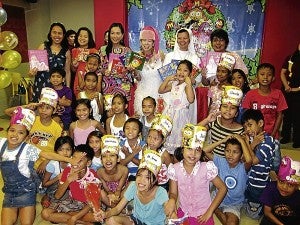 About two years ago, Sr. Jo and the Vides Volunteers were also part of our Batch ’81 Christmas program. That time, she had foreign volunteers who were in their early 20s. It is so inspiring to see the younger generation embrace charity at an early age.

Indeed, it is great to see the youth take time from their holiday merriment to keep involved with volunteerism. Kenneth and Cindy’s son Kevin is a generous young fellow. He is the vice president of the Habitat Youth Council, working alongside equally devoted Isabel Martel Francisco, the council president. 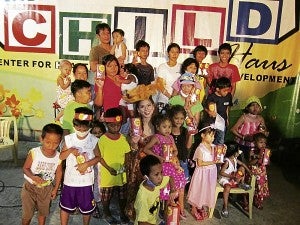 The other young names on the roster include Pedro Tambunting Roxas and Simon Romulo Tantoco, scions of parents who have taught their children the value of giving back. The Habitat Youth Council made a big splash at the recent Tatler Ball, as they presented their youth programs for Habitat for Humanities to all the guests.

The energetic team recently launched the Habitat Watch by Swatch at Greenbelt 5. A part of every Habitat Watch by Swatch will help build a house during Youth Build 2012. On May 12, 2012, Habitat for Humanity Philippines will gather 2,000 volunteers to build 200 homes in Brgy. Tanza, Navotas. Simultaneous builds will be ongoing in four other countries—China, India, Indonesia and Thailand.

At the launch, Swatch ambassador Derek Ramsey was looking very dashing, even though his arm had been broken in a sports accident. No matter, Derek always looks cool with the latest Swatch on his wrist. 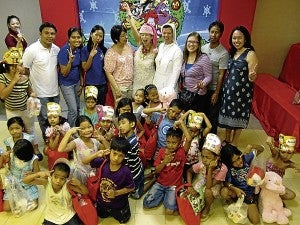 With so many fine examples of holiday gift-giving around us, we must be tempted to ask: “What’s the right age for kids to start learning how to give back?”

It’s a simple thought, but one made to make sure the less fortunate don’t start out one step behind. Anton’s parents, Bobet and Ruthy Vera, helped Anton put it all together by partnering EBM with Aklat, Gabay, Aruga Tungo sa Pag-Angat at Pag-Asa (AGAPP), a pet project of presidential sister Pinky Aquino-Abellada.

The two foundations are partnered in Kaagapay sa Silid, which builds preschool classrooms and libraries in the poorest public schools in the country. The first two are already operating in Aniban Central School in Bacoor, Cavite. 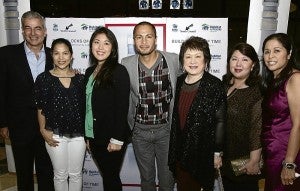 EBM has big plans for 2012, aiming to build one classroom a month and expand into teacher training and child development programs. The foundation was officially launched at the Marriott Hotel just last week, with a ceremonial turnover to school principal Gloria Mojica.

Generous donors—Calata Corporation, Unilab Foundation, CATS Motors, Furnitalia, RCBC, Lee Jeans, Citisec Online and Smart Communications—jointly gave a check for over P2.5 million to AGAPP. Kaye Tinga, my co-chair for the Red Charity Gala, asked Tim Yap and I to help conduct the auction of beautiful art pieces, watches and jewelry during the launch. I was glad to help out, as the auction raised another million for the charity.

Christmas is indeed the best time for sharing and caring. Please watch “Who Wants to Be A Millionaire” on TV5 at 7:30 p.m. Sunday. Divine Lee and I got chosen to try our luck to raise two million pesos for Child Haus.

Child Haus is a halfway house for children with cancer. The center provides medical assistance and housing for the mostly provincial kids. They currently have over a hundred kids, either living in the home or coming in as outpatients. Even better, over 40 kids have beaten cancer and “graduated” from Child Haus. For more info, visit Child Haus on Facebook or call 0939-3535598 to make donations.