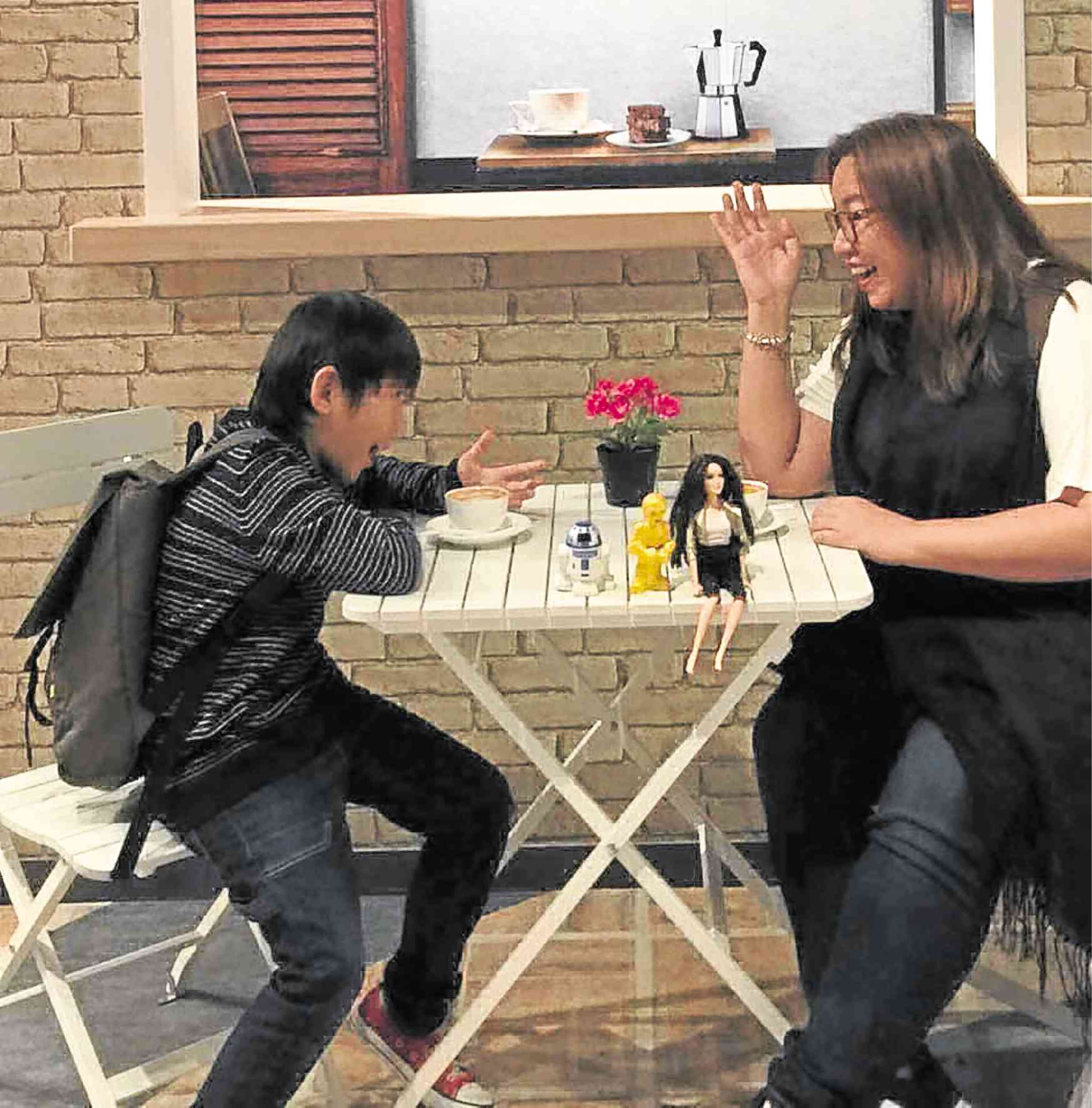 Rona Co saw the negative effects of TV on her 9-year-old son, Maru: “He became impatient and irritable.”

How these kids–with their parents go gadget-free, cold turkey

My 6-year-old son committed a major infraction, so we suspended his iPad privileges for a month. As it is, he is allowed to use it only for two hours each on Saturday and Sunday, so this was meant to really make him more mindful of his actions.

Admittedly I was mostly happy about it. I’ve observed that he becomes irritable and sasses back when he’s on it. I said “mostly” because having him on it means I get some me time, too.

We aren’t totally screen-free, as I oversee his online piano lessons (hoffmanacademy.com) on an almost daily basis and coach him through free coding lessons (code.org). I see the value of being connected, with parental participation.

With coding, for instance, I appreciate how he learns how to debug Angry Birds instead of mindlessly playing it. Coding teaches problem solving, clearer communication and logical thinking.

We try to keep him safe online, too, by having him use only gadgets I’ve set up at home that won’t allow him to venture unguided and unfiltered, by taking out Safari and instead installing the more child-appropriate Mobicip, and replacing YouTube on “his” device with YouTube Kids.

I said “his” because I constantly remind him that he doesn’t really own it. It’s the family device (even if he’s the only one using it).

I’ve also disabled the downloading of apps unsuitable for his age, though I realize that some still fall through the cracks, so vigilance is crucial.

Since he goes to a school that embraces technology, he will be using soon such devices more often. I find it very important to instill self-discipline and self-control now, as I know how addictive and a waste of time playing videogames can be.

I lived in a home that purposefully didn’t have a family computer (when it was all the rage), though I had a Game & Watch.

In elementary and high school, I was allowed one TV show a week (“Remington Steele”! “Airwolf”! “21 Jumpstreet”!). I grew up getting used to boundaries, content to do other things.

Rona Co, 38, and the rest of her family don’t use phones at meal time. She also has a “no phone and minimal TV” rule for her son Maru, 9.

“But it wasn’t always the case,” she admitted. “When Maru was younger, we let him watch a lot of TV, as in a lot. I didn’t know any better then, and being a working mother struggling to find a more constant caretaker for my kid, TV seemed to be the next best thing to finding a yaya.

“But eventually, we saw the effects of too much TV on him. He became impatient and irritable. Yes, TV helped expand his vocabulary tremendously, but when you listened to him, he spoke like a cartoon!”

Maru goes to a Waldorf school, where screen time is highly discouraged. “For the first two years, he had a hard time relating to his classmates, because all he wanted to talk about was his favorite TV show at the moment,” Co said.

The longest that the Cos have been gadget-free was for a whole semester.

“In 2015, the school noticed that Maru was having a hard time focusing on his tasks, so they recommended that we see a doctor,” Co recounted. “The doctor told us that because my son has a highly vivid imagination, he absorbs everything he watches on TV and YouTube, and has a tendency to think about them all the time. So, the doctor recommended we go cold turkey.”

Co continued: “So, for the rest of the school year, it was zero gadgets, not just for Maru but for me and his dad, too—at least when he was awake. We didn’t touch our mobile phones unless there was an important call, nobody watched TV, and we didn’t go to the movies. Instead, every night, I read him a story from Grimm’s Fairy Tales.

“His doctor also recommended that he get physical activity for about 15 minutes before going to school to train his mind to be more mindful and ready for school tasks.

“I think it worked, because for the rest of that school year, his teachers saw a change in his behavior. He became more patient, he was able to finish his tasks in school, he became more sociable. He began enjoying other stuff like biking, playing with our neighbors, things he didn’t like doing before because he was always watching TV.

Co said that eventually, “we allowed him to watch TV again. But only for limited periods. One show lang, ganun. When we see him getting ‘addicted’ again, we divert his energies to other activities such as drawing or clay work.”

Co realized that they need to be firm with their house rules regarding tech use.

“Even now, I still struggle with it,” she said. “Sometimes, my son makes his paawa face and I feel like caving in. Sometimes, I do cave in, especially when I need to bring him to work and want him to stay put.

“But when we’re at home, we are firmer with the rules, because less screen time means more time for activities that can help develop his imagination, more opportunities to get bored (and boredom, they say, benefits our creativity), and more time for interaction with the family.”

The longest that Sheila* grounded her kids from gadgets was for three months.

“I noticed a lot of bad behavior and fighting during one of our trips every time they used it, so I took it away,” she said.

While her kids are back to using devices, they are allowed to use them only on weekends. “After lunch on Sunday we take them back,” Sheila said.

Lala*, 40, also has rules regarding screentime for her two boys aged 10 and 9. “We limit the gadgets that we buy, and the kids don’t have their own.

“On weekdays,” Lala said, “screens are not allowed (for the kids) unless it’s needed to do research for school, while having family meals at home or outside, and on social occasions such as parties, get-togethers —we want them to mingle.”

On weekends, screen time is limited, too: a maximum of two hours per day (for the kids).

“As a family, we’ve never gone 100 percent no gadgets,” Lala said. “Since my husband and I are entrepreneurs, we need to check our e-mails to make sure everything is fine in the office. But when we are on vacation, we hardly use screens.”

She explained: “We believe technology in itself is not bad. However, it can be harmful if not used at the proper time and in the proper way. It can be addicting, especially for kids who haven’t developed self-control yet. At such a young age, they can be easily influenced by what they see and hear.

“We always explain to the kids that we are preparing their hearts and minds, not just for gadget use, but to make the right decisions when they are older. When the time is right, they will have their own gadgets. Hopefully, by then, they will know how to use them the right way. At the end of the day, we focus on building their character first.”

For parents who realize their need to go on a digital detox, Lala advised, “it isn’t too late to make the change in limiting gadget use. You have to agree and do it as a family, which means that, as parents, we have to model the same behavior to our children.

“It’s going to be challenging at first, but the benefits are worth it. You get to spend more time as a family, bond, talk and build on your relationship. Kids learn to have self-control, be more patient and sociable and make use of their time wisely.”–CONTRIBUTED