How Emerson Yao became a marathon runner after 50 | Inquirer Lifestyle 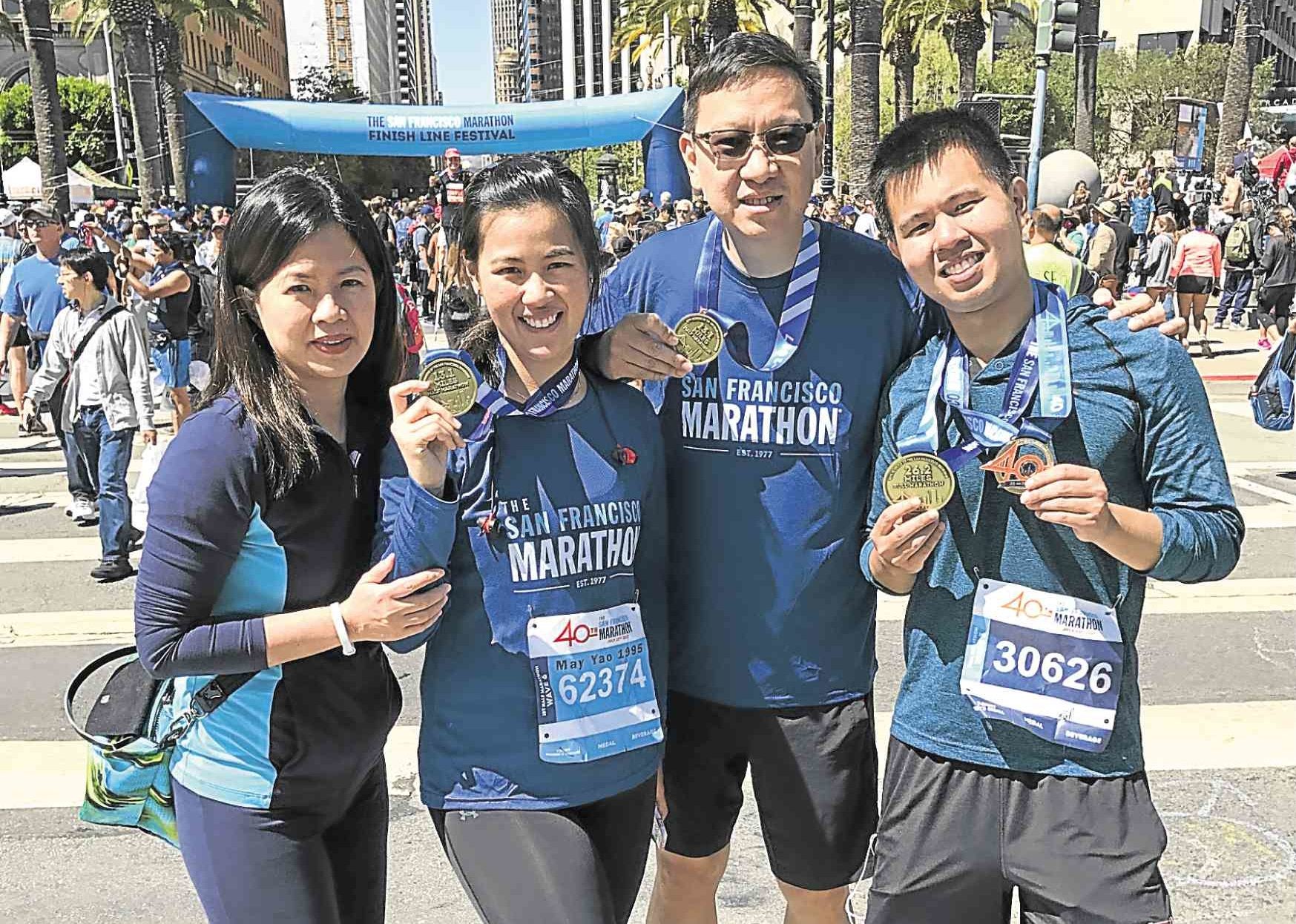 Yao with wife Lingling and kids May Andrea, 22, and Mark Andrew, 23, at the San Francisco Marathon

How Emerson Yao became a marathon runner after 50

Entrepreneur Emerson Yao loves challenges. Turning 52 on Christmas Day, he is girding for his next marathon, while keeping an eye on the bottom line of his businesses.

The managing director of Lucerne Watches operates 40 stores in the luxury range, such as Rolex, Omega and Breguet, and another 40 for such fashion  brands as Fossil and TW Steel.

Then there are Japanese franchises in eyewear such as Owndays, of which there are 23 shops, and Anello fashion-forward backpacks. which has 13 stores.  With partners, he ventured into the food business with two branches of Yayoi, a teishoku or full-course Japanese restaurant.

Yao balances his life with short-distance recreational running. When his children, Mark Andrew and May Andrea, joined the San Francisco Marathon 2016, he was enticed.

Wanting to compete against himself and test his limits, he asked them to join him at the 40th anniversary of the San Francisco Marathon last July.

He recalls that to gird for his first international race, he

ran around the oval tracks of Ultra or Manila Polo Club for speed and joined organized fun runs during the weekends for stamina.

Weight resistance training in the gym complemented the endurance program.

Instead of hiring a coach, he consulted seasoned runners on how to stay longer in a race.  The most common challenges are dehydration and muscle soreness toward  the finishing time.

“Aside from my feet heating up, I felt my feet and shoulders aching. I realized that if I did the wrong things,  I could injure myself,” he says.

To address muscle cramps, he stuffs a small bottle of pickle juice in his pocket and drinks it in the last few kilometers. “I tend to get cramps on the 19th km. So I would drink the pickle juice on the 17th km,” he says. Other runners prefer the salt stick to replace electrolytes and keep them hydrated.

He invested in a good pair of running shoes to understand his gait and to cushion his feet from the shock of the pavement. Light and breathable running socks, which wick moisture, keep his feet cool and enable him to run longer.

“Running socks are different from basketball and badminton ones. Padded socks may work for cold weather, but not for our warm climate,” Yao says.

Paying attention to correct form, Yao learned to keep his shoulders down instead of hiking them up towards his ears. The upright but relaxed upper body maintained an aligned  running posture.

A first-time participant, Yao joined his first long race—a half-marathon—at age 51.  Runners started on the flat surfaces along The Embarcadero and Fisherman’s Wharf and the coastline. The stretch of Golden Gate Bridge was exhilarating, as was the return from the city’s iconic landmark to Golden Gate Park. He finished 21 km in two hours and 27 minutes.

After a few months of training, Yao has since improved his half-marathon record  to two hours and 15 minutes.

Yao further tested himself by joining Run Rio, a full marathon that went from Okada Hotel to Bonifacio Global City and back to Mall of Asia. He finished in five  hours and 37 minutes.

Yao upped his ante with a finishing time  of five hours and 17 minutes at the recent Standard Chartered Singapore Marathon.

“I expected aches and pains at 30 km but they were mild,” he says. Yao plans to beat his record with a goal of sub five, or a finishing time of under five hours, in the next Tokyo Marathon in February 2018.

Despite his pursuit of achieving higher goals,  Yao still finds the half marathon exhilarating.  The New York Times quoted the Journal of Sports Medicine and Physical Fitness in a study comparing half marathon and marathon runners. The former were not as dehydrated as the full marathon runners. They kept a stable pace and managed to increase their running rate in the last few kilometers. Their legs were still fresh after the race.

Meanwhile,  marathon runners began to slow down after 21 km. They complained of  soreness after the 42-km run.

“During the last 10 km, you keep asking the people beside you, ‘When will this end?’” Yao says.

He goes to the gym to  strengthen the lower body and protect the muscles against wear and tear in the long hours of running. The exercises, culled from YouTube, include stair climbing to power up the upper thighs and hips, and core strengthening to run faster and longer.

Asked why Yao never hired a coach for running or a personal trainer at the gym, he explains, “It’s hard to commit with my schedule. I don’t like to worry about somebody waiting for me. I like the freedom of owning my time.” Yao always has his gym bag of workout clothes and shoes so he can train during his spare time.

His greatest pleasure is running with his children. “It’s easier for the younger generation because they’re fit. My motivation was to lose weight. Running has been effective.” The six-foot tall businessman dropped from 200 lbs to 187 lbs,  or 13 pounds in six months.

As a businessman, Yao finds running a meditative experience.

“It clears my mind, especially when I have an important meeting or I have to entertain guests. The sport offers lessons in life, too. I tell myself that life is not a sprint, but a marathon. I have to keep pace, be patient, and the reward will come at the end—even if it takes a long time to reach it.” –CONTRIBUTED