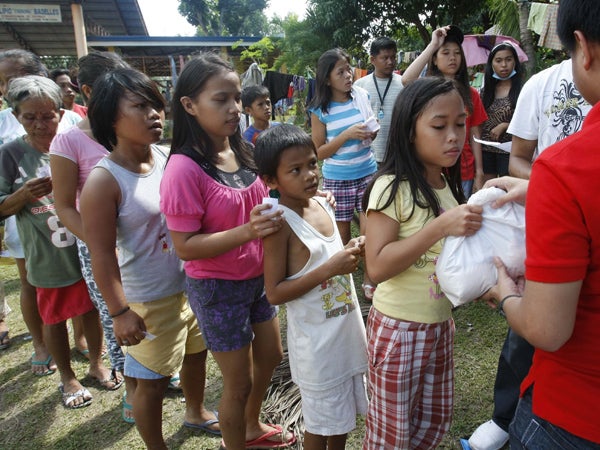 The Mindanao floods and their rising death toll (957 as of this writing) and their terrible damage to property and resources may have dampened the Christmas cheer. But paradoxically, it is compelling people to return to the simplicity of Christmas and elicited another form of downpour—a downpour of charity and giving.

In the true Filipino spirit of bayanihan and in accordance with the season of sharing, many food companies, culinary institutions, restaurants big or small, hotels, supermarkets, private citizens and ordinary employees are pooling their resources to extend aid to the typhoon victims, monetary or otherwise.

Some groups have donated cash while others have taken the initiative to collect food items, such as canned goods, noodles, rice and clothing materials, to be given to relief organizations.

Goldilocks recently opened a commissary in Tablon, CDO, and the workforce has been on a nonstop shifting schedule since Sunday, baking bread and toasted goods, loading them on to trucks to be brought to disaster sites, and helping out with the relief efforts.

Trucks from their Davao commissary are also making the eight-hour drive to supply more goods to the typhoon victims. Goldilocks employees have also organized themselves to lend a hand to different first-aid and medical efforts.

The efforts are being overseen and coordinated by recently appointed Goldilocks president Richard Yee.

Employees of Shangri-La hotels and resorts group have initiated their own internal campaign, “Bayanihan for Sendong,” to raise funds for the devastated region.

Erica Sotto, Makati Shangri-La director of communications, says the initiative was made possible through the cooperation of each of the hotel’s human resource teams. The cash donation will be distributed to various selected charity institutions, such as the Philippine National Red Cross and ABS-CBN Sagip Kapamilya.

The Peninsula Manila, on the other hand, is also sending dry goods like noodles, canned goods and some toiletries (toothpaste, toothbrush, shampoo, soap, etc.).

Mariano Garchitorena, The Pen’s director for public relations, says he got a call last weekend from his friends, Eileen San Juan of the Cagayan de Oro Hotel and Restaurant Association, Len Cabili and Dr. Arnold Unson from Iligan City, asking for help.

“On the part of our employees, we started passing the hat and we plan to deliver the donations either through Red Cross or De La Salle University relief operations,” Garchitorena  says.

Dusit Thani Hotel Manila is also spearheading a donation drive that will run for a week in the hotel before handing them over to Red Cross. Donations include cash, food, clothing and blankets. (Call 2388823)

Discovery Suites is helping out Operation Tulong Bayan of the Department of Social Welfare and Development (DSWD). The hotel is also a drop-off point for donations which will be turned over to the DSWD. (Call 7198888)

Restaurateur Vic-Vic Villavicencio has pledged a good sum of money for Red Cross.

“Red Cross has asked us for financial help instead which is better for logistics,” says Villavicencio.

Frances Yu, Rustan’s Supermarkets vice president for marketing, has given P1 million to the mayor of CDO to aid in relief efforts.

The LJC Group of Restaurants has decided to scrap its Christmas party and instead donate the allocated budget, worth P65,000, to the typhoon victims.

“We’d rather have a simple merienda with fellow employees at Bistro Remedios,” says Malou Evidente Domingo, LJC marketing manager. A good friend of one of Domingo’s officemates died in CDO.

The money will be given to the Kapuso Foundation Inc.

Chef Gaita Fores has embarked in a relief operation partnering with Operation Tulong Bayan and White Space of Monique Villonco. They coordinate drop-off points of goods for Noche Buena of the families that are affected.

“Operation Tulong Bayan started during ‘Ondoy’ that was based in Balay, Araneta Center, with a Makati branch at White Space,” says Fores. “We are helping in the logistics of collecting food packages, such as two kilos of rice, fruit cocktail, packs of noodles, canned goods and Christmas cards written by donors themselves.”

Culinary school Enderun Colleges has a community drive involving all its students. Right now, volunteers from Enderun are divided into two groups. One group is based in Manila, in charge of collecting and organizing donations and asking for more donations through social media.

The second group is based in CDO, where some of the students are from. They are in charge of preparing and cooking the raw food that comes from Manila, and giving the Manila group inputs on what donations or help to ask for. Cooking and dispatch are done in Grand City Hotel in Cagayan de Oro.

Enderun says it is pooling together donations and cooking food for soup kitchens.

“We are in touch with individuals who will take care of distribution, though we are also looking for organizations,” says Mark Tan, Enderun marketing associate. “The Enderun Community Drive is targeting to feed 300-500 people. This community drive is the fourth one we’ve launched. The previous ones were for ‘Ondoy,’ ‘Falcon’ and ‘Pedring.’ All are initiated by students.”

The French Baker, through the Tzu Chi Foundation, has donated P100,000 as part of the fund to bring in 200 metric tons of rice from Taiwan for “Sendong” victims in CDO. Tzu Chi Foundation is the same organization that significantly cleared Marikina of its mud debris during the “Ondoy” floods.

Johnlu Koa is coordinating with members of the PhilBaking industry association, headed by Jun Umali of Gardenia, to send thousands of freshly baked Pinoy pan de sal and Pinoy tasty through Tzu Chi Foundation to be airlifted by Zest Air and PAL for free.

Chatime is also putting up coin banks in all of its 10 stores to receive change donations for the victims.

“We will match the collections from the public’s donation and send the funds also through Tzu Chi Foundation,” says Koa.