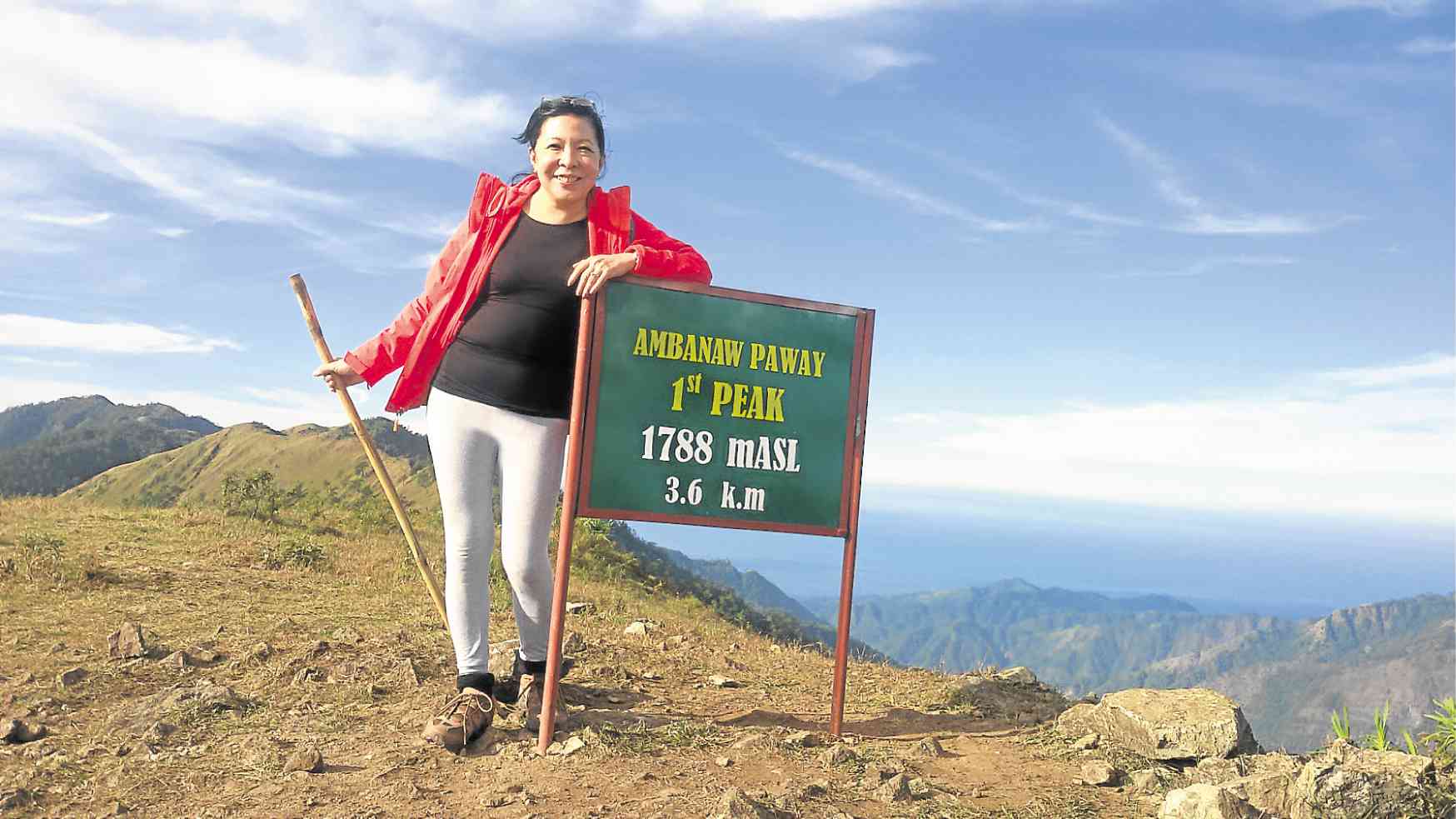 Vicky Veloso-Barrera at Ambanaw Paway, the first station of the Mount Ulap trek in Itogon, Benguet

Designer/writer/culinary expert Vicky Veloso Barrera has proven that a mother in her mid-50s can keep up with 15-year-olds on a mountain hike.

In the past two years, she has climbed four mountains which have tested not only her physical limits, but also her resilience.

Barrera’s first mountain expedition was a fluke. When she was in her early 30s, she organized a trip with friends to Camiguin Island. Japanese-Canadian Lyn Nawata and plant enthusiast Marcos Calvo Roces wanted to see the crater and forests of Mt. Hibok-Hibok volcano. Since Nawata hiked in Edmonton and Roces scoured mountains for rare plants, the hike’s degree of difficulty was minor. Barrera had spent hours on the Stairmaster at the gym.

With a local guide, they started the trek at 5 a.m. The terrain started off on a grassy field which led to a rock wall. After clambering to the next height and confronting slippery skrees (small, loose rocks), they reached a narrow stretch and clung to the rock wall. “There was a sheer drop behind you,” Barrera said. “I would never recommend the climb to anyone else because of this.”

The wanderlust was reawakened in her midlife. The family celebrated Father’s Day by climbing Mount Batulao in Nasugbu in 2015. “We didn’t make it past the third summit because we woke up late,” she recalled. “Always climb early! The sun is not on your side. We lacked appropriate head gear and the physical stamina.”

Last year, her daughter Hannah asked permission to climb with her classmates. As a mother, Barrera had her apprehensions, especially after reading about the subzero weather, treacherous cliffs, precipitous climbs and the trek in the dark.

Fearing that her daughter might hurt herself, Barrera, decided to come along.

To gird for the climb, they stocked up on head-to-foot mountaineering gear at The North Face. They brought energy bars, water, pork and beans in packs, head flashlights and walking sticks.

At the Ranger Station of Camp 1 in Mount Pulag, they went to the Department of Environment and Natural Resources station for an orientation and presented their medical certificates.

The Camp 1 hike didn’t take much effort, yet the place was jarring. “We freaked out at the ‘bathroom situation’—a smelly hole in the ground,” Barrera said. “For a decent place, you had to clamber down a steep hill and walk half a mile.”

She pointed out: “We were supposed to sleep and rest for the nocturnal climb but couldn’t. There was such gorgeous nature around us, pine trees, fog, flowers. It was freezing cold. Over the campfire, the tour guides served hot corned beef with onions and rice al dente. It was the most delicious meal I’d ever had.”

However, the unforgiving temperature made it difficult for them to sleep. At midnight, they woke up for a snack of hot instant noodles, then proceeded to Camp 2.

At the meeting place, Barrera gazed up at the Milky Way before resuming their trek. The torturous climb left the fittest climbers catching their breath.

“It was dark,” she recounted. “The first part of the climb takes you through cloud forest, so it was damp, slippery and scary.” She met fellow climbers who warned them, “Madulas (slippery)! Bangin (cliff)!

She revealed: “After 30 minutes, I asked myself: What the hell am I doing here? Protecting my daughter? These 15-year-olds are doing just fine—I am the one in danger of dying! ”

In the next five-and-a-half hours, only two people at a time could go up the narrow trail. “The rocks formed natural stairs that were very steep,” she said. “You need stamina and willpower and, for me, prayers just to make it to the next step.”

Between Camps 1 and 2, the mother of Hannah’s best friend could no longer walk due to a previous surgery on a broken ankle. Barrera’s husband and the main tour guide stayed behind, while the cook/porter and a 12-year-old assistant led them to the summit.

On reaching Camp 2 at 5 a.m., the cook told his young assistant to take the group to the mountain peak so they could catch the sunrise and the much-touted “sea of clouds.”

“We scrambled, clambered, scraped and clawed our way up just in time for the most majestic sight!” Barrera said.

The feeling of being one with the rolling clouds was exhilarating. She thought she had reached the summit, until she saw Hannah’s classmates climbing to the next mountain.

“There was mount after mount,” Barrera said. “After the fourth one, I finally saw a trail below where most of our fellow climbers were making their way to the ultimate summit.”

Once she reached the peak of Mount Pulag, a flatter path led to the penultimate summit. The level path looked deceptively simple, but required endurance to follow. The tour guide carried Barrera’s backpack to help her climb faster.

After hours of no food and water, they devoured their breakfast of chocolates, the only edible items left in the girls’ backpacks.

The descent took another five-and-a-half hours. On the last kilometer to the Rangers Station, they took a motorbike.

This year, Barrera and Hannah went to Mount Ulap (Cloud Mountain) in Benguet, the trendy new trail among mountaineers. The pine-scented trails, the gorgeous mountain views and cleanliness make up for the arduous trekking, particularly the steep descent.

At this writing, she has climbed Mt. Yangbew in Benguet.

Asked about the benefits of mountain climbing, Barrera replied that it was good for her psyche: “Aside from the view? Aside from feeling on top of the world and knowing that I can survive all the mountains in my life? Aside from the precious bonding with my daughter and earning the respect of her peers? The high, the sense of achievement, the sheer relief and gratitude for having survived—they are priceless!” –CONTRIBUTED