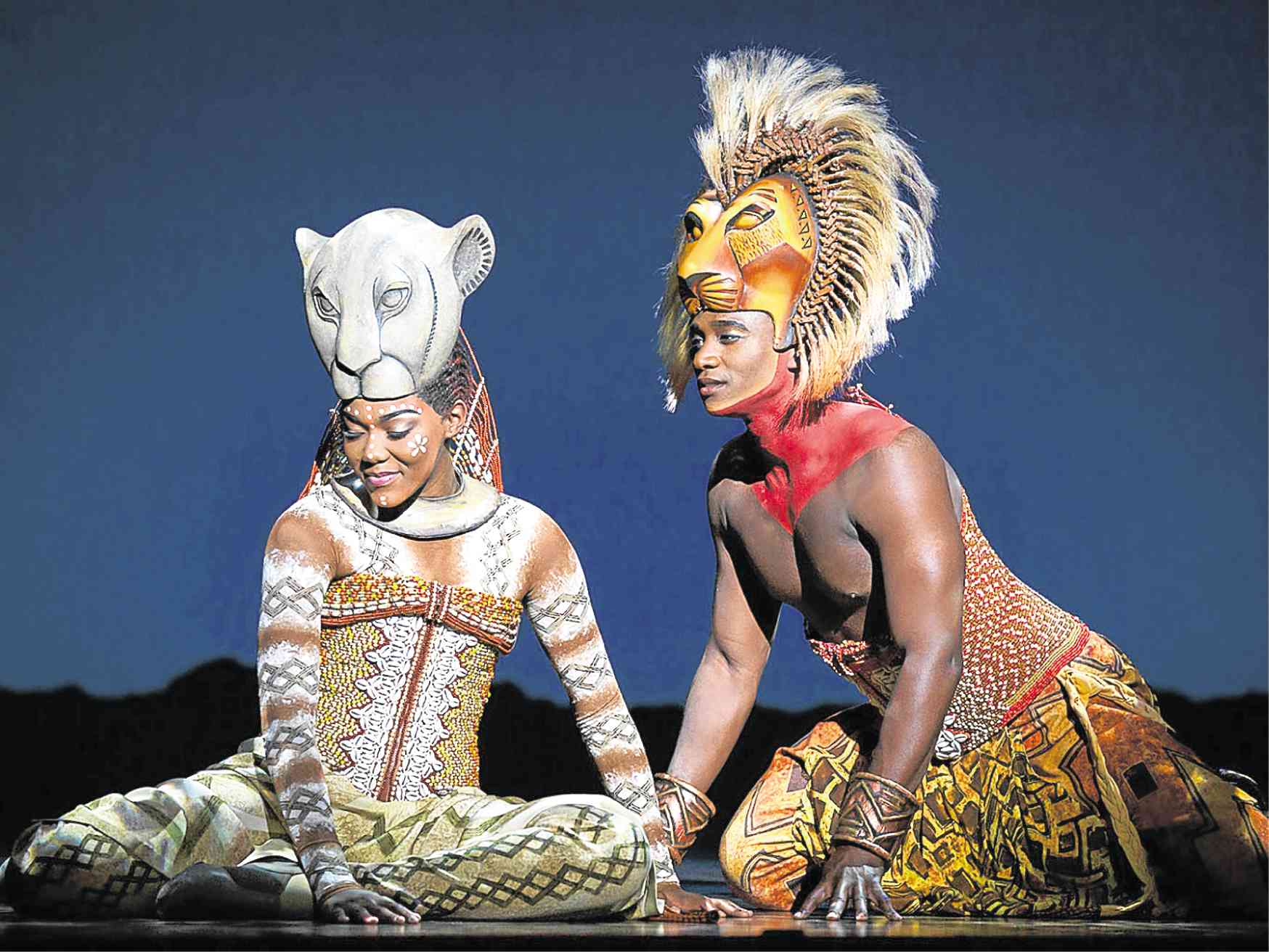 Nala and Simba from Disney’s “The Lion King”

Ingenuity and creativity behind ‘The Lion King’

Touted as the most successful musical production of all time, “The Lion King” has delighted millions of people worldwide, with over 24 productions in 19 countries. The multi-awarded stage adaptation of the well-loved Disney animated classic celebrates its 20th anniversary this year, and has begun a series of shows as part of the celebration.

When you watch a show as spectacular as “The Lion King,” everything is seamless; the acting, choreography, music, production design and even the costumes appear flawless. Perfect. It barely crosses our minds how much effort and creativity it requires to mount such a show.

“The Lion King” International Tour will have its first stop in Manila in March 2018, but preparations for the said tour have already begun.

Associate costume designer Mary Peterson, assistant puppet designer Mike Grimm and associate hair and makeup designer Rowena Hume and their respective teams have flown in to Manila to make sure the costumes, masks, wigs and puppets—many of which are brand new—will perfectly fit the cast members.

Over 50 people are part of the cast, and they likewise visited the country last month to try on the creations that will make them look like they all hail from South Africa, near the Pride Rock.

“The Lion King” creative team is doing its best to provide the same quality of entertainment and the same level of satisfaction for its Manila audience.

“Hopefully if someone from the audience saw it originally in New York and they saw it here in Manila, we hope they don’t notice too many differences,” Peterson said in an interview with Inquirer Super.

Peterson had been working with director Julie Taymor from the very start. It’s her 21st year on the show.

“I think the biggest change from the original production to this will be scenic,” Peterson said.

Nowadays, it’s possible to use laser-cut steel instead of a network of wires for the mask frames, and thermaplastic to take on different shapes that are part of the costumes.

It’s not always “Hakuna Matata” for the creative team. Scar’s costume, for one, is the most complicated, with various elements and mechanisms.

On the other hand, advances in lighting technology greatly affect how the makeup and costumes appear on stage. For Rowena Hume, this comes as an added challenge, apart from the fact that it’s not easy to source and import their materials to Manila. There’s always a need to adjust.

“We want it to be as good as when it first was when it first opened, but there are things that also change for us sometimes. A massive thing for us is lighting. For so many years they used different LED lights, different gels, different things that they used to make sure the show keeps looking fresh. That kind of has an effect on us and we try to kind of adapt to the new lighting which is sometimes warmer, brighter, and our products also change,” Hume said.

Nevertheless, technology has done wonders for the production, and puppet designer Grimm has used it to his advantage in creating Scar and Mufasa’s helmet and electronic masks, among others.

“They have a little finger control and of course we don’t see any of it, but with the head movement they’re able to bring the mask down in front of their faces and then bring it up again. So in order to keep that on their heads, they need to wear helmets,” Grimm explains.

Being part of the creative team for “The Lion King” is both an honor and a challenge to one’s ingenuity and creativity. There’s a need to utilize innovation, and yet there’s also a pressure to maintain standards based on the first production.

Peterson expounds on this, saying, “This show brought to the world of musical theater 20 years ago was drawing the audience in using their imagination because when Julie began planning this with Michael Curry and adding the masks and puppets, one of her inspirations was the whole tradition of African storytelling and Asian storytelling.”

“A surprising challenge is keeping both the liveliness and also the rustic quality. You want that handmade feel. You want things to still look like an individual made it, and possibly a not very skilled individual.”

Although there are standards to adhere to and specific looks to create, Peterson still makes it a point to provide a venue for her team to exercise creativity.

“As somebody who’s worked on the show for such a long time, I’ve always felt that it was important to let the new team members feel ownership on some part of it, that we aren’t just bringing something in and saying, ‘okay, this is how you have to do it.’”

“So what I try to do for costumes anytime we’re coming to a new place and would have new people working on it, especially if they’re building the costumes and not just altering them or receiving them, but they’re making them.”

“I try and make sure that if they feel that or think they have an idea that will work better or make something simpler, that they feel comfortable to talk about that idea and maybe bring it to us because I want them to feel involved in the process and as though they can take pride in being part of the team that way, not just somebody who did a whole bunch of new hems for us or, you know, repaired the beads or repainted something on Scar.”

“I want them to feel like they’ve been a valued part of the team. So I know in our department we try and keep that alive that the creative process is never completely over with. I don’t want it to ever become stagnant and a dead process.”

“And yet we still want the audience to feel as though they’re getting the same product that somebody got 20 years ago when the first audience members sat down to watch our show,” Peterson said.

Disney’s “The Lion King” will run March 18-April 7 at the Theatre at Solaire. Tickets are now available via Ticketworld.