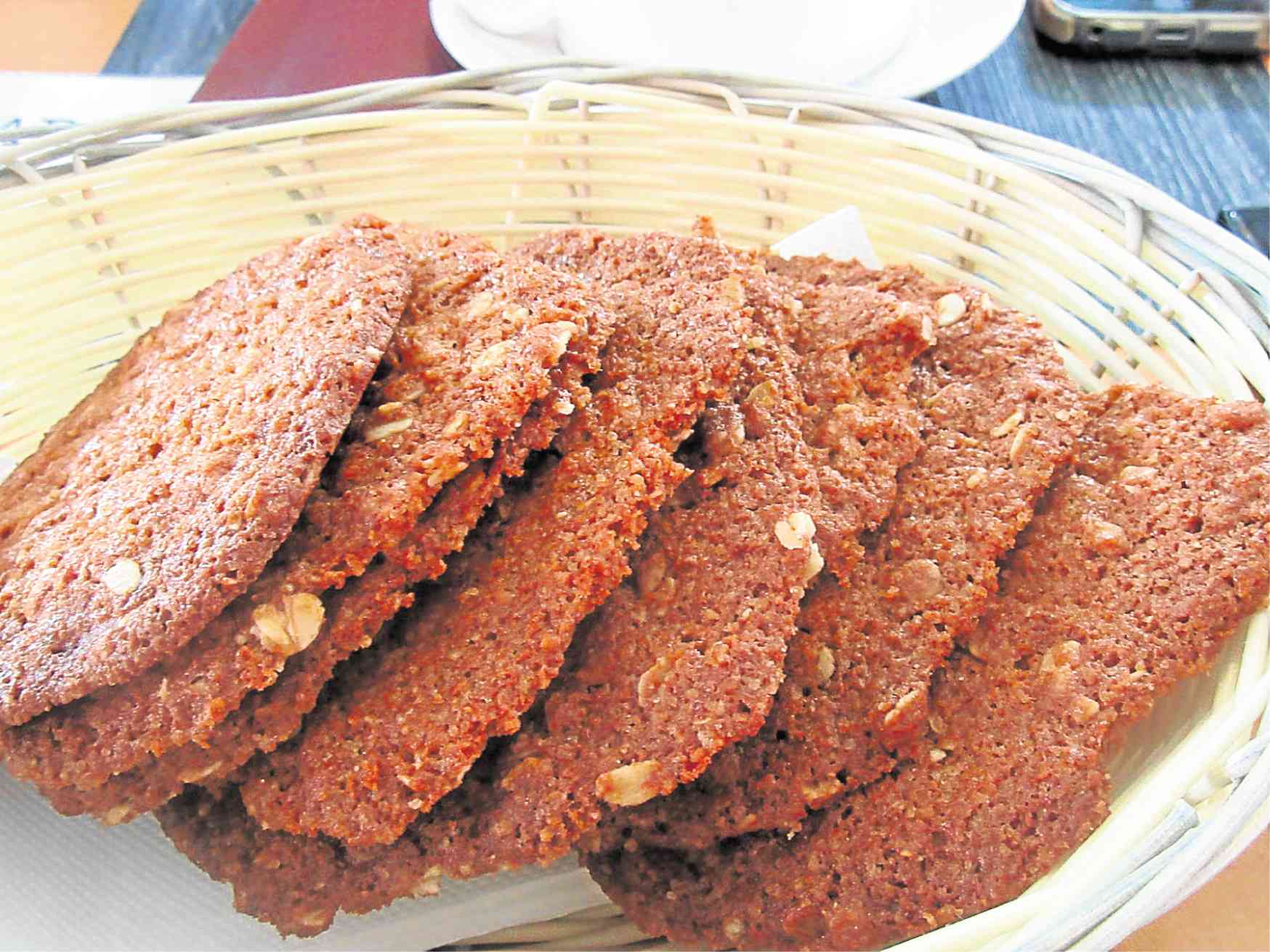 Because we were given only one piece each, I willed the biscuit to last a little longer, relishing every bite. I would also, now and then, surreptitiously eye my husband’s share of the biscuits, since he didn’t seem interested in eating it.

It is said that during World War I, these biscuits were sent by women to the soldiers fighting in the war because the biscuits had a long shelf life and didn’t spoil easily. While some may dispute that anecdote, what’s true is that these biscuits, named to commemorate the heroism of Australian and New Zealand soldiers, are often sold these days in fundraising events to raise money for the veterans and soldiers.

Anzac biscuits are commercially available in supermarkets, but none I’ve tasted before were as good as these ones served on the Riverboat Postman. Crisp at first bite, then subsequently chewy, they were sweet and buttery, with a smoky fragrance and a hint of nuts. They were made from a grandmother’s old recipe, we were told, and whoever that grandmother was, she must have had a warm and caring personality, considering how scrumptious those biscuits were.

Fortunately, the recipe was available on postcards sold on board for a dollar each. I promptly bought one, and for the remainder of our vacation in Sydney, kept looking forward to baking these biscuits in my own kitchen.

The recipe was easy to follow and the results were as delicious as I had expected. However, the first batch came out a bit too compressed and not as thin as the biscuits we were served (they were still crisp and chewy, however). I then adjusted the subsequent batches (the recipe makes about four batches of biscuits), pressing the rolled balls to make them flatter before putting them in the oven.

The biscuits then came out very close to the Anzac biscuits served on the Riverboat Postman.

With Australia Day coming soon (Jan. 26), try baking these biscuits in your kitchen. Not only will you be honoring the wonderful Land Down Under, you’ll also be very pleased with how easy to bake and how delicious these Anzac biscuits are (they make a great baon, by the way).

(From the Riverboat Postman in Hawkesbury River)

Preheat the oven to 350º F (180ºC). In a large mixing bowl, combine the rolled oats, desiccated coconut, raw sugar and flour. Set aside. Melt the butter in the microwave together with the golden syrup.

In a separate cup, mix the baking soda with the boiling
water. Then pour this into the butter/syrup mixture. Add to the flour and oat mixture and blend well. You should have a consistency in which you can roll a soft ball which is not too dry and not too sticky. Add more water, if needed, to make thinner biscuits.

Grease three to four cookie sheets with vegetable shortening or spray them with nonstick cooking spray (see tips). Roll the mixture into one-inch diameter balls and arrange the balls on the greased cookie sheets, leaving about two inches of space between the balls.

Press each ball lightly to flatten them. Bake in the preheated oven, one cookie sheet at a time, for 11 to 12 minutes or until the biscuits are golden brown and crisp.

After removing each cookie sheet from the oven, let the biscuits set on the pan for a few minutes then transfer them to a cooling rack. Makes about 40 to 50 biscuits.

So the biscuits don’t stick on the cookie sheet, before putting the rolled balls on the sheets, brush each sheet with vegetable shortening or vegetable oil, or spray with nonstick cooking spray.

In addition, you can line the sheets with nonstick baking paper. The biscuits will then be easier to remove from the pan.

Make sure to use rolled oats, not instant or quick cooking oats.

Likewise, use desiccated coconut (available in the baking section of large supermarkets), not sweetened coconut flakes.

Keep the biscuits in a tightly sealed container so they remain crisp.