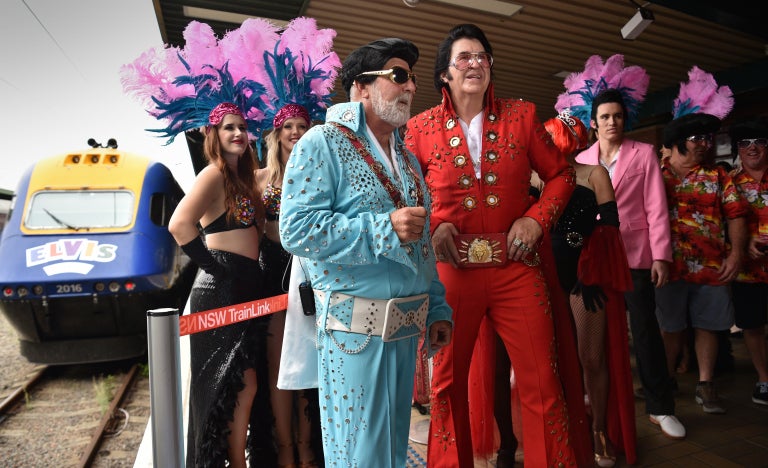 The annual extravaganza, in its 26th year, is billed as the southern hemisphere's biggest tribute to the rock 'n' roll legend -- who died in 1977 -- and attracts thousands of die-hard fans. © PETER PARKS / AFP

Elvis fans shook up Sydney’s Central station Thursday with hundreds rocking to his famous tunes ahead of a special train trip to outback Australia to celebrate the late entertainer’s birthday.

Decked out in their glittering best, the fans were heading to Parkes — a small town some 300 kilometers (190 miles) west of Sydney — on the “Elvis Express” and “Blue Suede Express” trains to take part in a five-day festival.

“He’s such an icon and he hasn’t lost any of that magic that he used to have,” avid Elvis Presley fan Julie Mellae — who wore an orange wig, tiara and fishnet stockings for the special occasion — told AFP.

“In fact, I think he’s developed more, so this festival is like the biggest thing that happens in January. Everyone wants to be on the Elvis train and it’s booked out years in advance.”

Elvis impersonators belted out the legendary singer’s biggest hits on a makeshift stage before the seven-hour train pilgrimage, swiveling their hips and blowing kisses to adorning admirers amid loud cheers.

The annual extravaganza, in its 26th year, is billed as the southern hemisphere’s biggest tribute to the rock ‘n’ roll legend — who died in 1977 — and attracts thousands of die-hard fans.

Last year’s event drew 25,000 people to Parkes, more than double the town’s population, and generated millions of dollars for the local economy.

The town transforms into a vibrant tribute to The King, who would have been 83 this year, with a street parade and non-stop entertainment to keep visitors jiving.

“It’s just everybody’s in a good mood, everybody’s happy, nobody’s cranky,” said David Ward-Smith, who was wearing a specially made “Elvis Festival” T-shirt with his friends on board the “Elvis Express”.

“Up and down the streets (in Parkes), it’s Elvis singers. Every 50 meters, it’s somebody else trying hard. Everybody’s just in party mode, it’s a great little atmosphere. It’s like the Olympics every year,” he told AFP.

Parkes, a mining town with a population of more than 11,000, is famous for its radio telescope which played a pivotal role in bringing Neil Armstrong’s 1969 moon landing to the world.

But the Elvis Festival, first held in 1993 to coincide with the singer’s birthday on January 8, 1935, has since placed the town on the tourist map and also earned it the moniker of “Elvis Capital of Australia”. AB