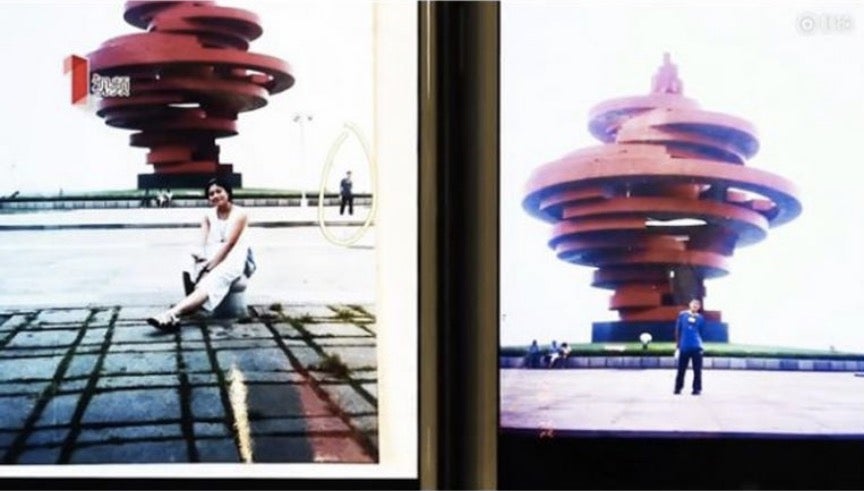 The couple from Chengdu found out that they had both visited the May Fourth Square in the seaside city of Qingdao at the exact same moment in July 2000. PHOTO: Screengrabbed from MIAOPAI via The Straits Times

A Chinese couple discovered how destiny can work in mysterious ways when the man recently discovered that he accidentally photobombed one of his wife’s old pictures.

Mr. Ye had been cleaning up a room in his mother-in-law’s house back in March 4 when he found an old photo of his wife, reported Chengdu Business Daily via Daily Mail. In the photo, she was posing in front of the big red sculpture in the middle of May Fourth Square at Qingdao central business district.

As he kept looking at the old photo, he thought the boy in a blue T-shirt and black pants standing far behind and to the left of his wife seemed familiar, the report stated. When Mr. Ye got back home he dug up an old holiday photo of himself standing in front of the very same sculpture. That’s when he confirmed that it was indeed his 17-year-old self in his wife’s old photograph.

“I was looking at the picture where my wife was sitting in front of the May Four Square, there’s also a man standing at far back. My reaction was: ‘Oh wait, that was me!,’” the report quoted Mr. Ye.

The two photos were taken on July 28, 2000. Mr. Ye went to Qingdao at the time as part of a tour group while his wife Ms. Xue had been visiting her mother. The two would not meet until 2011 in Chengdou, where they were introduced through friends. A year later, they were married and visited May Fourth Square once again.

Mr. Ye said he wants to visit May Fourth Square later on when their twin daughters get older. Alfred Bayle/JB