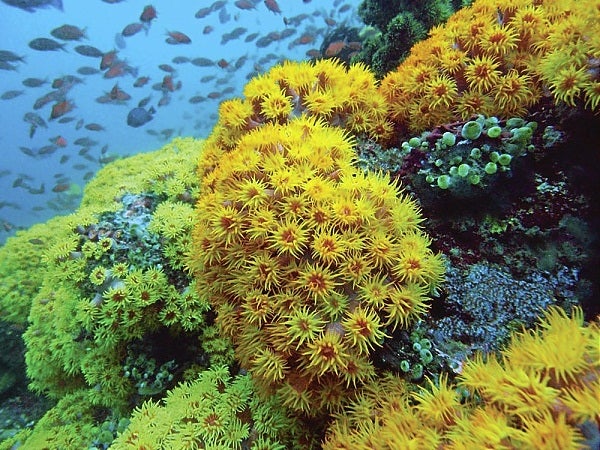 How Marilou Diaz-Abaya found health and healing in diving

As writer, director, teacher and diver, Marilou Diaz-Abaya has never failed to astound. On every occasion where we have had the privilege to observe her, she has always revealed something new in her persona. We come home from the book launch of her latest project, “Reefs of Paradise, a Divine Gallery,” feeling blessed, discerning a holiness, a oneness with the Superior Being we have never yet experienced especially under such circumstances.

When we were done with the picture book she had come up with, in partnership with her medical oncologist, hematologist, bone marrow transplant or stem cell practitioner, diver-photographer Francis Lopez, we felt having gone on a trip and having learned so many lessons from the deep. In Marilou’s sparse but incisively comprehensive text, she speaks of how the creatures of the underwater, from fishes to turtles, sea snakes and mollusks live together as “co-dependents,” which humans could learn to emulate, for a much more balanced ecological-social environment.

Like poetry, her words speak eloquently: “We move in cadence with all the other creatures, choreographed and orchestrated to share space and time in harmony, in symbiosis. There is 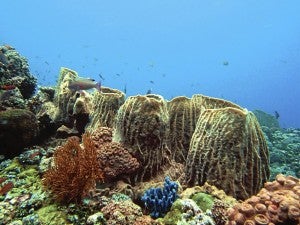 much for us human to learn from reef life.”

Page after page, while admiring the pictures and digesting the text, we find ourselves returning to certain sections, a particular photograph among the 142 in the book. A favorite of Francis is that of the yellow polyps (p. 55). Tita Cory, the most successful advocate of the color yellow, was his patient. He confesses to taking the yellow polyps photos during the last few months of her life. Without verbalizing it, this, too, is Francis’ tribute  to her indomitable spirit. 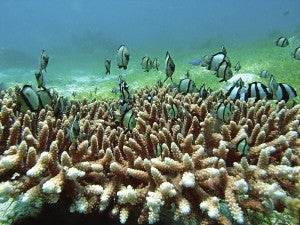 Like Francis, we also have our favorites. One choice perfectly demonstrates through color and variety the enviable co-mingling of God’s creatures (p. 32); while another (p. 93), which shows a family of fishes gliding peacefully among corals, is the perfect photograph in terms of sharpness, composition, light source and message. If we were a judge at a photo competition, I would select this as top winner.

Francis started diving with Marilou barely two years ago. “She brought our group to pristine dive sites in Anilao, places I have never seen before… I was simply awed and mesmerized. These feelings make me wonder that there must be a God who created these living creatures.”

He continued diving at least once monthly with Marilou, taking time out from his medical duties. He explains to patients that diving was his mental break, his means of recharging. For Marilou, it was her break from chemotherapy, after being diagnosed with breast cancer in 2007. In her intro to the book, she writes: “I am convinced that I’ve survived cancer this long partly because of the spirituality of diving in between chemotherapy cycles. Each dive somehow detoxifies me…”

It was only natural they both would conceive of a book of praise and thanksgiving for the gift of life underwater that they wanted to share with others. Ma-an Hontiveros, who wrote the foreword, affirms: “I believe this gem of a book will engender awe and respect for our marine ecosystem… as it gives us a glimpse, not just of paradise, of heaven here on earth.”

Likewise, proclaims Francis: “We have an obligation to be stewards of God’s creation and respect these creatures or ‘gifts’ that were given to us.”

We all know of God’s hand in His Kingdom under the sea. We know little of how this kingdom came about. We go to the Internet for assistance. We learn that coral reefs, dubbed the Rainforests of the Sea, were formed after the last glacial period, and are less than 10,000 years old. Yet they are among the most diverse and biologically complex ecosystems on earth, supporting 33 percent of marine species. They grow in tropical waters which are clear, warm and shallow near the equator, which includes us.

Each coral colony is composed of tiny animals called polyps, which stay fixed in one place, providing food and shelter to a large variety of species. These reefs provide adjacent coasts with protection from destructive tsunami waves; serve as environmental indicators of water quality; prop up economies through tourism; serve as important sources of new medicines. We also learn of how the coral reefs deteriorate and die, many times through man’s irresponsibility and greed.

We are confused as to the difference between reefs and atolls, and go to Marilou for clarification. Apparently, reefs are coral structures and trenches along coastlines, while an atoll is a huge rock formation encrusted with corals, standing alone near coastlines. We read from the book that it takes the Creator a year to form corals horizontally from 1-3 cm, and vertically from 1-25 cm. They have been evolving over the past 200-300 million years to become the largest living structures on our planet, and the only living structure visible from space.

From space? we ask astounded. “Yes, reefs, especially the Great Barrier Reef in Australia,” continues Marilou, “are the only living structures visible from space.”

In 1842, Darwin published his first monograph entitled “The Structure and Distribution of Coral Reefs” where he set out his theory of the formation of atoll reefs, an idea he conceived of during his trip aboard the HMS Beagle at age 25. He began collecting corals in the Chilean Andes which so excited him. Darwin’s “geologizing” led him to theorize that coral reefs and islands were remnants of a sinking landmass. 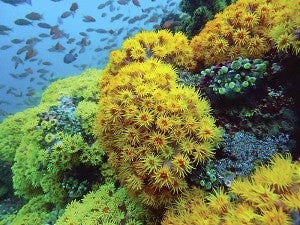 Another book, “Reef Madness: Charles Darwin, Alexander Agassiz, and the Meaning of Coral,” talks of the rivalry between Agassiz and Darwin. A famous natural philosopher and scientist, Agassiz believed that the species was created only by God. This ran counter to Darwin’s theory of evolution. Both parties engaged in heated personal insults and attacks. We never imagined that scientists could have been this emotionally violent.

Reading the book has opened up numerous impressions and possibilities, some humorous, some divine. If, indeed, the creatures of the deep evolved through centuries from a single cell or fungus, there is still that question as to who created that solitary cell.

At book’s end, Marilou has written a Seaman’s Prayer with this excerpt: “Lord, let me marvel at Your reefs resplendent in the colors of salt and light, encrust them in me. Dolphins, whales, mantas, sharks, octopuses, sea horses, lobsters, angel fish, and I sing to your Glory!”