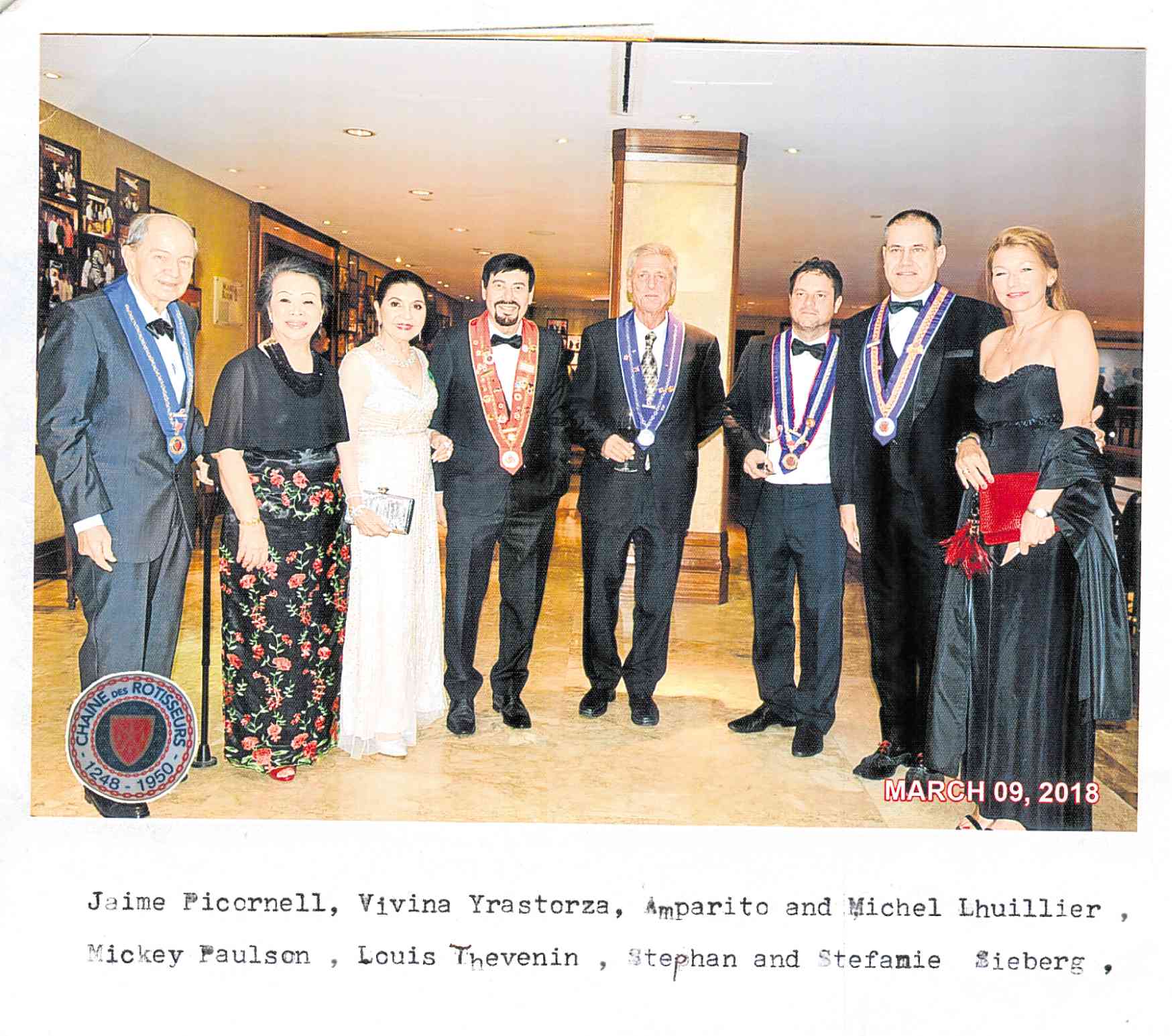 Every time the Cebu chapter of La Chaine des Rotisseurs holds a gala event, it surpasses the previous edition in elegance, efficient service and, most important of all, gastronomy. Which was what happened at the recent induction gala held March 8 at the Marco Polo Plaza Hotel.

Marco Polo Plaza general manager Brian Connelly had promised an unforgettable evening, and this he fulfilled to the nth degree. There was a record attendance of 128 guests, gathered at the mezzanine lobby to sip prosecco by the magnum while exchanging how-do-you-dos.

There was that handsome couple new in town, Stephan Sieberg (the new GM of Radisson Blu Hotel) and wife Stephanie. Michel Lhuillier, La Chaine’s Baili Delegue for the Philippines, welcomed them warmly as did his wife Amparito Llamas Lhuillier, Baili de Cebu.

They presided over the evening’s ceremonies, on a dais, with the rest of the board of directors, Vivina Yrastorza, Teresin Mendezona, David Sharpe and Nestor Alonso, who called the inductees to come forth and be dubbed by Michel with a golden sword on their shoulders.

The ceremonies over, everyone filed into the grand ballroom with four great tables abloom with rare flowers, and gleaming with golden service plates. Behind a curtain of white muslin, a string ensemble from the Cebu Philharmonic Orchestra played, led by Mark Hamlet Mercado and brilliantly conducted by Giovanni Tabada.

For the whole evening they played delightful classical music—Beethoven, Satie, Tschaikovsky, Copland, Leroy Anderson, and many more for over two hours. 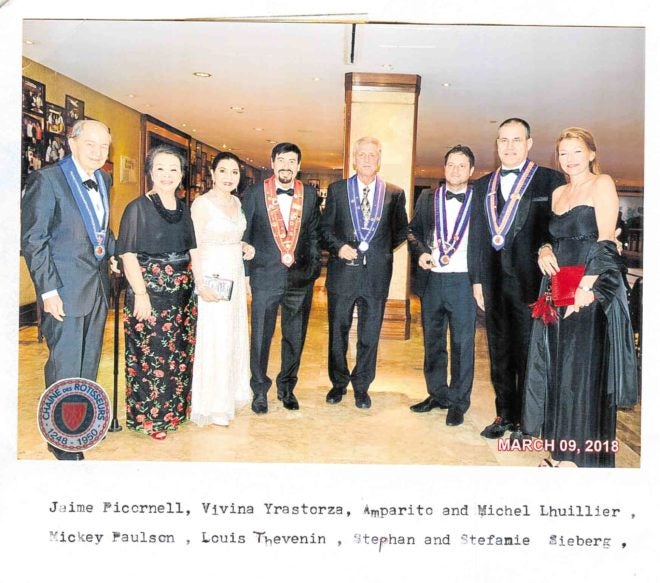 It is much easier to digest rich food with this kind of music playing, agreed Dottie Wurgler, general manager of Marco Polo in Davao, and Lara Scarrow, director of sales and marketing at the Cebu Marco Polo.

The menu was simply delightful, each dish paired with the appropriate wine, specially selected by Mr. Connelly himself. The repast started with a fish trio—smoked salmon, tasik gravlax and pickled herring.

The roasted quail, stuffed with foie, was divine. The sorbet had red and black currant, and surf and turf featured Atlantic lobster and USDA beef.

A board of Italian cheeses was followed by the magnanimous dessert, consisting of miniature cinnamon tart, lemon cheesecake, caramel egg custard, cherry compote and luscious blueberries.

Michel and Amparito with Vivina, Teresin, Dave and Nestor were in the limelight once more to present the evening’s citations for excellence beyond pleasure.

GM Brian Connelly was at the top of the list, as was Joward Tongco, food and beverage manager.

Special citations were presented to the very important pastry chefs—Alex Destriza of the Davao Marco Polo; Darmo Cuevara of Marco Polo at Ortigas; and Gina Arceo of Cebu Marco Polo.

As counterpoint to the evening’s program of classical music, there was a lady DJ who started to play dance music many found hard to resist. Joward Tongco had been true to his timetable, that everything including the awards would be over by 11 p.m.

That dance music really drew out the pent-up energies, and so one could have sung “I could have danced all night.” Well, let’s say up to 1 a.m.