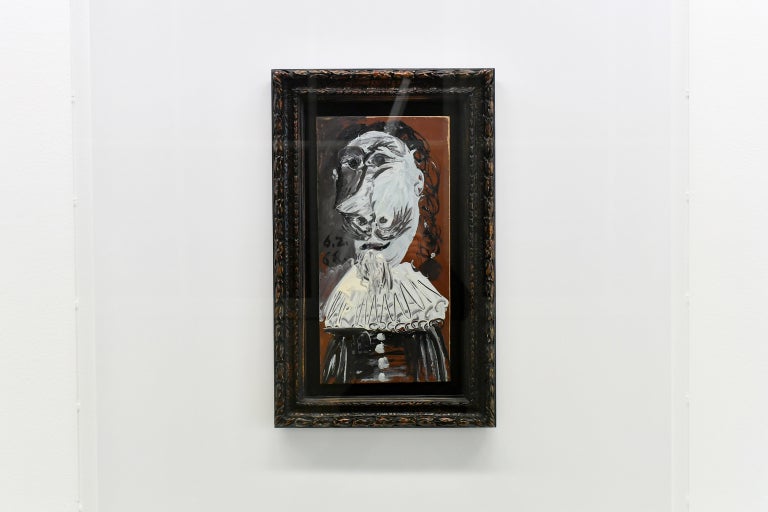 Picasso painting with 25,000 owners on show in Geneva

It won’t hang on the wall in their living rooms, but they own it nonetheless: 25,000 internet users banded together to buy a Picasso painting, which went on display in Geneva on Friday.

Visitors to Swiss bargain site Qoqa usually end up buying a new drill, a set of luggage or a cheap trip to Marrakesh.

But last December, the website that was created in 2005 with the motto: “We do anything, but it’s all for you,” proposed a painting by none other than artist superstar Pablo Picasso.

Over the course of three days, 25,000 people purchased 40,000 shares, at a price of 50 Swiss francs each, to become the proud owners of the artwork.

Qoqa’s main objective with selling a work by arguably the most famous artist of the 20th century was obviously “to go viral” and get people talking about the website, company chief and founder Pascal Meyer told AFP.

But standing in the middle of the site’s open workspace, with its young, hip staff bent over laptops, the 37-year-old stressed the move had also been inspired by a desire to democratise the art world, which he said was often viewed as “closed and obscure.”

“When we launched this idea, people told us to forget it, that it was just impossible,” said Meyer, who like the rest of Qoqa’s workforce adheres to a no-tie policy.

“And then when we started talking about Picasso, people said, ‘now that is doubly impossible.’ So the challenge was irresistable,” he enthused. “We said: let’s do this thing. Let’s try… to democratize this area, which seems so inaccessible to regular people.”

The company gathered a team of specialists to certify the authenticity of the painting, but also to ensure that the price was fair.

Meyer refused to divulge how much Qoqa paid for the 58 x 28.5-centimeter painting, which portrays what looks like a man with a pointy beard and moustache, and a lacy collar.

He said only that the company bought it from a European seller who did not wish to be identified.

In the “musketeer” spirit of the painting, the owners have basically made a vow of “all for one, one for all” by pool decisions on where it will go on display. Geneva’s modern art museum MAMCO was on Friday the first to receive that honor.

Director Lionel Bovier said he had been smitten by the project.

For the reputedly high-brow museum, associating with the crowd sourcing scheme could serve to help broaden its appeal beyond the elitist crowd it usually attracts.

“The main interest for us is to foster a broader group of visiters…, to reach out and address this group of people who have become owners of the painting,” Bovier told AFP.

“We hope to draw the biggest crowd possible from this group of 25,000 people,” he said, adding that most of the buyers were from the French-speaking part of Switzerland.

Each owner has been issued his or her own card, bearing individual numbers and a picture of the painting, allowing them to come and admire it at will, for free.

Bovier said he had drawn on Qoqa’s technological know-how to display the painting in an original manner, using among other things a webcam and an interactive platform, PiQasso, which will be available through the Qoqa site.

A 3D scan of the piece has also been made, allowing visitors to stroll through it.

“There are lots of little things that will make this a bit more sexy and bit less boring,” Meyer said with a laugh.

The museum meanwhile will offer a range of meetings, conferences and other activities around the painting, Picasso and also the conservation work museums usually do behind the scenes, Bovier said.

The “Buste de mousquetaire” is set to remain in Geneva until October. It will be up to its owners to determine where it will go next. JB