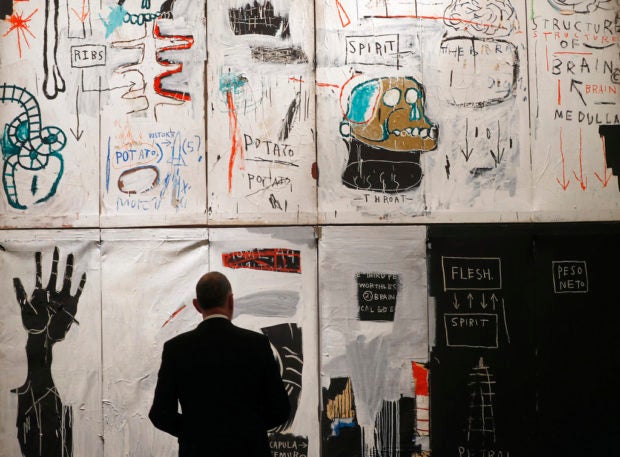 FILE- In this April 9, 2018 file photo, a man looks at the painting entitled 'Flesh and Spirit' by Jean-Michel Basquiat, in London, Prominent art collector Hubert Neumann has filed a lawsuit against Sotheby's auction house on Thursday, May 3, 2018, seeking to block the artist's daughter from selling the masterpiece that's worth an estimated $30 million. (AP Photo/Frank Augstein, File)

NEW YORK — A prominent art collector has filed a lawsuit against the auction house Sotheby’s to block his daughter from selling a masterpiece by Jean-Michel Basquiat that’s worth an estimated $30 million.

Neumann’s wife, Dolores Ormandy Neumann, signed a will before her death in 2016 leaving most of her estate to Belinda Neumann and disinheriting her husband.

Hubert Neumann, 86, is disputing the will, which he alleges is invalid because it was executed while his wife was receiving serious medical treatment.

He also contends in his lawsuit that the Basquiat sale violates an agreement with the auction house that gave him a say in how works from his family’s collection are marketed.

According to the lawsuit, Sotheby’s promised Neumann that it would seek his approval on “all matters relating to cataloging, placement, and exhibiting each and every work consigned.”

The lawsuit charges that Sotheby’s capitalized on a “difficult family situation” by entering into an agreement with Belinda Neumann to sell the painting.

The 12-foot-by-12-foot (3.6-meter-by-3.6-meter) painting is to be auctioned at Sotheby’s in New York on May 16.
Sotheby’s said in a statement that Neumann’s “eleventh hour claim” is entirely without merit.

The auction house added, “We are confident that the ‘agreement’ Mr. Neumann relies on does not exist and the court will find in our favor and the auction will proceed as scheduled.”

Belinda Neumann did not respond to a request for comment.

The Brooklyn-born Basquiat rose to fame as a graffiti artist in the late 1970s. Dolores Neumann befriended Basquiat during his brief career, which ended with his death in 1988.

Sotheby’s sold a Basquiat painting, “Skull,” for $110 million last year. The sale set an auction record for a work by an American artist. MKH