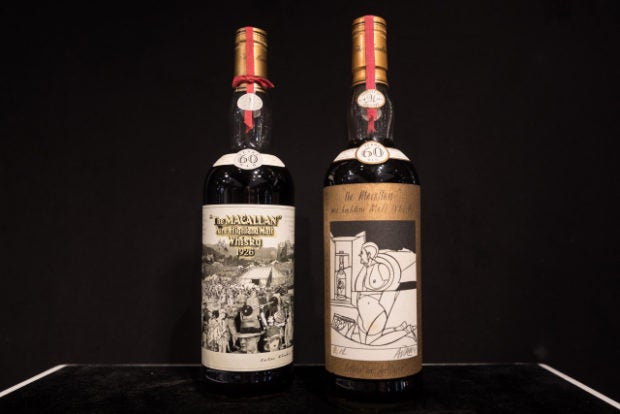 Two bottles of whisky, Macallan Peter Blake 1926 (L) and Valerio Adami 1926 (R), are displayed ahead of a Bonhams auction in Hong Kong on May 18, 2018. Whisky prices have soared in recent years, with buyers shifting their attention from the bigger names to rare bottles from Scotland and Japan among others, according to Bonhams. © Dale DE LA REY / AFP

Two bottles of rare 60-year-old Macallan whiskey fetched a total of more than $2 million under the hammer on Friday in Hong Kong, Bonhams said, with both sales shattering the previous world auction record for the spirit.

The other bottle, whose label was designed by Italian artist Valerio Adami, went for HK$8.63 million, a new world record for whiskey sold at auction.

Both 750-milliliter vintage bottles were distilled in 1926 and matured in a sherry hogshead cask until being bottled in 1986. Only twelve of each Macallan were ever produced.

“These two bottles are not meant for sale. They were given to some of the Macallan’s most loyal business partners or clients,” said Daniel Lam, head of wine and whiskey at Bonhams in Hong Kong.

Whiskey prices have soared in recent years, with buyers shifting their attention from bigger names to rare bottles from Scotland and Japan among others, according to Bonhams.

In 2014, a bottle of malt whiskey — Macallan ‘M’ Decanter six-liter Imperiale — set the last record of HK$4.9 million at a Sotheby’s auction in Hong Kong.

The value of Macallans 18 years and older has doubled in value over the past year, Lam told Bloomberg News in an interview.

While new whiskey tends to be more industrialized, in the ’80s and before that it was handcrafted, Lam said, adding that well-kept whiskey can last forever.

In April, two other 60-year-old Macallans from 1926 were sold at a Dubai airport retailer for $600,000 each, breaking the record for the most expensive whiskey sold in retail.

There is growing interest in whiskey in Southeast Asian countries such as Vietnam, Thailand and Indonesia, as well as in China, Bonhams said, especially among a younger generation of collectors.

“Whisky is more like a young generation drink now, compared to cognac or even red or white wines,” Christopher Pong, wine and whiskey specialist at Bonhams, told AFP.