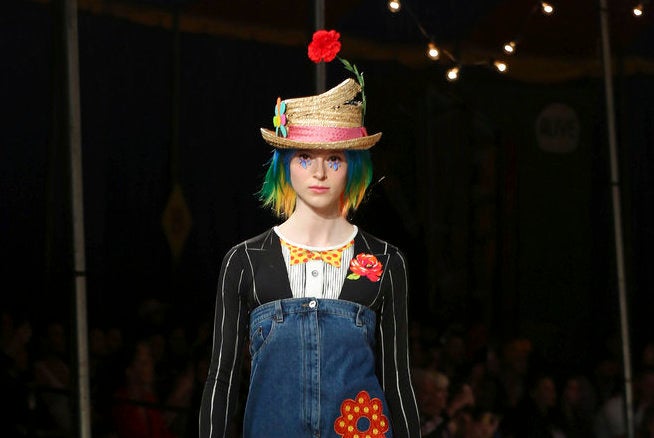 Model walks down the catwalk at the MOSCHINO Spring/Summer 2019 Menswear Resort Womenswear Show and Party on Friday, June 8, 2018, in Burbank, Calif. (Photo by Willy Sanjuan/Invision/AP)

BURBANK, Calif. (AP) — Leave it to Jeremy Scott to make the circus couture.

The Moschino designer known for his whimsical collections and theatrical flair threw a big top bash Friday complete with circus performers and a Ferris wheel for the brand’s women’s resort and menswear collections.

“There is like a muscleman lubed up!” said actress Jamie King, eyeing a pre-show performer in animal print briefs. “It’s very Moschino.”

His troupe of runway rock stars worked the tent in spectacular sequins, a rainbow of contrasting patterns and textures, shimmering top hats, tiny parasols and some groovy 1960s-style bell bottoms and peace signs thrown in for good measure.

“It is a real spectacular!” said Scott before the show at the Los Angeles Equestrian Center. “I love kind of anything that’s like a razzle-dazzle.”

Scott’s modern ringmasters wore gold-embroidered tracksuits, while the strongman strut his stuff in a leopard print leotard with barbell in tow.

Clowns of every color came complete with oversized coats and trousers, gigantic bowties and neckties that draped to the knees.

“This circus tonight is everything!” said Jenner. “He’s got such an imagination, such great creativity.”

It was a family affair for Stefani who’s busy prepping for her upcoming Las Vegas residency. Scott is designing the costume for Stefani’s grand finale in her “Just A Girl” show, opening June 27.

“Honestly, it’s like one of those things where he’s invited me to everything he’s ever done,” said Stefani. “And I never can come because I’m a mom so I have to pick and choose. So I just ended up saying, ‘OK I’m coming and I’m bringing all the children!'”

The circus celebration came to a close with an intricately beaded gown, a dramatic feather headdress and some stunning aerial acrobatics.

“We need to have some joy and fun and that is my role,” Scott said. “If I can put a smile on people’s faces or bring people out of kind of doldrums for a moment, then I’ve done my job.” NVG