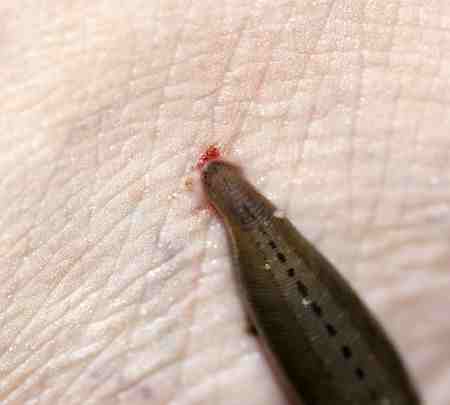 Every now and then, one hears news about strange, almost twisted chance-encounter relationships between mankind and the rest of the animal kingdom. Such is the case for a 51-year-old Chinese man who harbored a live thumb-sized leech on his right nostril for two weeks.

The viral video of the leech extraction made by Dr. Liu Xiongguang of Beihai People’s Hospital in South China was uploaded in the Chinese microblogging site Weibo by Changsha Legal and Legislation Channel, and reported by the Mirror last Wednesday, June 6.

Dr. Liu painstakingly used forceps to widely open the man’s nostril, and then pulled out the bloodsucker with tweezers. The pained expression of the man conveyed how much the whole procedure hurt.

The man’s astonishment was evident as soon as the wriggling leech was finally pulled out. He seemed to have been unable to process the fact that he had harbored such creature on his nose.

Meanwhile, Dr. Liu was calm throughout the whole process. His nurse, however, appeared to be frightened beyond belief.

The 51-year-old man who came back from work in Yunnan province went to Dr. Liu complaining about nose pain. Apparently, he had been suffering from nosebleeds for more than 10 days, the report said. His wife said she saw something emerge and disappear in her husband’s right nostril.

It was not explicitly explained how the Chinese man obtained his nose visitor, but as per report, it is speculated that the man acquired the leech after swimming in a river. Kate Matriano/JB

Man hears cockroach scrambling for its life, then dying in his ear