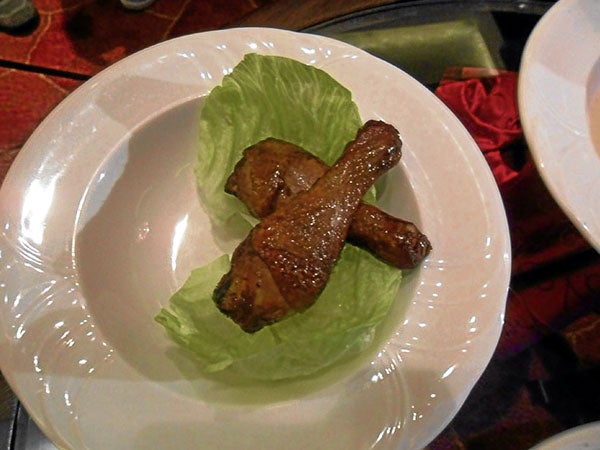 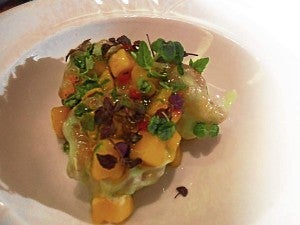 CHEF SAM Leong held a demo at Makati Shangri-La recently, where he was juror in a competition, and flew out the next day. Very few knew he had visited Manila before. What he remembered of his 2004 visit was the earthquake that rocked his hotel in the evening. But what I remember was the crisp fried prawn in wasabi mayonnaise with mango salsa which he did effortlessly for the cooking demo.

“You get a sense of the adroitness of a kung fu exponent,” wrote Julie Wong in Star Online of Malaysia.

He still looks as young as he did then (though he is near 50), and still sporting a diamond earring. He said that for his new Manila visit, he would like to experience more than just earthquakes.

That first time he was here, it was bewildering to imagine how this young chef was director of the Tung Lok group of restaurants in Singapore which consisted of some 20 outlets. Just operating one seems hard enough, but 20? His fame (or infamy according to conservative Chinese diners) was achieved at the Chinese restaurant of the Four Seasons Hotel, Jiang Nan Chun, where he introduced single-served Chinese dishes, a radical approach at the time.

Today, that course by course, individually plated service for Chinese food, is no longer surprising. But Leong said that at the time, he thought of practical solutions to dining problems. Businessmen need to finish lunch quickly and dim sum pieces, which usually number four in a steamer, creates a “who-gets-the-last-piece” puzzle for a group of three.

Aside from changing the Chinese way of eating, Leong said he also wanted to be a different Chinese chef, who’s usually hidden in the kitchen. He wanted to be like Western chefs, like Alain Ducasse, who went around the dining room and socialized with diners. 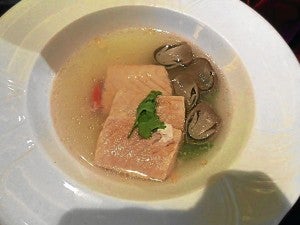 Sam Leong’s wife, Forest, also did a cooking demo that day. Both of them run a cooking school, [email protected] Cooking School, which they put up after Leong resigned as corporate chef of the Tung Lok Group in 2008.

The courses offered are three-hour sessions. If you want to access the website, you’d have to type, and here Leong wrote the address in the air, moving sideways as he did so, “samatforest.com.” We found that hilarious maybe because Forest Leong had us laughing earlier from her asides. One of those had to do with adding just the right amount of dark soy sauce to the roasted chicken with lemongrass or else it would end up as “African chicken,” she said.

Forest is Thai, one of the apprentices in one of the kitchens he worked at, said Leong. I presume that must have been Novotel in Bangkok where he succeeded his father as executive Chinese chef when the father died of cancer.

Leong, who was born in Malaysia but is considered a Cantonese chef, has won many awards such as the World Gourmet Summit’s Executive Chef of the Year and Chef of the Year. He is also the author of three books and is part of the International Culinary Panel of Singapore Airlines together with chefs Georges Blanc of France and Gordon Ramsay of the United Kingdom.

That means their signature dishes are featured in the first and business class menus of the airline, though Leong said he had to redo his recipes to make it viable to be served a day after spending time in the freezer then reheated before serving. Just imagine, he said, not having the required crunch of the prawns in his signature dish. 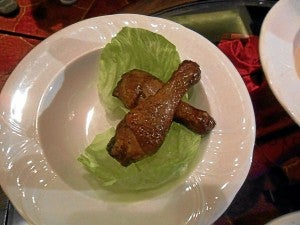 Leong also demonstrated avocado cream with coffee ice cream, a fast way to do dessert with only basic sugar syrup and water added to the avocado. Those of us who remember summers with avocado commented that the creamy avocado would have been turned to ice cream here instead.

Forest Leong opened the demo with tom yum salmon, though her version was a light soup slightly sour and spicy much like the Visayan tinola or tinowa. She punctuated each ingredient with health benefits—lemongrass gets rid of air in the stomach—and giving the most important tip yet—add the salmon and seasoning after the boiling so as not to overcook the fish and to prevent the acidic lime from becoming bitter.

The lunch afterward consisted of those four dishes, served individually by course. It was a relief not to wait for my turn at the lazy Susan.