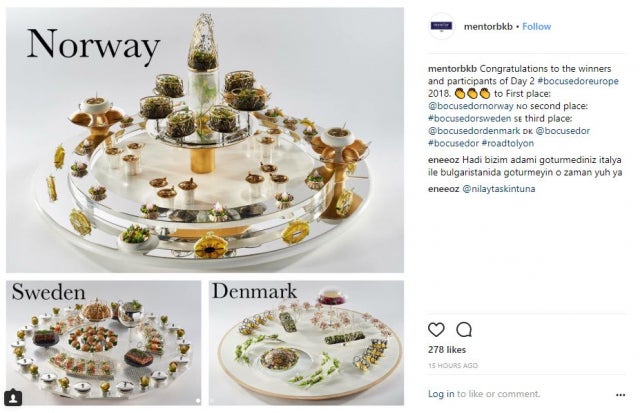 It was déjà vu again at the Bocuse d’Or Europe competition which wrapped up Tuesday night, with a triumvirate of Nordic countries taking the podium.

Rounding out the podium were Teams Sweden and Denmark.

Norway has collected 10 gold, silver or bronze medals (including five gold trophies) at the Bocuse d’Or grand finale since the competition first launched in 1987. The Bocuse d’Or takes place every two years in Lyon.

Likewise, Sweden and Denmark have had their fair share of wins: Sweden has stepped up to the podium six times for either gold, silver or bronze medals, and Denmark five.

In a pressure-cooker environment, in front of an audience of 1,300 supporters, 20 chefs from across Europe were given 5.35 hours to churn out a meal worthy of the late Paul Bocuse’s approval using this year’s key ingredients: Piemonte beef fillet, rice from the local Baraggia Biellese fields and calf sweetbreads.

For the first challenge, chefs must present their dishes on 14 individual plates, while the second challenge requires presenting the food on a silver tray.

By winning the continental competition, Norway, Sweden and Denmark have secured their places at the grand finale, which takes place January 24-25.

Other European countries which made the cut include Finland, France, Belgium, Switzerland, Hungary, Iceland and United Kingdom.