How hot are your breasts? | Inquirer Lifestyle ❮ ❯ 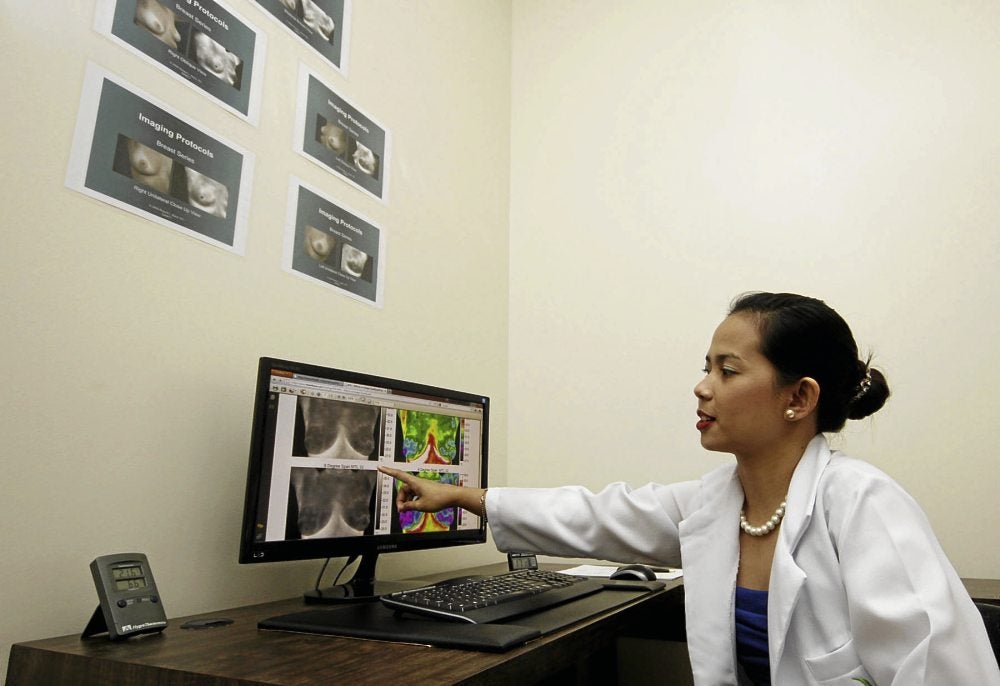 How hot are your breasts?

Besides Israel.  Reports from the Philippine Cancer Society and the Department of Health place the number of new breast cancer cases diagnosed yearly at 9,300—about one woman every hour.  A third of these cases, or around 3,000, end in death each year, and sadly because most cases are detected when the cancer has reached an advanced stage.

The fight against breast disease in the Philippines has thus shifted focus to early detection, and alongside that, education on the services and options available to achieve this. Recently, the field of options for screening for breast disease has expanded with the introduction of Breast Thermography in the country.

Thermography is the medical application of the technology known as Digital Infrared Thermal Imaging (DITI), first discovered in the 1970s. It is simply the image cast or created from an infrared recording of variances of temperatures in the object scanned.  It’s not difficult to understand how this technology was initially and effectively applied in military surveillance and combat, as the ability to detect variances (or differences) in temperature, for instance in a building or in a dense forest, boosted the capability to detect the presence of warm bodies.

Down the line came the development of infrared thermographic cameras, which opened the door to the application of the technology in the field of medical diagnosis. Its most recent application is the detection of possible cases of communicable diseases such as bird flu or swine flu among travelers coming through the airport.

In much the same way that a camera captures images so does a thermographic camera, except that the image formed is based on temperature readings.  The principle behind its use as a diagnostic tool is that “hotspots” in the body are usually indicators of problem areas, so a thermal reading of where these higher temperature areas are can serve as a guide for potential health risks.

While thermography is already being utilized as a diagnostic tool in a few hospitals in the country, the cameras and equipment are primarily geared to scan the entire body.  Realizing the potential and capability of the technology to address specific medical issues, however, a pioneering team of doctors and medical professionals has opened InfraMed, a dedicated breast thermography company, the first ever in the Philippines.

The procedure is performed at the InfraMed Breast Thermography Center at the Bonifacio Global City in Taguig City, where a pre-examination protocol is observed prior to the examination.  The actual process involves standing naked from the waist up in front of the Thermal Imaging Camera while a technician takes digital photos of the breast. The computer monitor, where the thermal image appears, is visible to the patient so she is able to better understand the process.  The actual period of time spent before the camera is about 5 to 15 minutes but the entire process, especially for first-time visits, may take a half hour or so, because it includes an orientation and medical history taking.  The patient will also be required to spend a few minutes in a temperature-controlled room.

The images are then sent to a certified physician for an analysis of the amount of heat recorded from the surface of the breasts, and the symmetry of the heat patterns.  These patterns could indicate infection, inflammation or a variance in the body’s usual profile. This report will later be e-mailed to the patient, with recommendations for the next possible steps to be taken.

The main advantage of breast thermography is that it is non-invasive and involves no radiation, contact or compression of the breast, explains Deena Garcia-de la Cruz (no relation to this writer), whose own experience in taking an active role in her personal health management has led her and husband Jose Santiago A. de la Cruz Jr. to bring the pioneering technology to the Philippines.  From a medical point of view, adds Dr. Roberto V. Ramos, the center’s medical consultant, the procedure provides the earliest possible detection of risk from most forms of breast cancer.

The images captured by the infrared camera are sent by InfraMed to the United States, where they are read and analyzed by Dr. Robert L. Kane, who has 15 years of experience in thermal image interpretation.  Kane’s report will indicate, based on the thermal imaging, the risk level for cancer and corresponding recommendations.

But breast thermography is not an alternative or replacement for mammography, De la Cruz and Ramos clarify.  “It’s meant to be complimentary.  What it can do, based on the temperature readings, is assess the likelihood that a mass exists or may develop in the future.  So it provides the earliest possible detection, and thus point you towards the possible options to proceed,” Ramos explained. •