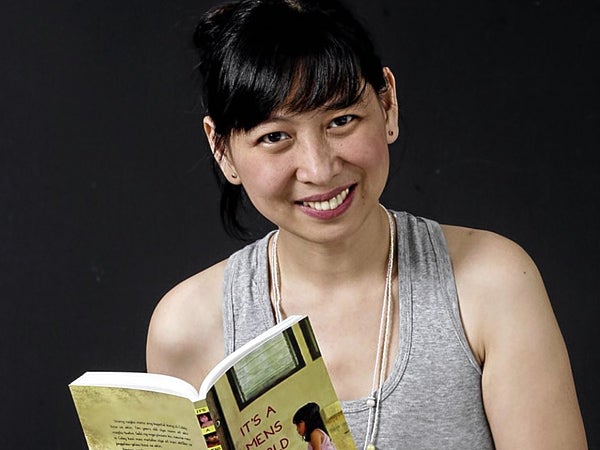 She just can’t help herself. Within five minutes of meeting her, Bebang Siy will make you laugh. She’ll take her pretty, fair-skinned features and contort them into a rubber face worthy of a slapstick comedian. She then sizes you up and spit out a perfectly-timed zinger. In machine-gun Filipino, she’ll make you laugh out loud—you won’t be able to help yourself.

That’s Bebang, being spontaneous in person. Wait till you read her.  She just might be the funniest Filipino writer at the moment. The pieces in her book, “It’s a Mens World,” tackle everything: from the meaningful timing of a girl’s first menstruation (the “mens” in the title) to the semiotics of dating; from the origin of nicknames to classroom friendships. But wait, her writing isn’t just humorous—it’s also serious because it’ll make you think.

There’s a reason the 32-year-old Bebang was chosen by the Philippine Daily Inquirer as one of the country’s 26 young people to watch. She’s often been compared to the popular pseudonymous best-selling phenomenon Bob Ong—but with ovaries.

But getting to be funny was not always easy for Bebang. Before she learned to make other people laugh out loud, she lived a quiet life, looking around and taking note of a world that seemed to be anything but humorous.

Beverly Wico Siy was born on December 10, 1979 in Quirino, Manila to Roberto Siy and Resurreccion Wico, the eldest of five daughters. Her father was Chinese, a longtime smoker and drinker who managed a rice store and was part of a jueteng racket. He died from a heart attack when Bebang was 15. Her parents had met when her mother Resurreccion was working as a waitress.  Her mother had worked many jobs previously: she peddled fruits and Christmas décor and even delivered lunch to a gambling joint.

After her parents separated when she was very young, Bebang and her sisters became the object of a tug-of-war between them. In her book, Bebang recounts how her father essentially “kidnapped” them and so she wound up living in Ermita with him until his death. She then moved in with her mom, which explains why she went to three different elementary schools in Ermita, Parañaque and Malate before going to high school at the Philippine Christian University Union High School.

Not surprisingly, given all the turmoil in her young life, Bebang was a very quiet child.  Later, she became the class clown. “Maybe it was because of my awkward years,” she explains. “I didn’t know how to face them.” As she entered her teens Bebang became very talkative. In high school and among classmates she had known since grade school, she made a lot of friends.  “I made a lot of jokes because I wasn’t very comfortable with myself at the time. I was very skinny and sweated a lot. I had big teeth. I looked weird, so I did a lot of pang-aalaska (making fun of other people) so their attention wouldn’t be on me.” It was also in high school that she began writing, though in English originally. She would switch to Filipino in college.

In 1996, Bebang was admitted to the University of the Philippines in Diliman but had to choose a non-quota course to get in. Bizarrely enough, she originally wrote down geodetic engineering as her first choice because she thought her math skills would make her well suited for it. She was quite proficient in math as well as English. BA Malikhaing Pagsulat (Creative Writing) was her third choice. By the time she found herself standing in front of the UP admissions office, Bebang had crossed out her first and second choices, tossed a coin and enrolled in Malikhaing Pagsulat.

She would last for only one semester, though, before she had to leave UP—at least for a while.  Because of her financial difficulties, Bebang had taken out a student loan to attend UP but found that she could not pay it back. Hiding became an option. “I was so scared, having that debt,” she says. Like her mother, she took on an assortment of odd jobs. She worked as a sales clerk at a pawnshop, a sales staff at a clothing store and found herself in direct selling for Avon and later, Sara Lee.

It was when Bebang gave birth to son Sean Elijah—“EJ” for short—in 1999, that everything changed. “I realized that if I really wanted him to have a future, I should not be in this kind of job.” Plus she had promised her father at his funeral that she would finish college. This shifted her direction to an upwards trajectory. (Today, the single mom dotes on 13-year-old EJ.) Working as a nurse enabled her to save up and re-enroll at UP.

Her job history includes working for an NGO called Creative Collective Center, Inc., freelance writing and teaching English to Korean students and Filipino at the University of Santo Tomas. She’s been working for two years now at the Filipinas Copyright Licensing Society, Inc., or FILCOLS, a group of writers and publishers who banded together to protect the copyrights of Filipino writers.

The material in “It’s a Mens World” started out as part of a different book project and was submitted to writer Vim Nadera’s class when Bebang began working towards her Masters in English Literature at UP.  It was Nadera who told Bebang that her book-length manuscript was ready for publication so she should go find herself  a publisher.

With the encouragement of fellow writer and FILCOLS colleague Abdon “Jun” Balde, Jr., Bebang thought of approaching Anvil Publishing, but discovered that its forthcoming publishing schedule was full. A chance encounter with Anvil’s Publishing Manager Karina Bolasco revealed that one of Anvil’s writers had failed to deliver a manuscript on time. And so Bebang took the slot. “I was very, very lucky.”

“It’s a Mens World” came out in September and since then, Bebang has been hustling to sell the book. “I beg my friends, ‘sige na, bumili na kayo,’ and they do and find it funny.” The book has done well and its author is now sought after as a speaker, thanks to her offbeat humor and sparkling repartee. There’s a second book in the works, tentatively titled “It’s Raining Mens,” all about the men in Bebang’s life, a self-admitted experiment in that it mixes fiction and nonfiction.

A Great portion of Bebang’s humor is laced with reflection. Much of this comes from her background growing up poor—or worse. “We didn’t have a lot of money for the usual luxuries that other children enjoy,” she recalls.  “Our toys were hand-me-downs and we rarely had new clothes.”

The half-Chinese Bebang also grew up surrounded by Chinese conventions. All of these figure in the mix that is her book.

This process of growing up Pinoy informs Bebang’s work, as does the observational humor that one quickly realizes is part of her everyday attitude. “People laugh when you are very straightforward. I don’t know why. I don’t find it really funny but people laugh when I talk about things that are very honest. It’s like Kris Aquino because she says everything that’s on her mind. That’s when what I say becomes funny.”

Bebang adds that she derives a lot of her humor from her family. “When you meet them, you’ll see that I’m the tamest among them, especially my mother. My mother is a very strong and funny person without her knowing it or her intending it to be.”  Bebang then launches into a ridiculous but inevitably true story about her mom that ends with a killer punch line from her mom. Yes, she is very much her mother’s daughter.

People may expect Bebang to be funny all the time, but she gets pretty serious as well. It bugs her when people don’t fight for their rights. She gets passionate in her avowed mission to protect Filipino writers from being abused. Like other celebrities in the limelight, she finds that being energetic and on all the time can get tiring. After a reading, a talk or a hosting job, she also gets wiped out. “I can hardly talk afterwards. I get tired making people laugh, too.”

The inevitable christening of Bebang as a distaff Bob Ong makes her blush as she’s flattered by the comparisons but worries that it might insult Bob Ong. “I feel embarrassed that I’m being compared to him because I think our writing is quite different. And he inspires me. When I read his first book, I said I could write something like this but from the point of view of a girl. This guy can’t write about menstruation because he’s not a girl. I was also inspired because his language is very conversational. Reading his book was just like talking to a friend.”

Another writer told her that there hasn’t been another female writer as funny as her, save perhaps for Jessica Zafra, who writes in English. “Maybe it’s because a big part of what makes Bob Ong funny is the language and the tone. I think that it’s the same thing that charmed my audience, the language, the tone and my being a woman, my sexuality,” Bebang says. “Walang babaeng ganito kabalahura (there’s isn’t another woman so outrageous). Sobrang candid siya at nasa wikang Filipino.”

What makes Bebang’s writing so potent is the razor-sharp truth as well as its perfectly timed punch lines. It’s the Filipino laughing and thinking at the same time, much like the writer.  “We Filipinos cope in a very unique manner,” Bebang Siy says. “That’s what is funny. It’s also what makes us strong.”