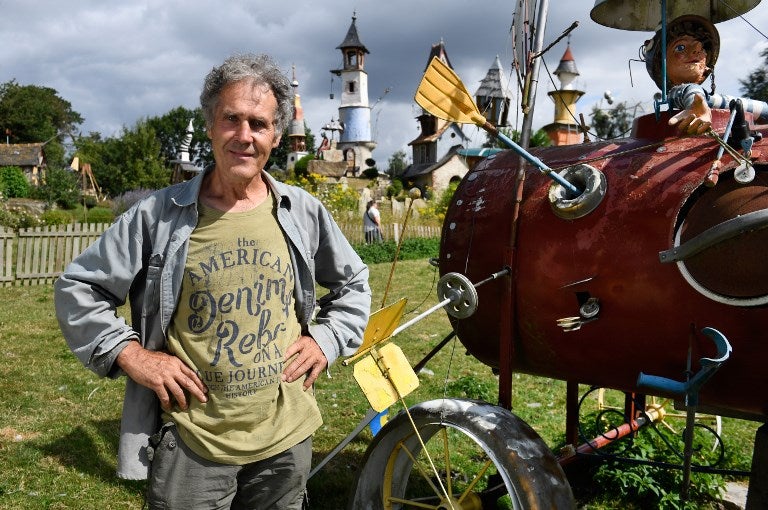 Founder Robert Coudray poses on the site of "Universe of the scrap merchant's poet", made of iron-made sculptures on July 17, 2018 in Lizio, western France / AFP PHOTO / Fred TANNEAU

With its fairytale towers, quirky animated sculptures, fantastical constructions and musical fountains, the inventive world crafted out of discarded junk by the man known as the “Scrap Metal Poet” is tucked away deep in the northwestern French countryside.

“It’s an extraordinary place in my imagination,” says its creator Robert Coudray, who has let his imagination run wild for nearly three decades, turning his ideas into reality.

Now to the sounds of chiming bells and flowing water, visitors can wander around his little timeless world of scrap creations, peeking inside some of the 15 towers and admiring some 70 figures that move, laid out over a hectare (2.5 acres) of land in the village of Lizio.

Coudray, 65, said it all began out of boredom.

“One day, I was bored so I started to make cabins, little cabins… and since I was bored, I made them bent,” says the sculptor, whose previous jobs ranged from stonemason to farmer.

Next, he began creating sculptures and fountains that move and come alive. To build them he scours junkyards for his main materials, scrap metal and wood, and lets his imagination soar in his workshop.

“I love everything which is not normal, everything that is quirky,” he says. And each year his world grows, for he says he’s not done yet. “I have a vision of where I want to go and that’s going to take another 15 to 20 years.”

Though located off the usual tourist route in Brittany, Coudray attracts around 35,000 visitors every year, both youngsters and those young at heart.

As one visitor put it: “It’s enchanting, it’s as if we rediscover the spirit of childhood through all he has done.” MKH

Ruling from your home: Inside Australia’s micronations boom