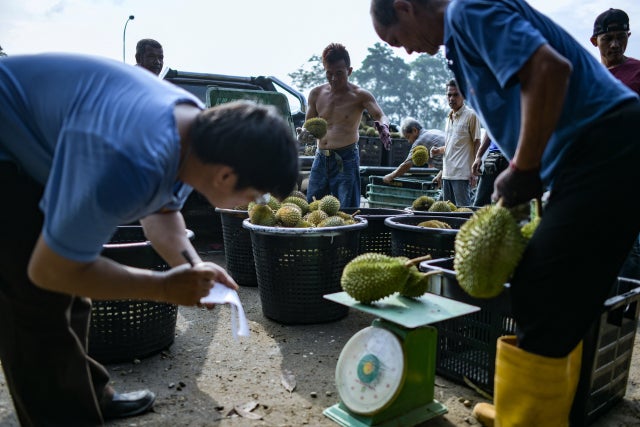 Workers divide and weigh durians at a farm in Karak, outside Kuala Lumpur in the nearby Pahang state. Image: Mohd Rasfan / AFP

Malaysians are dashing to durian stalls across the country to munch on the pungent, spiky fruit after a long spell of unusually warm weather led to a bumper crop and sent prices tumbling.

The fruit is highly divisive, with detractors describing it as smelling of gym socks and onions while enthusiasts liken its creamy texture and intense aroma to blue cheese.

People head to street-side stalls during the durian harvest every year in parts of Southeast Asia to munch on the thorny delicacy, with prices for the most sought-after varieties soaring in recent times.

But this year a combination of unusually hot weather and heavy rainfall resulted in a long durian season, and produced an oversupply that has pushed down prices and prompted fans of the fruit to come out in even greater numbers.

Pictures circulating on social media in recent days have shown durians selling for as little as one ringgit (about P13) in the northern state of Kedah.

“I think all Malaysians are seizing the opportunity to eat durians this year as high prices last year kept many away,” Jake Wong, 38, told AFP at a large stall on the outskirts of Kuala Lumpur, where about 100 customers were enjoying the fruit.

“Now I am eating durians almost twice a week.”

He said his favourite variety was the popular Musang King, whose price has fallen from 100 ringgit (around P320) a kilo last year to 50 ringgit now.

“There was a bumper durian harvest at the start of July due to the hot weather,” Cheah said, adding that when prices hit their lowest point earlier this month, he was selling thousands of durians a day.

Prices have also plummeted in neighboring Singapore, which gets its durians from Malaysia, prompting some vendors to give away the fruit for free, the Straits Times newspaper reported. AB