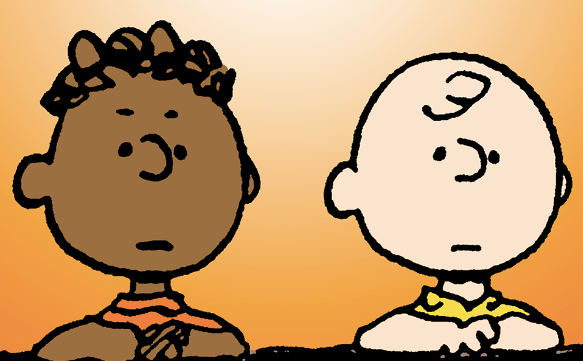 Franklin, the first African-American to appear in the classic comic strip “Peanuts” alongside Charlie Brown and Snoopy, turns 50 on Tuesday — a major milestone for a character born in a time of racial tensions after the slaying of Martin Luther King.

The young Franklin joined the iconic line-up on July 31, 1968 during a summer of race riots and civil unrest in the wake of King’s assassination on April 4 that year.

At the time, “Peanuts” was carried in hundreds of newspapers — and at the height of its popularity, exposing the foibles of humanity through the shenanigans of a group of children and one crafty beagle.

Franklin’s arrival made a major splash — and earned mainly praise. It also might not have happened were it not for a Los Angeles teacher and mother-of-three with an idea.

On April 15, Harriet Glickman wrote to “Peanuts” creator Charles Schulz and suggested he include a “Negro” character into the comic strip, which had been running since 1950.

“Since the death of Martin Luther King, I’ve been asking myself what I can do to help change those conditions in our society which led to the assassination and which contribute to the vast sea of misunderstanding, fear, hate and violence,” she wrote.

“I’m sure one doesn’t make radical changes in so important an institution without a lot of shock waves from syndicates, clients, etc. You have, however, a stature and reputation which can withstand a great deal,” she added.

The letter now hangs in the Charles M. Schulz Museum in California.

Several days later, Schulz wrote back that he would like to do so, “but I am faced with the same problem that other cartoonists are … We would all like very much to be able to do this, but each of us is afraid it would look like we are patronizing our Negro friends.”

“I don’t know what the solution is,” he said at the end of the brief letter.

‘My Dad is over in Vietnam’

Undeterred, Glickman wrote back with an offer to run the idea past some of her black friends, all of them fans of Peanuts, to see if they found it reductive.

She told Schulz of their approval, but he still appeared to be unconvinced.

Then, at the beginning of July 1968, he again wrote to Glickman, telling her to keep an eye on the comic strip in the week starting July 29.

In the July 31 edition, Charlie Brown loses his ball at the beach: it is returned by an African-American boy.

Franklin had made it onto the page and bonded with Charlie Brown over sand castles and baseball.

“Is your whole family here at the beach, Franklin?” Charlie Brown asked his new pal.

“No, my Dad is over in Vietnam,” Franklin responded.

The response from readers and newspaper editors was largely positive, Schulz later recalled, although he did receive at least one complaint from an editor in the South about the white Charlie Brown going to the same school as the black Franklin.

Two years earlier, Marvel had created its own first black superhero, Black Panther, created by the masters of the genre, Stan Lee and Jack Kirby.

But Franklin proved a novelty in the mainstream comic strips world, whose audience was mainly white and middle class, even if some black readers saw him at times as a little bland in the cast of quirky characters. MKH