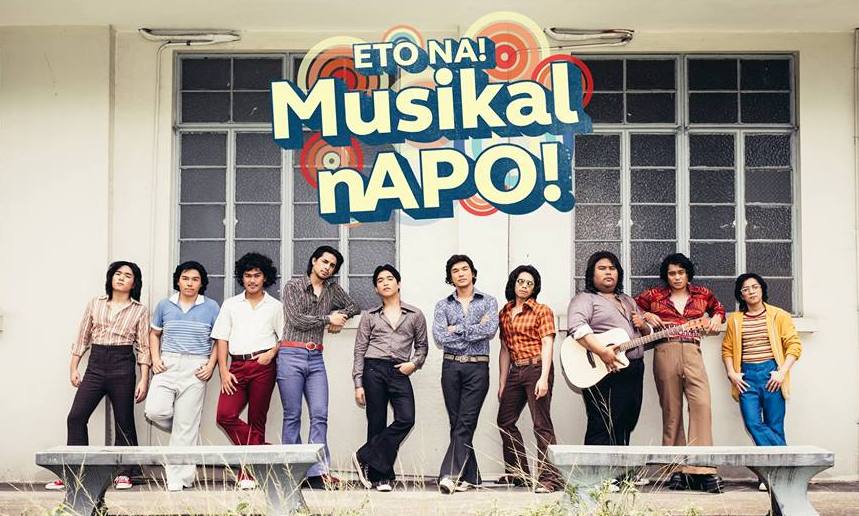 That is the key, Jim Paredes said, to how the cast of 9 Works Theatrical’s “Eto Na! Musikal nAPO!”—a new original Filipino musical built on the songs of the Apo Hiking Society—would connect with the audience.

“Take it where you want to go. Sing it the way I did, but do your own interpretation. Surprise and delight,” added Paredes, who, along with Danny Javier and Boboy Garovillo, formed the Apo Hiking Society in college at Ateneo de Manila.

Of 200 songs that Apo had recorded, about 60 are now classics.

The creative team behind “Eto Na! Musikal nAPO!” regularly consulted with Paredes, Javier and Garovillo in creating the musical, the rough draft of which, said Guevara, had been in his head for years. But it materialized only in 2013, on the set of “Grease,” 9 Works’ musical production then, when Garovillo mentioned the idea while chatting with Guevara.

“It’s about time. They were sincere and serious, so all of us said yes,” said Paredes.

Guevara, dramaturg Jonjon Martin and musical director Daniel Bartolome have woven over 20 of the trio’s compositions into a narrative set in 1975. Whenever stuck, they asked Apo members for suggestions on which songs would best fit specific scenes.

The musical is a romantic comedy on teenagers dealing with challenges amid homework and home issues. But since it’s set in the ’70s, martial law—which Javier described as an “unignorable circumstance at that time”—figures in the story. Guevara did not want an overt political play since “martial law is a touchy, personal subject,” but “you cannot be in Manila then and not know about it,” he said. It will still be in the show, affecting the lives of the main characters somehow.

The choreography is by PJ Rebullida, who did acclaimed work on the Disney musical “Newsies,” which 9 Works and co-producer Globe Live staged last year. Globe Live is also co-producing “Eto Na! Musikal nAPO!”

These songs have been “theatricalized” to fit into the narrative, Guevara said, though some romantic songs have retained their original flavor—“When I Met You,” for instance, and “Panalangin,” which Paredes described as “the No. 1 wedding song.”

Would the Apo do a cameo?

“This being theater, you never know,” Paredes said.