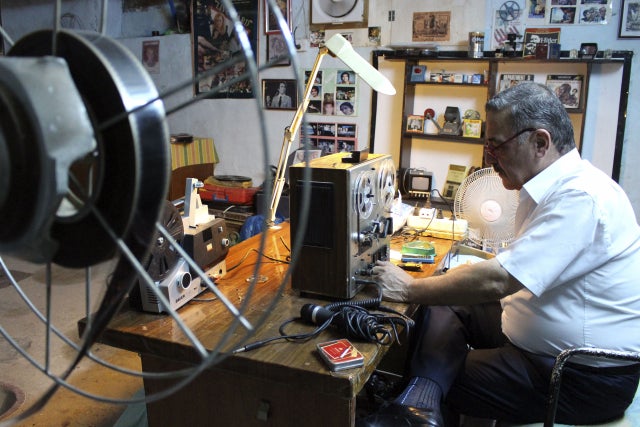 Abdel Qader al-Ayoubi in his basement in Iraq's northern multi-ethnic city of Kirkuk. Action and horror flicks are a hit at Ayoubi's cinema but his personal favourites are the Arabic movies, the musical comedies of the 1950s and 1960s, or the good old-fas © SHWAN NAWZAD / AFP

Art of cinema comes alive in basement of Iraq aficionado

From black-and-white musicals to action movies, Abdel Qader al-Ayoubi screens films and exhibits paraphernalia of the art form in his basement in the Iraqi city of Kirkuk, a cinema-free zone.

Back in the 1970s, the city of Kirkuk was home to five cinemas: the Khayyam, Hamra, Alamein, Atlas and the Salaheddin, the educational advisor and longtime movie enthusiast told AFP.

The silver screen pulled in audiences in towns across Iraq, until 1980 when war broke out with Iran, marking the start of decades of conflict.

It was only in December that Baghdad declared victory after a three-year battle against the Islamic State group.

While the level of violence has declined sharply, the rich cultural life long associated with Iraq has struggled to make a return.

More than a decade of sanctions following Saddam Hussein’s 1990 invasion of Kuwait, as well as long periods of militia and jihadist dominance after the 2003 US-led invasion that toppled the dictator, have ensured an end to the golden age of cinema in Iraq.

The cinema experience in the country is now restricted to multi-screen theaters in shopping malls of Baghdad and the main southern city of Basra.

In oil-rich Kirkuk, which is home to Kurdish, Arab and Turkmen communities, “all the movie theaters have closed, for different reasons but mainly because of security concerns”, said 59-year-old Ayoubi.

Only in the basement of his home can a Kirkuk cinemagoer experience the whirring of the film reel and the purring of the projector’s fan.

Ghassan Hawwa, an oil sector worker who remembers the days of the Atlas and Hamra cinemas, is a regular in the audience on leatherette seats at the weekly rendezvous in the basement.

“Today, everybody watches DVDs or goes on the internet,” sighed Hawwa, who along with a cluster of co-enthusiasts aim to bring cinema back to life in Kirkuk.

Action and horror flicks are a hit at Ayoubi’s cinema but his personal favorites are the Arabic movies, the musical comedies of the 1950s and 1960s, or the good old-fashioned love stories.

Foreign films are also on the program, such as the Spaghetti Westerns whose posters plaster the walls of his small museum that is open to the public on weekends and public holidays.

Ayoubi guides visitors around his museum, giving the history of the reels, projectors and other cinema paraphernalia to a new generation “who know nothing of the cinema world of old”. NVG

Stick it like Gianni: Italian scores with football album collection