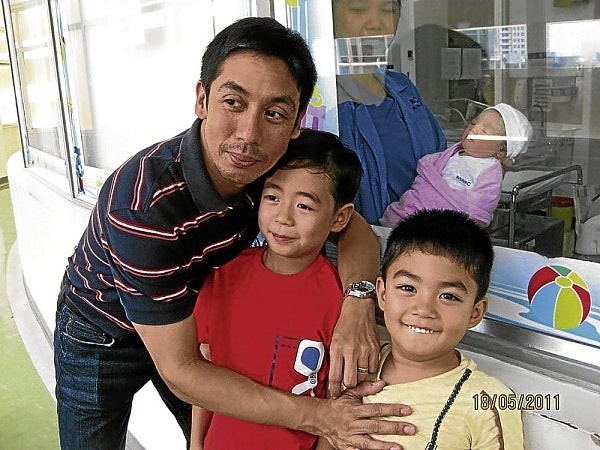 In June of 2011, while our family was (fortunately) gathered in one place (in Bacolod), we took pictures for use in our usual photo card to be sent out in December.

In November, I started to write our 2011 Christmas newsletter with the intention of snail-mailing the cards and the letter before the year ended. It is a curious practice (in this age of rapid communication via the Internet) I am not quite ready to give up, because “one day” I just might find the energy and enough conceit to compile all the hard copies of the letters I have written year after year chronicling significant events in each year, to have the whole lot bound to give the grandchildren as souvenir of a life well spent.

The 2011 letter began with the story of how sad the year started, with news of the illness of Nora, the yaya of Pablo (our eight-year-old grandson), and how we grieved her passing in April.

While news (from here and abroad) of tsunami, nuclear disaster, earthquakes, floods, wars, famine, diseases, financial meltdown, Senate hearings, corruption, destruction of the beauty God created, and senseless killings brought more grief, fears, tears and anger, I knew I was not going to write a single line about any of those, since instead of sadness, I had a joyful story to tell.

Our Christmas letter was going to be all about Santana Lucia, who came to our life on the wings of a beautiful love story between our daughter Jennie and her beloved husband Javy.

Santana is all sunshine on a gloomy day.  Now at seven months, she can study your face and break into a big smile when she sees that you enjoy her company. Her giggle is infectious.

Both Javy and Jennie knew they were blessed to have two amazing sons and then a precious daughter. They were determined to keep these blessings sacred and protected from harm, maybe the same way we protected our daughters from the day we knew we were going to have them.

When I carried our daughters, I didn’t take pain killers for headaches. I tried to eat healthy, stayed away from smokers. Juan Miguel and I prayed hard that no harm would visit them. We tried to protect them from mosquito bites and scrapes and made sure they got the proper vaccines for every known disease.

When they started noticing boys, we worried about heartaches. I cried each time one or the other daughter’s heart was broken by some stupid and faithless boyfriend.  In order to help them through some hard times, I tried to make them understand that those worthless heartaches can make them stronger in meeting bigger ones. I wasn’t really sure what “bigger ones” were, but only had an idea that it could be a bad marriage.

When Jennie fell in love with Javy, we prayed for the love to be real and mutual.  When they got married, we prayed that the marriage would endure and be blessed with children.

We thanked God for answering our prayers. Jennie could not have found a more loving, thoughtful, tender and hardworking husband than Javy.

We rejoiced when they had their first child—Pablo, who has his father’s looks and keen mind. Three years later, Agustin (Gus) came. Gus inherited his father’s caring and gentle heart. On May 18, 2011, Santana was born, and all together they created an ideal family, totally shielded from heartaches by the sheer power of their love for each other. What mother could ask more for her daughter?

Jennie and the children arrived from Bacolod on the 19th of December, ahead of Javy, who had to finish up some farm work. He was supposed to arrive on the 23rd to help Jennie do some last-minute shopping.

On Tuesday, the 20th of December, our world was thrown off course when Jennie received a call from Javy’s brother that Javy had “fainted.”

Javy was with seven others who rode five ATVs and three motorcycles from Bacolod to Kabankalan. Somewhere during the trip, Javy expressed that he was getting tired after he tried to free his motorbike from being lodged in the mud. He “fainted” and was brought to the nearest hospital onboard one of the ATVs.

After maybe an hour of waiting for definitive news on Javy’s condition, Jennie received the devastating report that Javy could not be revived. (Possible cause: dehydration, and not heart attack).

It suddenly occurred to me that with all the caution against hurt I had given Jennie, I failed to include preparedness for the loss of a loved one which could break her heart in thousands of painful little pieces. Who would have thought that Jennie could lose Javy and be a sorrowful widow at 33, left with three children without their father to laugh and play and be foolish with?

The testimony delivered by two of Javy’s closest friends, Carlo Cruz and Carl Cariño, validated our appreciation of the beauty of Javy’s soul, now forever in God’s embrace.

I know Javy’s own parents (Giging and Richie), brothers Coco and Cardo, and sister Tata are in deep grief over the loss of a beloved son, a dear brother.  But I must tell you: Juan Miguel and I have been shedding as much tears.

Thank God for the constant presence of three of Jennie’s dearest friends, Marivic, Teray (both immediately flew in from San Francisco to be with Jennie), and Dani, and the indefatigable support of our rock and comfort, dear sweet Monica, who flew to Bacolod with Giging to bring Javy to Manila. The days moved on without Juan Miguel and me falling apart with grief.

Now it’s time to thank you for your presence, your expressions of sympathy and your prayers which gave us comfort during our time of sorrow.

May God bless you all.

In loving memory of