Mother gave up job, went to class with autistic son to help him get into university | Lifestyle.INQ ❮ ❯ 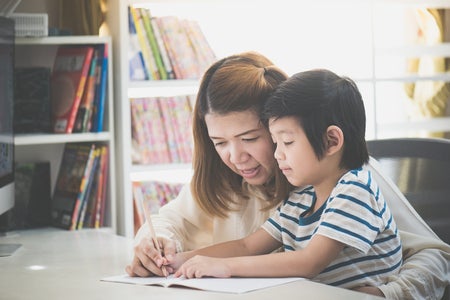 Mother gave up job, went to class with autistic son to help him get into university

One mother in China gave up her job as a physics teacher about 10 years ago for the sake of her son.

Pang Zhihua from southwest China was the ever-devoted mother when she did away with her career so she can help her son, Bao Han, with his studies.

Today, Bao is set to begin his first semester at the Nanjing Normal University of Special Education this September. According to West China City News via The South China Morning Post last August 6, Bao will be majoring in computer science.

According to Pang, Bao was diagnosed with autism when he was three. Due to his condition, it became difficult for him to socialize with his classmates in kindergarten.

“The other kids would be running around together in the playground, but my son was always by himself near the wall,” Pang was quoted as saying. “Some of the others would chase him and call him ‘stupid.’”

Pang decided to do something about it and quit her middle school job as a physics teacher to apply to primary school in the hopes of being able to work in Bao’s class. Unfortunately, there weren’t any teaching positions available for her. Pang instead took the job as a maintenance worker in the school, where she played with her Bao during his breaks.

When Bao started to have more trouble with his classes, Pang asked the school administration if she can sit with him in class so she can take notes and go over the lessons with him after. Their joint effort as mother and son worked as ten years later, Bao is now set to enter university.

“When he was preparing for the [entrance] exams, my son studied so hard – he’d wake up at 6:30 in the morning every day,” Pang said in the report. “He spent most of his time going over his English vocabulary, revising and doing mock exams.”

But as Bao starts university this September, he also has to face the next challenge that awaits him: being on his own.

Pang, now old, shared that she can’t join Bao in his classes anymore. Instead, she and her husband
will be moving close to Bao’s university in Nanjing so they can still see him. He, however, will be alone in his studies.

“I’m old and I won’t be able to answer many questions about his major,” she said. “But I want to be close by – if something happens, we’re there.”Cody Cepeda/NVG