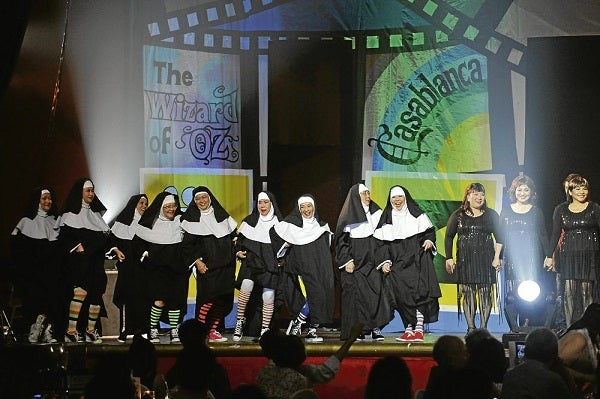 Here are my “OMG” moments of 2011. They’re not earthshaking. They neither changed the lifestyle scene (we ran the Top 12 Lifestyle stories of 2011 last December 30) nor were talked about, but I’ll nonetheless remember 2011 for them, culled from my lunches, dinners or casual encounters.

Collagen contagion. Like we said, 2011 was the year of “collagen/filler contagion” in Manila, sweeping both women and men. At a formal event, a woman— whose chin, cheekbones, and perhaps the rest of her facial map have been puffed up and mishapened Picasso-style— walked up to me, in a serious attempt to convince me to have the “fillers” myself. “C’mon,” she said, propping her face with her hands, “don’t you want to look like me?”

Killer heels. It was excruciating watching a matron land on her behind on the runway, then struggle to get back on her feet, in full view of an audience that could only let out a collective gasp. She was in those killer heels as she paraded a long serpentina dress on the ramp. Why couldn’t a year go by without a woman stumbling while on those torture instruments that passed off as shoes? Even models tumbled one after the other on the ramp two years ago (they were quicker back on their feet, though).

“Can’t I watch a show without having to cover my eyes?” a guy said, who couldn’t stand the sight of girls slipping all over.

Women risk serious injury wearing those stratospheric heels, round the clock. Five or seven inches high or more is sheer orthopedic torture, at whatever age or fashion trend. Chiropractors and orthopedic doctors have not been remiss in sounding the alarm that such foot contraptions could result in spine injury, apart from ankle, foot, leg injury.

Apparently more and more women are becoming aware of the risk, or are reeling from the sheer discomfort of wearing high platforms. I notice more and more girls are in ballet flats, or are slipping into ballet flats after wearing those high-rises for hours. There are chic foldable ballet flats now in mall stores—like Butterfly Twists that originated in Notting Hill in the UK, Footzyfolds  or Yosi Samra—which you can store in your bag then wear when you feel your feet giving way. There are even folding flip-flops (Flipsters).

No woman’s bag today should be without these folding flats in it.

In 2011, women planted their feet on the ground again—literally—simply because their feet hurt.

Not Midas. “No, he’s not!” Dr. Teyet Pascual, at a recent dinner, dismissed the rumor that his favorite nephew, Supreme Court spokesperson Midas Marquez, could be gay. The naughty speculation came about after a news footage ran on YouTube showing Midas behind a bank of mics at a presscon and making a rather effete gesture after a mic accidentally fell. The tyranny of the Internet.

“That’s not true at all,” Teyet said, laughing, when we asked him about the talk triggered by the video. Who’d know better than an uncle, right? Other than the wife, of course.

We remember Midas’ wedding more than a decade ago, the most stylish that time. Its church and hotel décor was arranged by Teyet—a milestone style statement that set the trend for weddings all over the country. Its use of antique tall candelabras on reception tables, precious Philippine artwork and gold Tiffany chairs blazed the trail for Philippine wedding style. After that, everybody was using Tiffany chairs, tall candelabras and Philippine artworks at weddings.

The ugly talk comes with the territory, when you’re on camera (almost daily) and that good looking. Midas is to lust for by girls—and gays.

Streetchildren at ATM. The year ended, but the sight of streetchildren didn’t go with it. They’re still everywhere. A BPI ATM in BF Parañaque seems to be a favorite of streetchildren and vagrants—they’re there, day and night. One morning, in this ATM drive-through, a girl, a tween, shoved her rug merchandise into my car window—four or five for a hundred bucks. As I was about to buy, she told me she had a school project and she needed P150, so could I give her that instead. When I said “no,” she snapped, “’Di ko kailangan pera mo!,” threw me a sharp look, then grumbling, retreated to her corner by the ATM. I wanted to tell her, hey, I work hard for this money, and you should, too, with your rug merchandise.

This makes you wonder about the culture of mendicancy gripping marginalized Filipino children—their first motor skill is to extend their palm to beg. It’s the feeling that the world owes them, even before they learn that money is earned, not doled out.

There’s hardly any institution today, not even DSWD, that’s strongly focused on streetchildren.

Only in the Philippines. Not country bashing, for a change. In Boracay last month, a friend was bitten by a jellyfish, in the leg, as he swam far into the sea. The feeling of numbness was going up from his leg to the thigh and he was in serious pain, so we had to seek help at the Pearl of the Pacific. After pouring vinegar on the sting, hotel staffer Cesar Ledesma said we must rush our friend to the emergency clinic. So we all hopped into the tricycle with Ledesma.

Once we got to the clinic, we realized that in our rush, not one of us brought our wallet, so Cesar offered to pay the fare. In the Boracay Emergency Clinic the doctor prescribed some medicines, but since we didn’t have the money, the clinic offered to advance the money for the medicines, which Cesar again offered to buy in the drugstore in the mall.

In short, we got by that day through the hospitality, generosity (of course, we paid everything back) and solicitousness of the hotel and clinic staffs—typical Filipinos who are naturally kind to strangers and people in need.

People ever ready to smile even amid unfortunate conditions, people  going out of their way to be kind and gracious  to strangers, people forking out their own money during emergency—only in the Philippines.

Watch that stretch tulle. I remember what Mark Higgins—the artist heir of Salvacion Lim Higgins of Slims—said while sitting in as judge in the 2011 Look of Style Awards, scrutinizing the work of the young fashion designer candidates. “Did you use stretch tulle here?” he asked the contestant, pointing at the waist.

Later, he said of many of today’s young designers, “They resort to using stretch tulle. They take the short cut to correct clothes construction.”

Apparently, instead of mastering the craft of pattern making, cutting, fitting and all that, these kids use stretch fabric, particularly at the waist and bodice—fits all, in other words.

Fortunately, none of the Look of Style Awards participants did, and Mark finished the judging with his face beaming.

Mark is one of Salvacion’s two children. The other is Sandy, a  director of a Hong Kong advertising agency. Since the two took over the reins of the 50-year-old Slim’s School of Fashion after their mother’s death and the incapacity of their aunt, they haven’t stopped promoting the high standards in fashion education which was their mother’s legacy.

Last year, they staged the milestone-setting fashion show of Slim’s notable alumni, from the likes of Joe Salazar, Cesar Gaupo and Chito Vijandre to the recent graduates such as Ezra Santos. That was a standout show of 2011.

Watch those red panties. At a post-New Year dinner, we had a gas listening to a woman executive recall her stint in an old casino. Speaking of feng shui, she said that a feng-shui master was able to convince the casino owner of a formula to bring good luck to the casino—make all the female staff in the casino floor wear red panties. And—to make sure that was strictly followed, a female manager would do a morning inspection daily. Our manager friend was spared from wearing red underwear because she didn’t work on the floor.

We don’t know if any of today’s breed of casino owners follows the red underwear formula. Wait until the Chinese New Year.

Korina at 8:30 am. Imagine yourself just done with an early breakfast and you’re going back up to your hotel room, stomach full but mind still half asleep. The lift’s door opens and right before you is Korina Sanchez, looking so fresh, beautifully made-up, her hair a glamorous bounce of waves. In the morning, even before a cup of coffee? How on earth does she do that?

That was exactly what happened to us one morning last month, in winter, in Zurich, when we did the “Mamma Mia” tour with Korina. How does she do it—that nice wave of a hairstyle that has become her trademark on TV—we asked her; in our case, holding a blow-dryer before noon is akin to an act of martyrdom. “Instant heat hair-setters. You’re done in minutes,” she told us about this must-have contraption for women with long hair and who are always on the go.

In a season when long wavy hair remains the trend, we will try this out. But apart from that contraption, Korina must have that inexhaustible energy to be able to chase the story—whatever story could be had in Zurich—from morning until dinnertime, doing one interview after another, while we were content just watching the evening performance of “Mamma Mia,” which, by the way, opens in Manila on Jan. 24 at the CCP.  The whole international tour cast and a plane-load of sets and theater infrastructure will be flying in, in this venture of LunchBox with Concertus.

Only in Cebu. After Zurich, last month we flew to Cebu even before we could catch our breath. We knew it would be worth it—just to watch Cebu’s movers and shakers perform Broadway hits in the much-awaited fund-raiser of the Arts Council of Cebu. They do it about every two years. The ACC officials, led by president Petite Garcia, Margot Osmeña, Jaime Chua, and our friends Marissa Fernan, Elvira Luym, Teresin Mendezona, and friends of friends rehearse for months, fuss over their costumes, and brave stage jitters just to mount the performance at Waterfront Hotel.

Their numbers covered the whole lot—from “My Fair Lady,” a number reserved for style maven Teresin Mendezona, to “Mamma Mia.” As one of them said, it’s the best way to raise funds—“Your friends and family pay to watch you, your enemies also pay to watch you.”