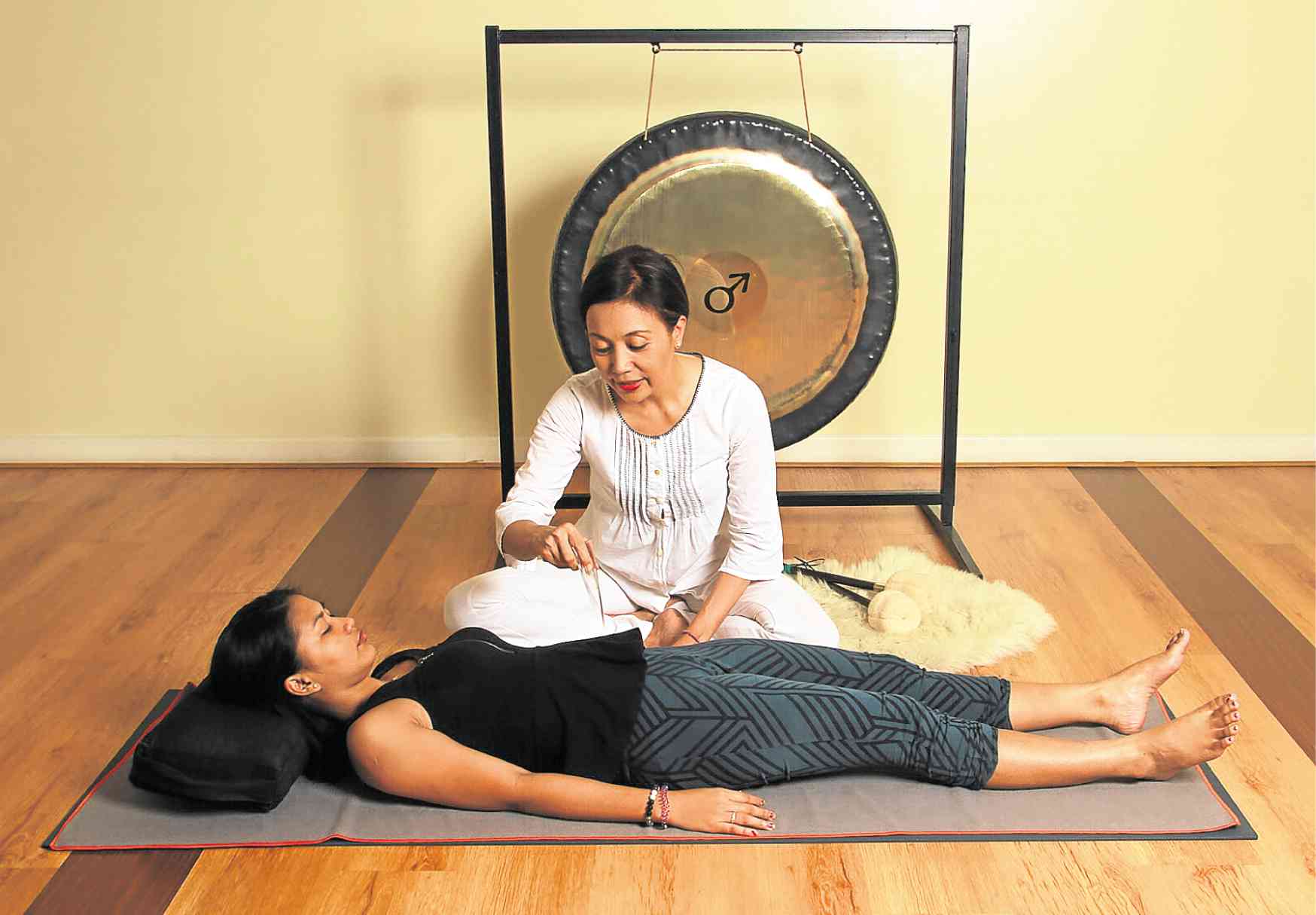 Cruz complements the gong therapy with other modalities such as the Flame of Genesis, a healing crystal that focuses on the client's weak energies. -NELSON MATAWARAN

A doctor had been diagnosed of breast cancer when she consulted Rosanna “Rosan” Cruz. Cruz calls herself an “urban energy healer” who works on people suffering from the pressures of urban living by combining various alternative modalities to restore their energy.

Cruz used “theta” (relaxed) healing, a method that addresses limiting self-beliefs while the client’s brain waves are on theta level or a deeply relaxed mode.

As the first gong master in the Philippines, she alternates treatment with gong therapy or healing with sounds and vibrations.

Cruz also uses the gong healing when clearing space. in one office, she detected an area where the energy was heavy. It was the space where intrigues brewed.

She took a cluster of dried sage and lit the end. The sage’s properties not only killed the bacteria but also expelled the negative energies. She then used the gong, claiming the sounds helped people release negative energies. In time, the boss let go of undesirable employees.

Gong healing or gong bath is new in the Philippines, but is very popular in the West. As a gong healer, Cruz works with several gongs.

Instinctively, she increases the intensity and the rhythm of the gong using various fur-covered mallets to produce different effects. Louder and faster sounds relieve the nervous system of ailments and anxieties.

It is never struck in the center, the most sensitive part.

The gong sounds soothe the parasympathetic nervous system which controls sleep and the digestive system.

Every week, Cruz holds an hour-long gong bath for groups in a Makati studio, and a monthly gong bath at Yoga Express.

She explains that the gong’s sounds enable the brain waves to slow down from delta state or deep sleep to theta state which stimulates regeneration. She observes that as people’s bodies harmonize with the sound waves, they experience relaxation, a half-trance state or powerful meditation.

The effect varies with each individual.

“Some will fall asleep. Others will feel pain in their body. It’s nothing to be afraid of because the sound penetrates that problem area. After the gong bath, the pain will disappear.
Some people feel like they’ve gone out of space.

“A regular participant from Bulacan said she saw a silver light penetrating her Third Eye. The theta state promotes repair of tissues and healing of emotional, physical and spiritual issues,” Cruz says.

The gong bathers wake up feeling energized. The effects last a few days.

The session begins with pranayama or yoga breathing exercises with coordinated mudras or hand poses to seal the energies, followed by 40 minutes of gong meditation.

She also includes BioGenesis, a system that restores the mind-body balance. Cruz waves a crystal glass tool in circular or pendulum-like motions over the client. The energy neutralizes the physical or emotional issues.

“If you are influenced by negative energy, I put it around you. With cancer patients, I focus on concerned areas,” she says.

“They don’t collapse after the chemo. One client can walk on the treadmill. Another feels happier as if she’s not facing the Big C,” Cruz says.

“Patients should consider theta and sound healing to complement their therapies. Conventional medicine addresses only the physical or the symptoms, but the root causes are emotional.”

For others who are uncomfortable looking into the past, Cruz uses emotional release therapy with essential oils in combination with the gong healing. They are massaged on specific points of the body to help weaken the negative forces.

Before she became a healer, Cruz held a demanding job as a corporate communications executive. It was stressful, which she believed led to cervical slipped disc and temporomandibular joint (TMJ) disorder.

In pursuit of healing, Cruz studied several schools of yoga and is a certified instructor of kundalini, a yoga which stimulates the stagnant energy flows on the organs along the spine.

She trained in the United States for theta healing under founder Vianna Sibal, and studied gong healing under Don Conreaux, Mehtab Benton and Martha Collard.

Cruz says of her experience: “As I am playing, I am healing myself. The playing is intuitive. I pick up what is necessary for you. I chant a mantra so I can focus on the client. When I’m doing a gong bath, I also pick up whatever the people need. It’s important that I am ego-less and that there are no other thoughts that enter my mind except to heal.” –CONTRIBUTED