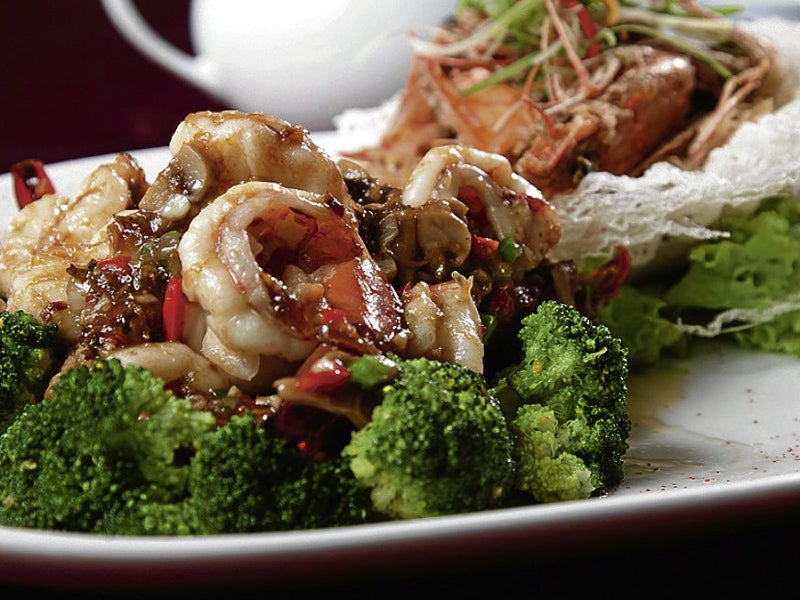 It’s the year of the Water Dragon, and there’s no better way to welcome the auspicious year than being at Mandarin Oriental, Manila, for its fabulous food celebration.

The hotel is never more colorful than during the Chinese New Year celebrations. The whole vicinity glows with bright lights, with dragon and lion dances winding through the streets and crowds gathering to watch the fireworks display, which this year hails the Water Dragon.

“We’ve been doing these revelries for the past 16 years,” says Charisse Chuidian, the hotel’s corporate communications manager. “We start the festivities usually on the eve (this year, Jan. 22) till the wee hours. We always try to make the celebration better than the last year. We add new dimensions in the way we present the program to live up to our guests’ expectations.”

The hotel’s yearly event has become the biggest midnight festivity outside Binondo (Chinatown) over the years. Part of the excitement is experiencing this rich Chinese tradition along with family and friends, and feasting one’s way into the new lunar year.

Hosted by Tessa Prieto-Valdes and Tim Yap for the third consecutive year, the event kicks off at 10 p.m. on Jan. 22 with lavish cocktails of Deep-Fried Crab Meat and Vegetables Spring Rolls, Golden-Fried Scallop with Wasabi-Favorite Mayonnaise and Steamed Vegetables and Seafood Buns at the MO Lounge, where a gigantic Prosperity Tree with kiat kiat or mini ponkans will accentuate the room.

Then the guests go out for a spectacular outdoor show—the grand eye-dotting ceremony led by Mandarin’s general manager Mark Bradford, highlighted by a majestic dragon and lion dance, dazzling fireworks and propitious rituals by Chau, leading to a midnight countdown.

Chau will perform a Paai-Shan ceremony and an energizing ritual to complete the hotel’s lunar extravaganza.

“This year, we’re featuring three dragons, one of them the biggest and longest (110 ft) dragon from China,” says Chico Angeles, Mandarin food and beverage director. A high point of the dragon dance is the presentation of a real fireball being chased by one of the dragons. The fireball will be held by a special guest.

Before midnight, guests will be ushered into the ballroom, stylishly decorated in black, yellow and red. A unique dinner show follows.

“This year, we’re doing more than just the traditional Chinese dance or cultural presentation,” says Angeles. “We want a very theatrical approach, more drama to excite the senses. There will be a play of lights and, at some point, you won’t get to see anything in the room but your food and what’s happening on stage.”

The room, says Angeles, will be decked with a huge flying dragon staring down at the guests. Each table will be adorned by a fireball suspended in the air.

“If you will look at the entire room, you will only see 45 fireballs amid the dragon flying in the air,” adds Angeles. “It’s new. It’s never been seen and done before.”

Mandarin lays out this elaborate celebration in collaboration with its sponsors BMW, Hennessy, China UnionPay and Enchanted Kingdom.

To the Chinese, the most important meal is Chinese New Year’s Eve dinner. Nearly every dish served, including the ingredients, has symbolic meaning, such as abundance, wealth, harmony, unity and purity. Luxurious foods, like shark’s fin or bird’s nest soup, represent rarity. Noodles symbolize longevity.

In keeping with Chinese custom, the hotel’s master chefs, including executive chef Hann Furn Chen, have prepared an eight-course prosperity dinner—the first lucky meal of the year—at the Mandarin Ballroom.

“The platter represents a bountiful harvest for the coming year,” says Chuidian. Also considered lucky are dishes that are golden or reddish in color. The cooking method of deep-frying symbolizes gold among the Chinese, and serving a golden deep-fried dish, such as Wok-Fried Shrimp, is representative of abundance in wealth for the coming year.

In the Chinese language, the words “fish” and “profit” are homophonic—they sound the same, and so eating steamed fish during New Year promises to ring in more financial success for the coming year.

For guests who want to maximize this experience, the hotel also offers Prosperity room packages with Lauriat menus. The package is offered Jan. 20-30.

For Mandarin Oriental, Manila’s Chinese New Year ticket, priced at P2,988 for adults and P1,588 for children, call 7508888. Ticket-holders will also receive a complimentary copy of the “2012 Year of the Water Dragon Forecast,” authored by Joseph Chau, which will be launched on that night.