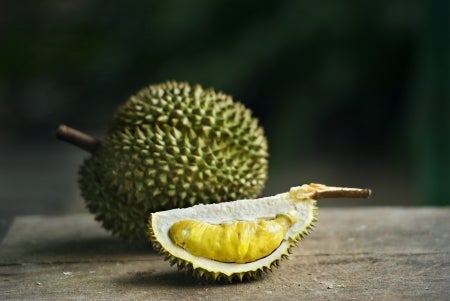 The infamous durian fruit is taking its fame overseas — Sweden, to be exact — as it was identified among the food that will be featured in the Disgusting Food Museum in Malmo. The museum challenges its goers in their concept of what they find disgusting and revolting. Disgust, after all, is a universal emotion, but when it comes to what people find disgusting, results may vary.

The exhibit, which is the first of its kind, will be running from Oct. 29 to Jan. 27 and will be showcasing 80 of the most disgusting food in the world — a treat perfect for the likes of adventure junkies, but a no-no for the less daring.

Apart from the durian, however, other curious foods have made the list, including surströmming (fermented herring from Sweden), cuy (roasted guinea pigs from Peru), casu marzu (maggot-infested cheese from Sardinia, Italy) and stinky tofu (pungent bean curd from China), among others.

Durian may not be the most loved in the fruit basket, but anyone who grew up eating the misunderstood fruit may say it’s just a matter of getting over the smell. One thing is for certain: it isn’t for everybody. It’s an acquired taste, after all, and the durian has caused many public spaces  — passenger buses, airports and planes around the world included — to warrant its banning, thanks to its savage assault to the senses.

Durian, however, can always find a home in its loyal fans’ arms. Last July, McDonald’s Singapore announced that they would be coming up with a Durian McFlurry, their own twist in their signature ice cream.

It was a move that seemed unsurprising, as durian, after all, is the national fruit of Singapore. Malaysia also issued a durian-flavored McFlurry back in 2017.

Meanwhile, Durian fans paid homage to their favorite fruit last March by staging a Durian Feast in Melbourne, Australia, a festival that coincided with the Lantern Festival which marked the first full moon of the lunar new year. The Durian festival saw fans of the fruit indulging themselves out in the open, instead of eating the stinky fruit inside the confines of their homes. JB