Zen in the kitchen: Cutting 100 slices out of a cucumber | Inquirer Lifestyle ❮ ❯ 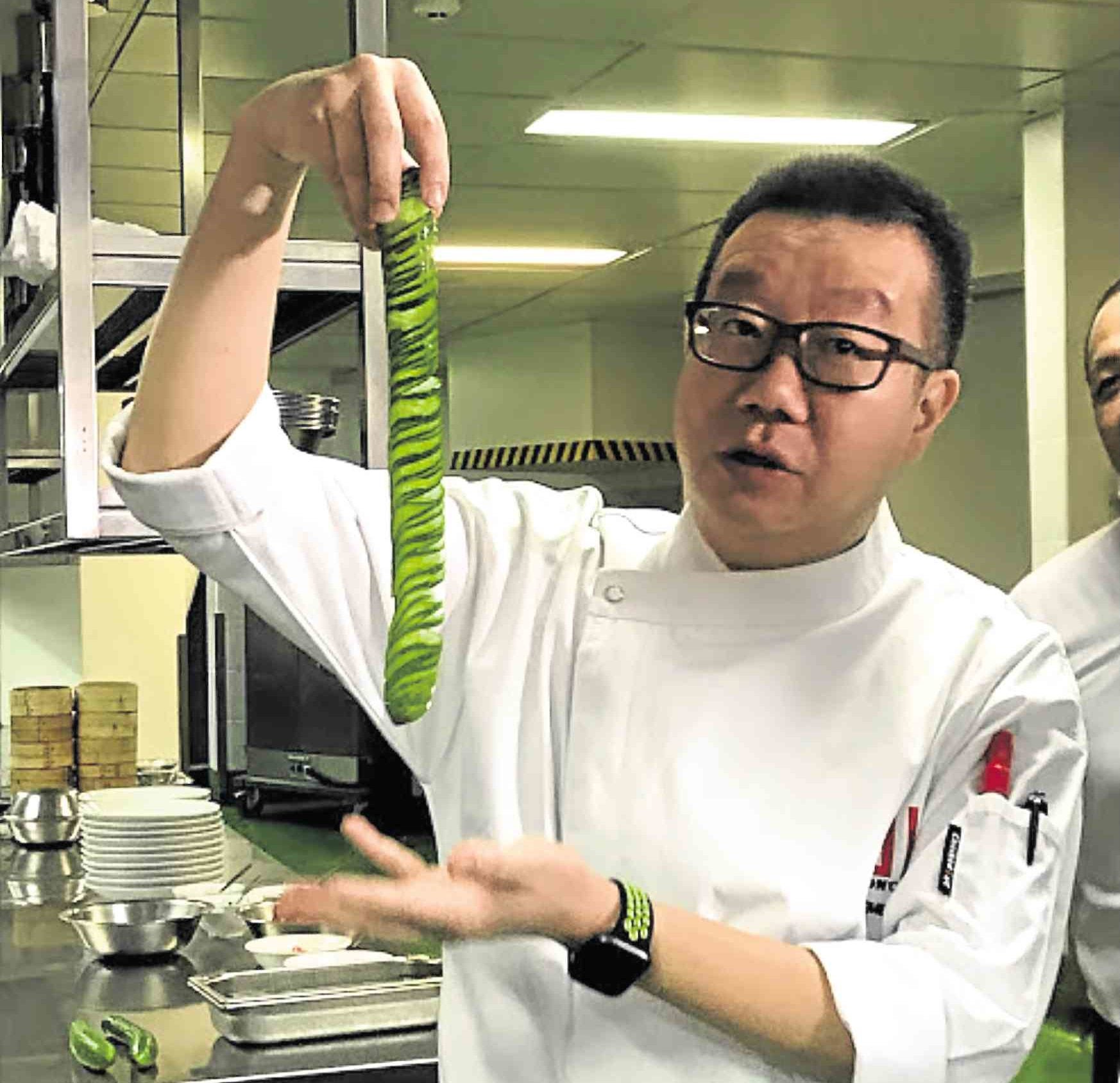 Zen in the kitchen: Cutting 100 slices out of a cucumber

It is like Zen,” chef Jereme Leung told the class of enthusiastic food writers gathered in one of the kitchens of Conrad Manila. “You must be focused and there must be silence.”

He was describing the art of turning a whole cucumber into a whirl of circles which, when held upwards, bounce like a spring. The name of the dish alone sounds Zen-like: Hundred Rings Nippon Cucumber.

How to create the hundred rings out of a single cucumber was what we had come to learn from him that morning.

Indeed, perfecting the technique requires all that, and yes, concentration and silence too, I soon learned. A few wrong moves and the cucumber could disintegrate into an unsightly mess.

In my work station, I tried to focus on cutting the cucumber into rings of equal width, careful not to cut all the way through the edge because the rings had to remain attached to one another. In other words, they had to be separate, but whole. Like a mathematical equation, the whole had to be the sum of its parts.

Luckily, Chinese executive chef Eng Yew Khor was there to encourage me—and the rest of the class as well. He saved a few of my blunders and gave me new cucumbers to work with. By the time the class was over, I managed to create a semblance of what the cucumbers should look like.

The Hundred Rings Nippon Cucumber is just one of the many dishes Leung has created for China Blue this month. It’s the starter in a set menu called Elegance of the Orient.

A showcase of Leung’s skill and artistry, the dishes employ cooking methods from various parts of China. The cucumber starter, for example, is a dish served mainly in China’s northern provinces, he said.

Even more impressive than the cucumber dish was the mushroom-shaped crispy seafood and cheese pastry. It arrived at our table with mysterious wisps of smoke swirling from underneath a dish that held stems of colorful pastries filled with shrimps. The chef said the dish was inspired by morel mushrooms, an earthy, nutty wild mushroom prized by gourmets.

The roasted suckling pig, served atop a truffle-flavored toasted bread, was a yin and yang of tender meat and crackling crisp skin.

For the soup, we had a consommé of barbecued duck, which was thick, almost gelatinous with a depth of flavor from long, patient simmering. Poised gracefully on one side were petals the color of beetroot.

The main courses included baked short rib of beef, embellished with black olive sauce and spears of asparagus. The pan-seared cod fish was somewhat deconstructed, the skin being separated from the flesh and fried to a crisp. It was enhanced by pickled ginger and an orange sauce made from puréed carrots.

Just before dessert, another main dish of barley rice with Matsusaka pork, sprinkled with wolfberries, was served.

Dessert was a refreshing light sponge dome shaped like a lady bug, made with citrusy yuzu fruit. Cubes of black currant jelly and a scoop of peach sorbet completed the meal ender.

Here, I’ve reconstructed chef Leung’s recipe for the Hundred Rings Nippon Cucumber. I was surprised to find that I could actually make it at home, and while it wasn’t perfect, it came close to this Zen-like dish.

Position one cucumber on a cutting board. With a sharp knife, slice the cucumber into circles from one end to the other horizontally, but not all the way down the bottom; leave about one centimeter on the bottom of the cucumber unsliced.

Turn the cucumber over and slice the other side of the cucumber diagonally, also from one end to the other, but likewise cutting only within one centimeter of the bottom. The cucumber should then open into rings that are connected to one another.

Repeat with the other cucumber. Immerse both cucumbers in the ice water.

Arrange the cucumbers on a serving plate, spreading them to showcase the rings. Drizzle with the prepared sauce. Sprinkle the fried garlic on top. Serve immediately.

You must serve and eat this as soon as you have poured the sauce on the cucumbers. If you let it stand too long before eating, the cucumbers will taste too salty.

Use only black vinegar, preferably aged vinegar made in China. If you use another type of vinegar, the dish will taste different. Black vinegar is sold in bottles, in the condiments section of the supermarket.

Use a sharp knife. A dull knife will make it difficult for you to slice the cucumbers properly.