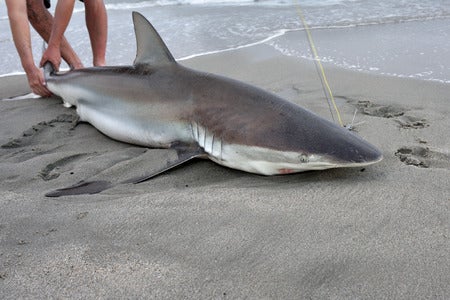 A copper or bronze whaler shark. The shark in the story is believed to be of the same shark specie. INQUIRER.net stock photo

Man gets 20 stitches after fighting off shark he accidentally headbutted

A 51-year-old man received 20 stitches in his right bicep after battling a shark he headbutted in Newcastle, Australia.

Paul Kenny was immediately rushed to the hospital after he was attacked by the shark on Saturday, Oct. 20, as reported by The Sydney Morning Herald on the same day. He got a total of 20 stitches from the ordeal.

Kenny went to the nudist Samurai Beach at 7 a.m. to swim and “catch the last wave.” However, as he was putting his head down the water, he accidentally headbutted something.

That something turned out to be a shark which immediately latched on to his right arm. The frightened man began to hit and punch the shark — which locals suspect is a bronze whaler — to get it off his bicep.

“I didn’t know it was there and couldn’t see it because it was churned up white water,” he was quoted as saying. “I didn’t know where it was and if it was going to take my legs.”

Once he was able to free himself from the shark, bystanders retrieved a bandage from his and his wife’s campsite and attended to him, before sending him to the nearest hospital.

“I was in his world,” he said in the report, explaining why he has no hard feelings toward the shark. “He was just going about his business and I headbutted him so he retaliated.” Kate Matriano/JB