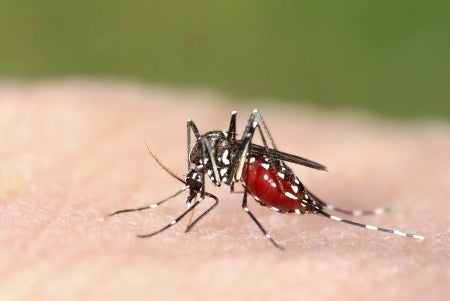 The law of karma came to fruition for a man who helped a thief steal alcohol in Campbellsport, Wisconsin, in the hands of the unexpected — mosquitos.

John Wilson, an accomplice to an alcohol thief, surrendered to authorities after he was swarmed by mosquitos while he was on the run, as reported by Fond du Lac Reporter last Wednesday, Sept. 20. Campbellsport police plan to charge Wilson with felony eluding and obstructing and operating after license revocation.

An unidentified man was stealing alcohol worth “hundreds of dollars” from supermarket chain Piggly Wiggly. The manager, familiar with the thief’s modus operandi, called the police. Police chief Thomas Dornbrook saw the suspect load a case of Skyy Vodka and a basket of unidentified alcohol bottles to a getaway car driven by Wilson.

Wilson then led the Campbellsport police on a high-speed chase, the report said. Somewhere along the line, Wilson stopped the car, got out and ran in the direction of a cornfield, away from the authorities.

He was cornered by the police. However, it was not the authorities he had to deal with primarily. A swarm of mosquitoes relentlessly attacked him.

The mosquitoes surrounding Wilson’s hiding place were so many that Dornbrook said the first thing he asked for from the Sheriff’s Department, who came to lend a hand in nabbing the suspect, was a mosquito spray. Wilson, who was in an even worse situation with the blood-sucking insects, gave himself up to the authorities roughly an hour after he hid from the police.

Dornbrook recounted that Wilson had about 15 mosquitoes on his forehead when he was arrested, the report stated. The police chief teased Wilson’s arresting officer, Fond du Lac County Sheriff’s sergeant Ryan Zitlow that the mosquitoes helped them catch Wilson.

Meanwhile, the alcohol thief also made his escape at the cornfield. While the police were unable to nab him, they know his identity and have a plan to arrest him. Once caught, he will be charged with retail theft, obstructing an officer and bail-jumping. Kate Matriano