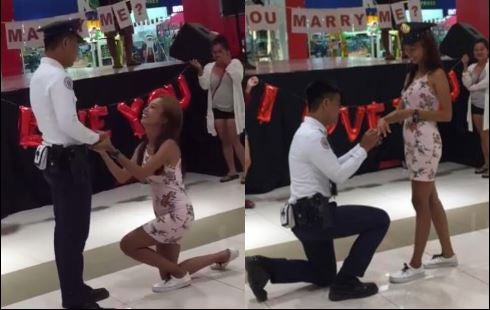 Dexter Suarez thought it was just going to be a normal day for him and his mother when they went to CityMall Tagum in Davao to catch a movie on the night of Oct. 17.

Little did they know that they would be witnesses to a sweet and heartwarming wedding proposal involving mall security guard Rengie Montes Matalang and his girlfriend, Wyndell Ybañez Aguilar, also a staff at CityMall.

Suarez took to social media last Oct. 17 where he shared scenes from the proposal, a joyous spectacle that had the power to evoke and tug on the heartstrings of the thousands of netizens who came upon it.

In Suarez’s Facebook post, he shared a video of Matalang being led to the atrium, where he was greeted with the surprise proposal by Aguilar. The words “Will you marry me?” and “I love you” were held up on and by the stage with the help of loved ones as a shocked Matalang walked towards a tearful Aguilar. Michael Bublé’s “Everything” played in the background.

After hugging each other tight, Aguilar broke away and kneeled down on the floor with a ring in her hand. As she stood, Matalang took the ring from her, gave her a kiss and kneeled to propose while spectators cheered and screamed.

Suarez shared to INQUIRER.net on Oct. 30 that the proposal happened around 8 p.m. Matalang was unaware of the entire thing.

“The girl was with her friends. The guys carrying the ‘Will You Marry Me’ sign were the guy’s friend,” Suarez said. “The proposal was very simple and sincere. The guy was caught by surprise as the girl handed to him the ring.”

As per Suarez, Matalang and Aguilar were both crying tears of joy during the touching moment. There were also other couples around who witnessed the proposal.

“They were very much thrilled for the newly-engaged couple,” Suarez added. “They were cheering for them with [delight].”

Suarez, on his end, was personally moved by the proposal and shared a thing or two of what it taught him about love: “It was a very simple yet honest way of showing that no matter how small you have, if you have the heart to love and give, that’s what matters.”

Aguilar and Matalang are set to tie the knot next year on June 8, 2019. Congratulations to the newly-engaged couple! And attagirl, Wyndell! JB