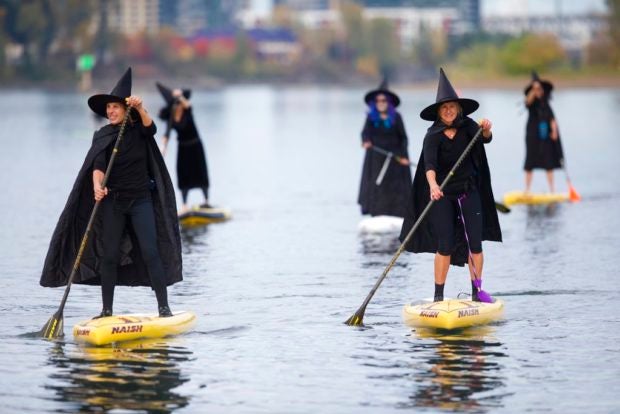 Hundreds of witches, along with a handful of warlocks and wizards, tossed their broomsticks, grabbed paddles and traveled six miles along the Willamette River Saturday, Oct. 27, 2018. The event, called Standup Paddleboard Witch Paddle, dodged days of rain catching a short window of sunshine for the entire three-hour event. The costumed coven cruised for six miles along the Willamette River, which divides the city of Portland. (Mark Graves/The Oregonian via AP)

100s of Oregon ‘witches’ paddle down river, minus the brooms

PORTLAND, Oregon — Hundreds of “witches” traded in broomsticks for paddles in Oregon during the last weekend before Halloween.

The costumed coven paddled six miles (10 kilometers) on boards Saturday along the Willamette River, which divides the city of Portland.

The Oregonian/OregonLive reported that the paddleboard event started two years ago with a handful of participants but now attracts hundreds.

Participants donated packages of socks, underwear and T-shirts to a local nonprofit group before they started paddling.

Spectators who were caught off guard by the witches watched from the shoreline. MKH

The witches stole the show in this ‘Macbeth’ mashup

The witches at the ‘Gates of Hell’: Norway’s darkest hour