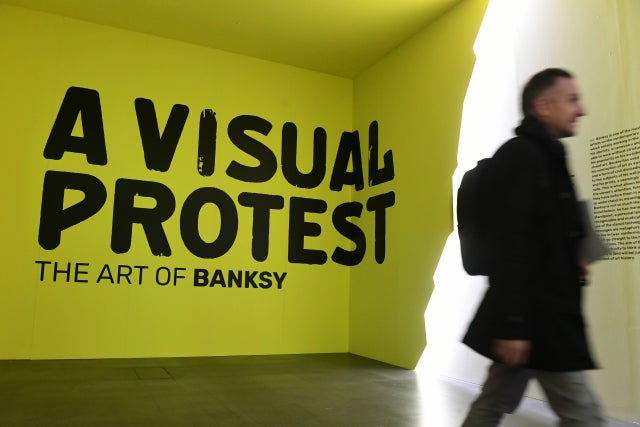 Banksy's art, at once satirical and politically engaged, denounces everything from consumerism to US imperialism or war. Image: Miguel Medina / AFP

Banksy the rebel on show in Milan

His identity is a mystery that adds to his allure, but a new exhibition in Italy dedicated to street artist Banksy looks beyond the feverish headlines to explore his works as vehicles for protest.

The solo show, organized by the Museum of Cultures in Milan, is “the first on Banksy organized by a public museum — apart from the one in Bristol put on by the artist, but that was a one-off performance,” curator Gianni Mercurio said Tuesday.

The Italian show was organized without Banksy’s say-so and was “very difficult, it was like working with a ghost,” he told AFP.

Banksy’s true identity has been a closely-guarded secret since the start of the 1990s. He is known to be British and comes from Bristol. He uploads photographs of his works onto his website, but never comments.

“Banksy owes a lot of his success, or rather to his popularity, to the fact that he is an anonymous artist. It’s a contradiction: his notoriety comes from his anonymity,” he said.

Mercurio said he opted for “a slightly academic approach” in putting together the exhibition, entitled “A Visual Protest”, which opens Wednesday and runs until April.

“I want the public to understand who Banksy is as an artist and not just as a media phenomenon. He has become a myth and that means his art has become secondary,” he said.

The show starts by looking at the artist’s influences, from the Situationism movement to the May 1968 uprising in Paris.

It explores key works such as “Love is in the Air”, a stenciled graffiti which captures a man in the act of throwing flowers instead of a Molotov cocktail in a peaceful but hard-hitting protest.

The show for the first time unites under one roof around 80 works, including paintings, sculptures and prints by the artist, as well as 60 record and CD covers he has designed.

Several works show how Banksy subverts world-famous images by changing elements in them to alter their meaning.

In “Flag”, he takes Pulitzer prize-winner Joe Rosenthal’s photograph of five Marines and a Navy corpsman raising the US flag and replaces them with young rebels from Harlem, who are raising it over a burnt-out car.

The exhibition also pays tribute to Banksy’s famous rats, who he transforms into rappers, violin players or artists.

Banksy’s art, at once satirical and politically engaged, denounces everything from consumerism to US imperialism or war.

In “Can’t beat the feelin'”, for example, Mickey Mouse and Ronald McDonald are superimposed onto the famous photograph of the naked girl fleeing napalm bombings in Vietnam, holding her hands as she runs.

“Banksy’s essence is the message. He is a storyteller and a realist because he uses elements and people from everyday life,” Mercurio said.

“He has revived the rebel and political side of street art which had been abandoned. Which is to his great credit”. AB