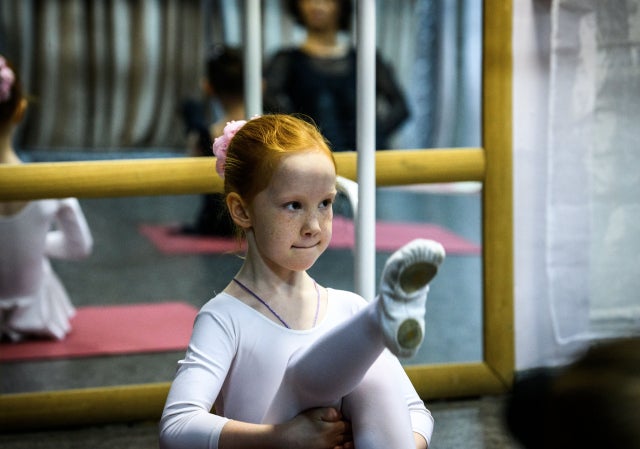 A girl attends a class at a ballet studio in Moscow. Image: Mladen ANTONOV / AFP

In a small studio in northern Moscow, girls as young as three in tutus and pointe shoes practice their ballet moves in front of a mirror.

Lined up on their mats, the youngsters have no difficulty stretching their legs up over their heads, let alone doing splits.

The studio is one of dozens in the Russian capital, home to some of the world’s best ballet troupes. Many are run by former professional ballerinas.

Children and teenagers meet at the studio in a Soviet-era community center three times a week for classical ballet classes.

They are overwhelmingly girls, their long hair tied tightly in buns high on their heads.

“We have boys, but unfortunately not many,” the studio’s director and former ballerina Oksana Mironova tells AFP. She proudly adds that one boy she taught is now a dancer at the Bolshoi Theatre.

Mironova herself started out at a ballet school in Saratov, a city on the Volga river. She went on to train at a Saint Petersburg academy, where she was taught by Russia’s legendary prima ballerina Natalia Dudinskaya.

After a 10-year career in Moscow, she suffered a knee injury that stopped her from dancing, and opened a ballet studio in 2001.

It is in these types of studios, she said, that a dancer’s “willpower and character” is forged before going on to Russia’s ballet academies, famed for their strict and rigid training.

Mironova stressed that while “you have to shout a bit” during a class, the teachers are “warm” to the children.

Russian ballet schools, she said, are considered the best in the world because of their adherence to tradition.

“We (the teachers) are all professionals from these academies and theatres and we safeguard these traditions.” NVG