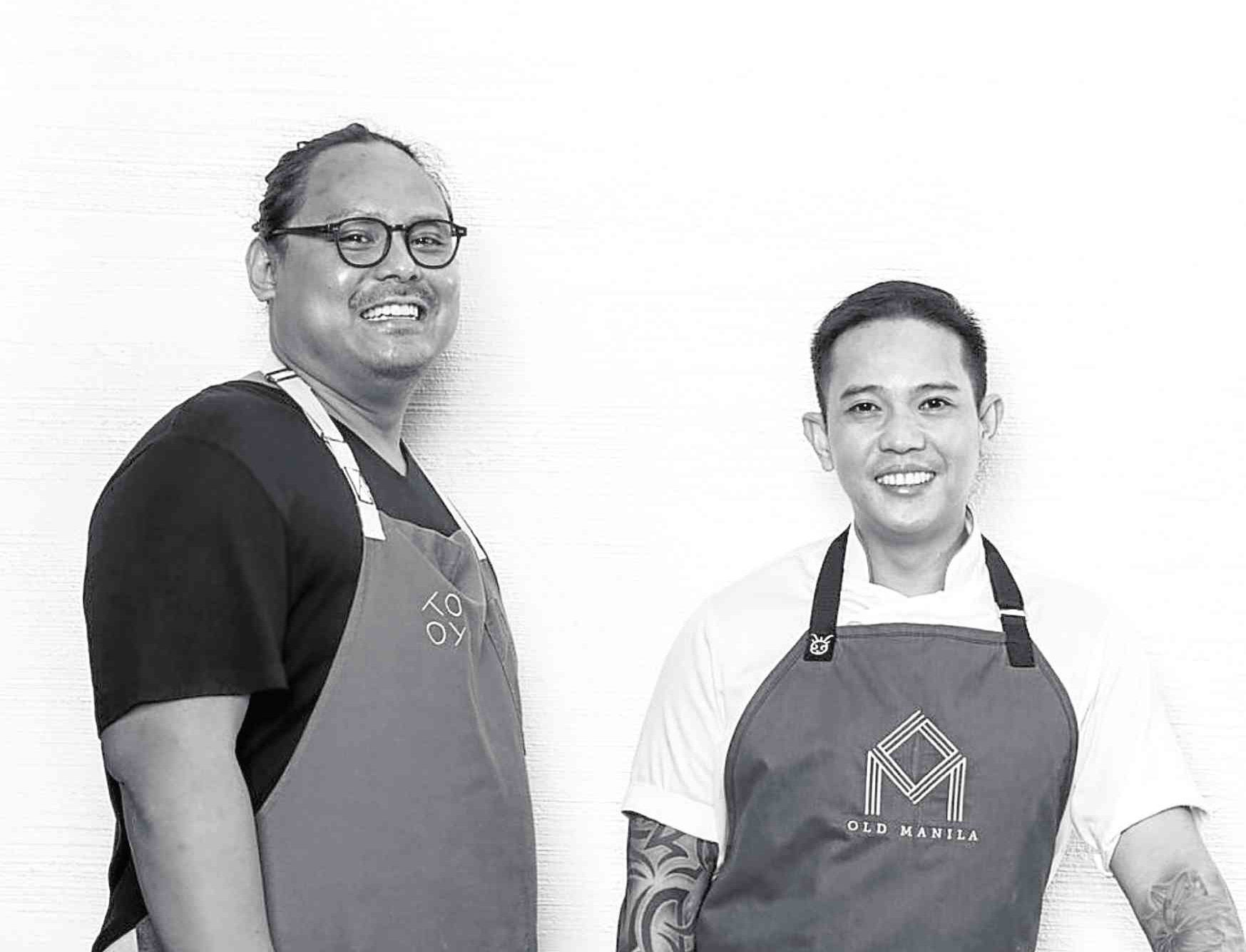 Chefs Jordy Navarra of Toyo Eatery and Allan Briones of OldManila, The Peninsula

Even just by the names and ingredients of the canapés, you can tell that two different chefs were working in the kitchen of The Peninsula Manila for this one-night event.

These events are called “four hands” and for this one night, those belonged to chefs Allan Briones and Jordy Navarra.

Toyo Eatery chef  Navarra had grilled pork on a bed of buro (fermented rice) on top of mustasa (mustard leaf). Then a mouthful of sweet potato nilupak (pounded), cassava and sea urchin.

This was the second collaboration for Briones and Navarra. The first was held at Navarra’s restaurant in July as part of the Salu-salo series involving different restaurants and chefs.

Both chefs trained abroad. Briones did his stint with the talented taskmaster Marco Pierre White in London and Dubai. Navarra trained at The Fat Duck in the United Kingdom and at Bo Innovation with Alvin Cheung in Hong Kong.

Today, Briones is the first Filipino main chef at Old Manila. Navarra recently was cited as Miele One to Watch Award 2018, a category in the Asia’s 50 Best Restaurants, an annual list that indicates the best places to eat in Asia.

For the one-dinner event, the chefs divided the courses between them.

For the first course, it was kinilaw of oyster by Navarra, just one fresh, fat oyster on its shell on a bed of salt. Placed in front of guests was tabon-tabon, a fruit used in Mindanao for kinilaw.

Since I had been schooled by kinilaw experts, it was my turn to pass on the knowledge. The tabon-tabon’s core is scraped then used to wash the fish or marine food to take out the fishy taste, as well as to aid in digesting the raw ingredient.

The rest of the ingredients were gamet, seaweed akin to Japanese nori and harvested in the Ilocos seaside. And then the souring agent used was kabayawa, the word for that sweet smelling dayap (lime) in Agusan. To go with it was a light Santa Margherita Pinot Grigio.

Briones had a crisp croquette with wagyu beef cheeks, placed on pureed preserved cabbage, the flavors enhanced with pickled radish and apple.

The beef cheeks got the table talking about cabeza de jabali, stuffed boar’s head which was still being done in the early 20th century by elite families. Briones’ dish must have reminded some people of this traditional and almost extinct food.

The dish was accompanied by a Clarendelle from Bordeaux which had three grape varieties—cabernet sauvignon, cabernet franc and merlot.

The third course was Navarra’s take on the Butuan buntaa which is crab meat cooked in coconut milk and meat of young coconut.

Butuan in Agusan is known for its mud crabs and buntaa is one way to cook them. The Navarras come from Butuan.

The chef decided to cover the cooked shelled crab with its roe, young coconut and ginger with a flan, though some of the crab meat was on top to one side, beautiful to look at and wonderful to eat. That was taken with a Riesling Qualitatswein from Mosel, Germany.

Briones’ last course thankfully proved to be light—smoked Iberian pork tenderloin flavored with picada, a sauce of Iberian origin made of bread, liquid and a nut, traditionally almonds, but the chef decided to use the very Filipino pili. The sides of king oyster mushroom, long beans, camote (sweet potato) and shallots kept to the light quality of the dish.

After three wines, the fourth one served with the course made everyone sit up and take notice because it was quite a discovery: Bread and Butter pinot noir from Napa Valley, its name in keeping with the simplicity of the wine and is now added to our must-have list.

As if we hadn’t had enough alcohol in us—which began with a cocktail called Kasabihan, a refreshing mix of local white grape liquor, dayap, pandan and my favorite fruit, chico, concocted by The Peninsula Manila beverage manager Federico Deang—the dessert of executive pastry chef Xavier Castelo had to be a gin and tonic composed of Hendrick’s Jelly, a sorbet and micro cucumber chutney.

It wasn’t sweet, more like a palate cleanser, and just what was needed.