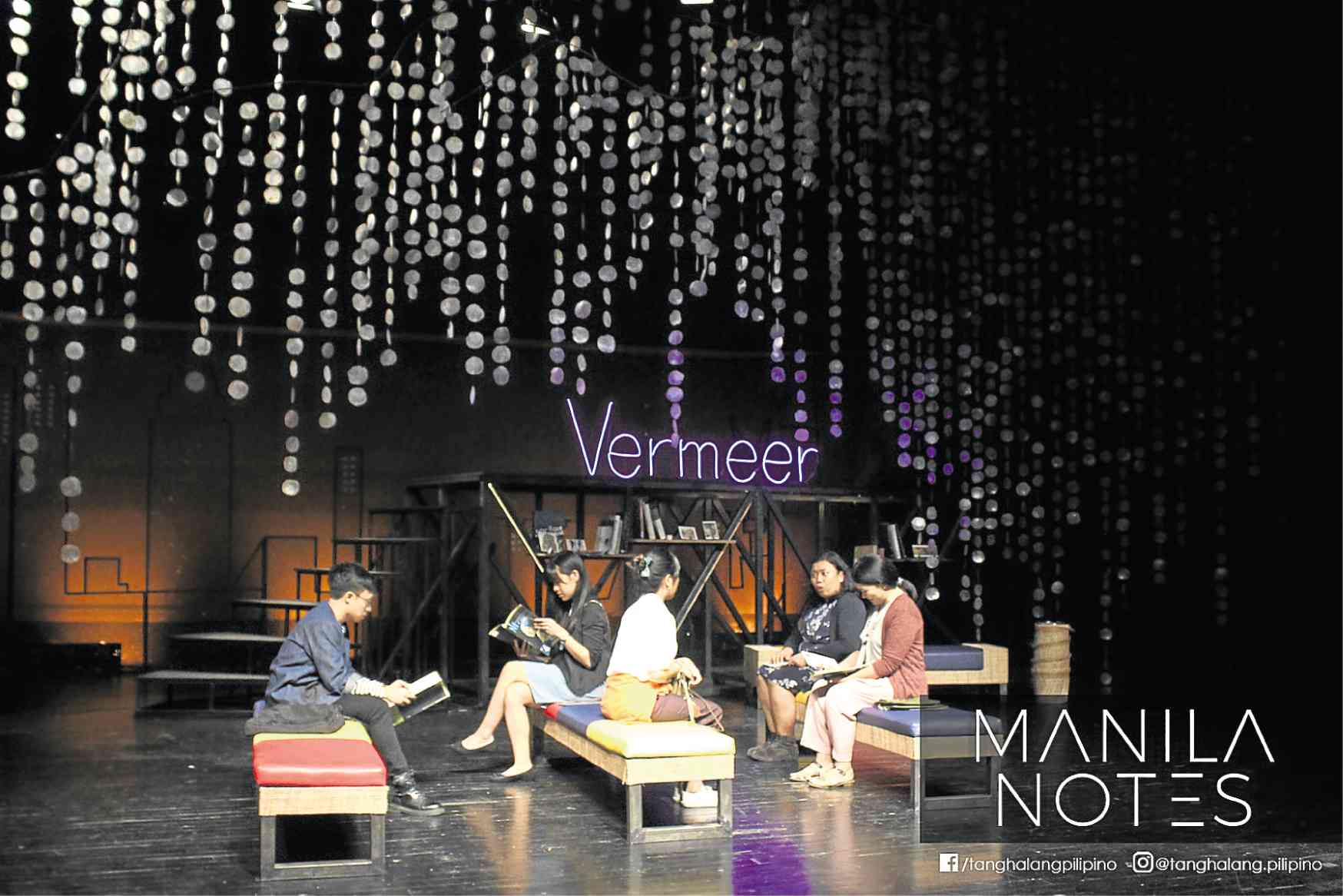 ‘Manila Notes’ scene: A war in Europe leads to the evacuation of Vermeer paintings to Manila.

Nothing of magnitude happens in Tanghalang Pilipino’s “Manila Notes.”

By magnitude, of course, we mean onstage fireworks, 11 o’clock numbers and gripping altercations, those so-called big theatrical moments that both stop the show and make the audience silently beg for more.

The closest “Manila Notes” has to such a moment is probably the brilliant comic actress Meann Espinosa ending a low-key argument with a two-word punch line: “Ang weird!”

Or, much later in the play, Espinosa briefly scuffling with a museum curator over a digital camera (whose existence, you suddenly remember, has been all but snuffed out by smartphones).

But Espinosa isn’t the main star here. There are no “stars” in this play. “Manila Notes” is an ensemble piece through and through, adapted by Rody Vera from Oriza Hirata’s “Tokyo Notes.”

The action seamlessly unfolds in real time in a corner of an unnamed Manila museum. It is 2034, and a war in Europe has consequently led to a global evacuation effort of cultural property, the scale of which recalls the peerless work of the Monuments Men during World War II. Imagine Manila as refuge for Vermeer paintings.

Inside the museum, all is spick and span. The viewer becomes acquainted with a multitude of characters, most of them visitors checking out the European acquisitions. And the longer they talk, the more it dawns on you just how refreshing the dialogue is: Hirata, by way of Vera, has captured the cadence of everyday life.

It’s liberating, to say the least, this opportunity to just listen and lose one’s self in the conversations of relatively nondescript people—a full 180 from the past month’s kinetic theatrical offerings, like Atlantis Theatrical’s first-rate “Waitress,” or the audience-pleasing “Mula sa Buwan,” or Tanghalang Ateneo’s “Marisol.”

Listen closely, though, and the great irony reveals itself: Impermanence is slathered all over this play whose one superficial point seems to be, “Take your time.” It’s not just the looming threat of war spilling across the continents; it’s the idea of finality hounding every scene.

The family of Espinosa’s character, having decided to meet up in the museum for dinner, must also deal with the inevitable, foreseeable future of their aging parents back home, wherever home is.

One of the sisters, played with affecting restraint by Mayen Estañero, is in a failing marriage. A pilot and his significant other embody the fragility of long-distance relationships, besides the fragility of human life itself.

On a larger, more metaphorical scale, there’s even the art as refugee, in a reversal of fortunes when viewed alongside the European migrant crisis that has upended so many lives. It’s mortality as a Damoclean sword, dangling over everybody’s head.

This grimness isn’t immediately accessible, however, which makes viewing this play even more of a challenge. Besides the meditative exchanges, what constitutes the bulk of the dialogue appears to be ekphrasis—and not just clear-cut commentary on the art on fictive display, but also the role of art itself in the larger scheme of things.

That’s not exactly everybody’s idea of a fun afternoon in the theater. But in a landscape of musicals and sentimental dramas, this play is a rarity. And if it languidly takes its time, it also generously rewards one’s patience.

The beauty—and pleasure—is in the details, in the dialogue that seems pulled right out of an unpretentious viewer’s tongue, in the pitch-perfect acting of the ensemble directed by Hirata himself. Nothing and everything, happening all at once—that’s not something one completely grasps with just a single viewing, which is to say, yes, this show is worth a second look.

“Manila Notes” is the final piece of theater to open in Manila this year. And what an absorbing, elegantly rendered finale it is. —CONTRIBUTED

“Manila Notes” runs at the Cultural Center of the Philippines Tanghalang Aurelio Tolentino until Dec. 16. Visit ticketworld.com.ph, or contact Ticketworld at 8919999, the CCP Box Office at 8323704 or Tanghalang Pilipino at 8321125 loc. 1620 for tickets.