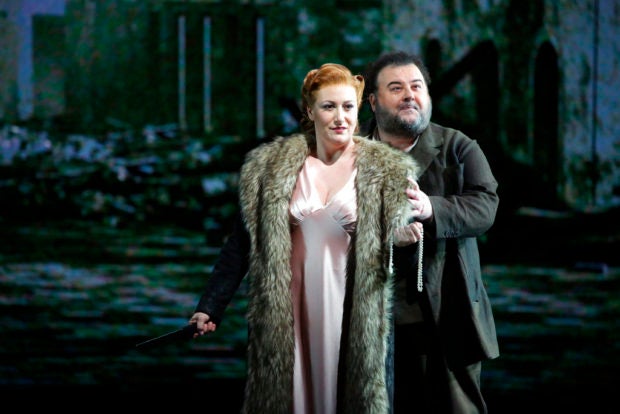 MILAN — La Scala’s season premiere Friday of a new production of Verdi’s “Attila” took on contemporary themes of male leaders selling out to self-interest while the final act of heroism falls to a woman — and won over an audience that included Italy’s president.

“Not even a rapper from the Bronx is as contemporary as Verdi,” said the production’s stage director, Davide Livermore.

The audience of gala premiere VIPs applauded for 13 minutes for the opera, conducted by musical director Riccardo Chailly, and welcomed President Sergio Mattarella at the start of the evening with a resounding five minutes of applause. Chailly waited patiently at the podium to begin the performance.

“Mattarella is serving an extraordinary mandate. It is very justified an applause of this length seeing the commitment and difficulty that he has had confronted and is confronting,” Chailly said. After the performance, Chailly said that the president told him that music and culture were “the bastions of democracy.”

While the Dec. 7 premiere is a highlight of the European cultural calendar, the audience was mostly filled with Milan VIPS. Several government ministers attended alongside Mattarella, but none of the country’s populist leaders.

The timing of the “Attila” premiere — against a backdrop of increasing populism, global insecurity and women’s rising power via the #MeToo movement and U.S. midterm elections — is coincidental.

“Attila” was chosen years ago by musical director Chailly to be the second in a trilogy dedicated to Verdi’s early works, starting with “Giovanna d’Arco,” which opened the 2015-16 season, and “Macbeth,” which has yet to be announced. Chailly conducts the opera, his fifth premiere in 40 years with La Scala.

In the prologue, Attila, sung by Russian bass Ildar Abdrazakov, accuses the Roman general Ezio, portrayed by Romanian baritone George Petean, of betraying his people when he offers to give invaders the rest of the empire in exchange for the Italian peninsula.

Abdrazakov enters on a horse, adding drama but raising protests by animal rights activists. A papal figure arrived on a white horse later, to confront Attila. Livermore said the animals in the production are professionally trained and that all proper procedures were followed.

The confrontation between Attila and Ezio has a political message that resonates today. “Attila teaches Ezio a moral lesson. He says: ‘You don’t sell out a country for your personal account,” Livermore said.

At that point, Livermore initially envisioned having a bridge in the background collapse as a symbol of ruin, but after the Genoa bridge collapse that killed 43 people earlier this year, he changed the staging. Now the bridge was pulled apart, leaving a gap. While Verdi’s drama was set in the 5th Century, Livermore’s chose a 21st Century staging, with uniforms and vehicles recalling World War II.

Spanish soprano Saioa Hernandez made her debut at La Scala and in the role of Odabella, who ultimately avenges the death of her father, the leader of Aquileia, by killing Attila. Italian tenor Fabio Sartori sang the role of Foresto, the knight who loves Odabella and fears she is betraying both him and her country.

Abdrazakov, who sang in his third La Scala season premiere, said it was always his dream to sing “Attila” at the famed Milanese opera house.

“In the early 1990s, when I had no interest in opera or classical music, I saw a video of ‘Attila’ at La Scala. I don’t know what happened, but the next day I went to my teacher and said I wanted to study opera,” he said. “Slowly, thanks to Attila and La Scala, I fell in love with opera.” MKH

Tenor Arthur Espiritu shuttles between Switzerland and Israel for performances