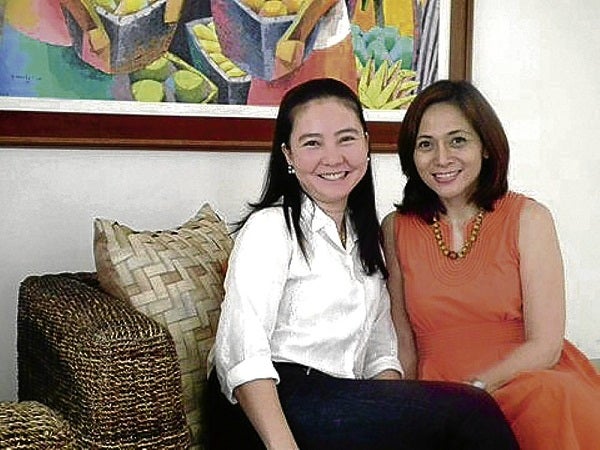 “When we graduated from college 25 years ago, simple lang naman ang pangarap natin di ba? Magtrabaho, mag-asawa, magkaroon ng pamilya…” Gina Luna-Bermudo told me over lunch in her home one bright Friday morning. At the table was another Ateneo batchmate, Mary Rose Ramoso-Pena, who echoed the thoughts.

The world Gina and Mary Rose found themselves in became much more complex than they ever dreamed possible. It was a world that required tremendous courage and tenacity, and amazing strength and faith.

Gina and Mary Rose have two children each who were born with autism. Gina has 16-year-old Niko and 11-year-old Sandy, who was also born with Marfan Syndrome. Sandy passed away last July.

Mary Rose has Kokoy and Jackie who were both diagnosed with autism at age two, born as a set of triplets with Lucy being the third. She has two other daughters.

After years of flying with Saudia, Gina opted to stay at home and focus on raising her two boys. I was deeply moved by her dedication, and by her mastery of the ins and outs of autism. She serves as a trustee of the Autism Society of the Philippines.

On my visit, she was busy preparing for the “Angels Walk for Autism” on Jan. 22, and  getting ready to sit in a panel for a forum on “Understanding Passengers with Autism” to be held at DOTC on Jan. 24. “It’s a busy time of the year,” she told me.

The Bermudo home has been designed in such a way that everything is simple and airy. “This is really the way we live,” Gina shared. Natural light filters in through big windows, and a Zen spirit is in every nook of their beautiful home.

In the therapy room, and in the boy’s room, I got a glimpse of this brave world that mothers like Gina and Mary Rose live every day—the task list was prominently posted on the wall.

Simple tasks we take for granted and order our children to do, such as taking a shower or brushing one’s teeth, need to be broken down into tasks that are further broken down into painstaking detail—“Get towel. Dry face. Dry neck. Dry left upper body. Dry right upper body. Dry chest. Dry tummy. Dry back.” The instructions must be followed down to the letter  daily, because nothing must break the  sequence lest you risk a tantrum.

Gina has managed to go through her days with equanimity. “It’s difficult and challenging, but it’s not a tragedy,” Gina said. “You do it all with love because it is your child.”

I listened intently as both mothers traded “war stories” about how their children bring special gifts and how they have learned to value the simplest joys of each day.

Mary Rose, who runs a successful bread business, shared how Kokoy struggles with language and is easily upset by sounds, but in the same breath relates how he is such an athlete. She also shared how Jackie, who is higher-functioning than Kokoy, takes care of her brother, and how Lucy, the third part of the triplets, is protective of them both.

“It’s the little things that many other parents with ‘normal’ children take for granted that bring us a lot of joy,” Mary Rose said.

It’s the early days, they both agree, that are the most challenging. “In an ideal world, a newly-diagnosed child would have an hour of Occupational Therapy a week, one hour of Speech Therapy, and 40 hours of Behavioral Therapy plus the other therapeutic modes (art, sports, etc.) that you would like to build in. It takes a great deal of patience but, really, there is no other way to go about it, and every member of the household has to understand the condition and be involved in their way,” Gina explained.

The adolescent years, Gina said, are the next big hurdle because it’s when raging hormones come into play. A child with special needs will need special handling and explanation about all the attendant feelings he or she is having, because it can be overwhelming at times and must be addressed as early as possible to avoid embarrassing scenes that may take place in public.

I asked them what they thought of “Budoy,” the teleserye that features actor Gerald Anderson as a person with special needs.

“He is supposed to have what is called Angelman’s Syndrome, a condition wherein the person exhibits autistic-like symptoms. Yes, it does exist, so in that sense, the show is good because it brings more awareness about children with special needs,” Gina said.

However, they found one episode troubling when Budoy hit his head and suddenly became like a normal-functioning person. “We had people calling the Autism Society of the Philippines office and asking, “Kung mabagok ba ang anak ko, babalik ba sya sa normal?”

Both moms agreed that the presentation of autism by media can be problematic.

“Parents need to remember that the mind of a child with autism is a blank slate; whatever you give is what they will take in,” Gina explained.

Early diagnosis is also critical. “It’s not a tragedy to have a child with autism or a child with special needs. What is tragic is when parents stay in denial and refuse to have their child diagnosed until it is late in the game,” she stressed. “The earlier one’s child is diagnosed, the better you can help him or her.”

Jan. 22-29 has been designated as National Autism Consciousness Week, and the ASP has a series of educational activities lined up for parents and the  public, among them special screenings at the Shangri-La Cinema of “Ocean Heaven,” a movie on autism starring Jet Li, who plays a single father of a son born with autism. Please call 9298447 or visit www.autismsocietyphilippines.org for more information.