The Lunch that Launched a Republic | Inquirer Lifestyle ❮ ❯ 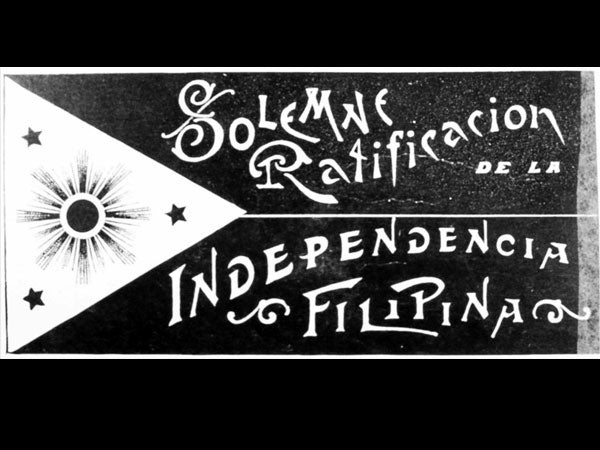 The cover of the menu of the Malolos Banquet

The Lunch that Launched a Republic

“Iconic” is the best word to describe the “Independence Balcony” of the Emilio Aguinaldo Shrine in Kawit, Cavite, where the declaration of Philippine independence from Spain on June 12, 1898 is re-enacted every year as part of the celebration of Independence Day.

Most people may not know that the Independence Balcony is an early 20th century addition to Aguinaldo’s home. In 1898, the declaration of independence was read from a window. Furthermore, the official commemoration begins with simultaneous flag-raising all over the country, taking the cue from the flag raised in Rizal Park by the country’s President. Independence was originally declared in the afternoon.

June 12 is a national holiday to remind Filipinos that it was one thing to declare independence, another to actually attain it.  It is one thing to gain independence, and quite another to know what to do with it.  From 1898 to the time that the United States finally recognized Philippine independence on July 4, 1946, to this day, history has been on the march and many of the details are lost in the retelling.

Take food, for instance. Food is essential to life but is often glossed over by historians. Filipinos then as now celebrate with a meal, so if the declaration of independence was held in the afternoon, can we presume that the party that followed was merienda? Merienda-cena? Or perhaps a full dinner? Puto and bibingka (rice cakes) must have been on the table, based on references in the account books of the revolutionary government that list expenses for a “bibingquera ng presidente” meaning Aguinaldo employed a personal bibingka maker. Then there are the disbursements for puto and cigarettes to keep the soldiers in fighting form. Accounting records boring in their monotonous detail can be used by the diligent historian to recreate the past.

We do not know what the Founding Fathers of the Philippines ate on June 12, 1898 but we do know what some of them ate for lunch and dinner on September 29, 1898 when the Kawit declaration of independence was ratified by Aguinaldo’s government in Malolos. We owe our knowledge of this historic meal to an American correspondent covering the Spanish-American War for Harper’s. He reproduced the invitation and the lunch menu in his dispatches. Filipino revolutionary newspapers had short commentary on the meal but left out many details.

Wonderfully designed by Arcadio Arellano, the menu is in the form of a Philippine flag with the words “Solemn ratification of Philippine independence.” When opened to reveal the menu, you see: the date of the party, Sept. 29, 1898, and the words “Libertad,” “Fraternidad,” and “Igualidad,” the rallying cry of the French Revolution of 1789. It comes as a surprise to many today that the lunch menu was not in Filipino but in French as follows:

For starters, the Founding Fathers were served: oysters, prawns, buttered radish, olives, Lyon sausages, sardines in tomato sauce, and salmon with Hollandaise sauce. The main courses consisted of: crabmeat in its shell, filled pastry shells, chicken giblets, mutton chops with potato straws, stuffed truffled turkey a la Manilloise (perhaps a pavo embuchado), beef fillet a la Chateaubriand with green beans, and cold ham with asparagus. For dessert there was an assortment of: cheeses, fruits, jam, frosted strawberries and ice cream. To wash down the seven appetizers, seven courses, and four desserts, one progressed from Bordeaux to Sauterne, sherry and champagne, then to the liqueurs Chartreuse and Cognac, and finally to coffee or tea.

Everything sounds much grander in French, making the late National Artist Nick Joaquin declare effusively, “The menu is a culmination, like Malolos itself, and should stand side by side with the Malolos Constitution.” Over the last decade, Filipino chefs have tried their hand at interpreting this menu, beginning with Gene Gonzalez in 1998, who cooked up the lunch that took all of three hours to consume from start to finish. Recently, Myrna Seguismundo did her version of the dinner menu.

In each re-creation and re-intepretation of the menu, new questions crop up. Surely the VIPs had the French menu, but did common folk have the same? Did the Founding Fathers have everything in the order listed in the menu or were the different courses passed around in bandejados or platters, each guest served a portion, or did they serve themselves? Perhaps the meal was set on a table, buffet style?

We know the seating arrangement and the number of silverware from contemporary newspaper accounts, but are left in the dark regarding the food. What kind of cheese was served? Was it the salty hard type known to us as queso de bola that could withstand the long sea voyage from Europe to the Philippines? All the wines, cheeses and other European staples were available from Manila specialty shops. Beef and lamb were imported from Australia. Were most of the ingredients fresh – as in, freshly scooped out of a can? How do you explain the ice cream? Ice was not readily available in Manila until the Americans established the Insular Ice Plant in the 1900s. Ice for this meal was imported from the United States, cut out in huge blocks from Wenham Lake near Boston and shipped all the way to India, with Manila as a stop-over for refueling. Was this how ice was supplied or did they make ice using chemicals?

We have studied the lunch menu above – the next step is to dissect the dinner menu and seek out the breakfast and merienda menus if they exist. Our long march to nationhood was difficult, but our Founding Fathers occasionally tried to make the trek lighter by doing things in style.