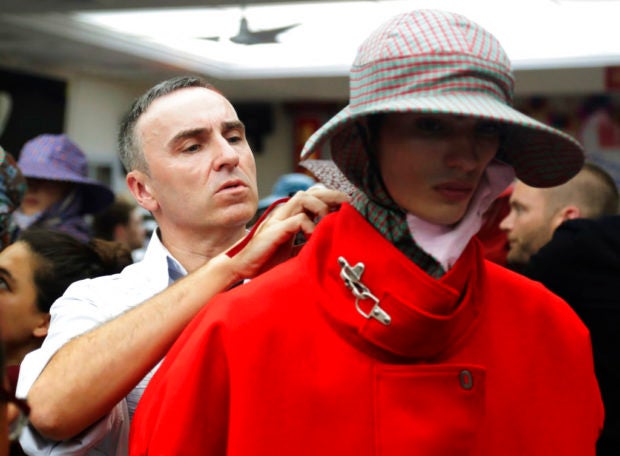 Raf Simons out at Calvin Klein after 2 high-profile years

NEW YORK — Less than two years after he shook up the New York fashion world with a splashy runway debut for Calvin Klein, designer Raf Simons is leaving the company.

The company and the Belgian designer announced they were “amicable parting ways” after Calvin Klein “decided on a new brand direction different from Simons’ creative vision.” A representative for Simons said in an email Friday night that the designer would have no further comment.

Simons revitalized Calvin Klein with his hip European sensibility after being appointed chief creative officer in 2016. His New York Fashion Week shows were the talk of the industry, beginning with his February 2017 debut, which had a clear political message, opening and closing with the David Bowie song “This is Not America.”

Celebrities flocked to his shows, critics raved, and the fashion establishment rewarded him with three top awards in two years. He won the Council of Fashion Designers of America award for womenswear in both 2017 and 2018, and in a rare feat also took the menswear award in 2017.

But critical raves don’t necessarily translate to commercial success. There was reportedly disappointment on the part of PVH, the corporation that owns Calvin Klein, in sales under Simons.

Simons, 50, who previously worked at Dior and Jil Sander, brought an artsy European approach to the iconic American brand, often citing numerous cultural references — but especially Hollywood — as inspiration. In September, his runway show riffed on the movie “Jaws,” with models in various types of wetsuits strolling in front of enormous screens depicting a glistening ocean.

Many of the garments had big bites taken out of them — as in shark bites. Simons said the shark represented danger.
“Very often we are attracted to things that we actually know are dangerous,” he said in an interview. “But we can’t stay away from it.”

Some models wore tasseled caps and robes; Simons was also riffing on “The Graduate.”

At his show last February, Simons coated the former American Stock Exchange Building in downtown Manhattan with a huge bed of popcorn. Guests slogged through the kernels to get to their seats, with bits of popcorn falling into boots and shoes and coating one’s clothes with powder.

It was Simons’ version of an American landscape, including a huge barn house. But the clothes evoked not so much rural America as a dystopian world on another planet, with balaclavas, huge gloves, and bits of Mylar flowing from the garments.

As was typical, that show was attended by a slew of celebrities including Nicole Kidman, Margot Robbie, Laura Dern, and — straight from a premiere party — the cast of “Black Panther,” including Michael B. Jordan, Lupita Nyong’o and Chadwick Boseman.

Calvin Klein will not show during New York Fashion Week in February 2019. No word was given about a successor.
Simons also has his own, eponymous menswear label. MKH

Moncler, Coach and Calvin Klein: The brands that went co-ed in 2017

Calvin Klein’s Raf Simons takes a bite out of fashion, riffing on ‘Jaws’