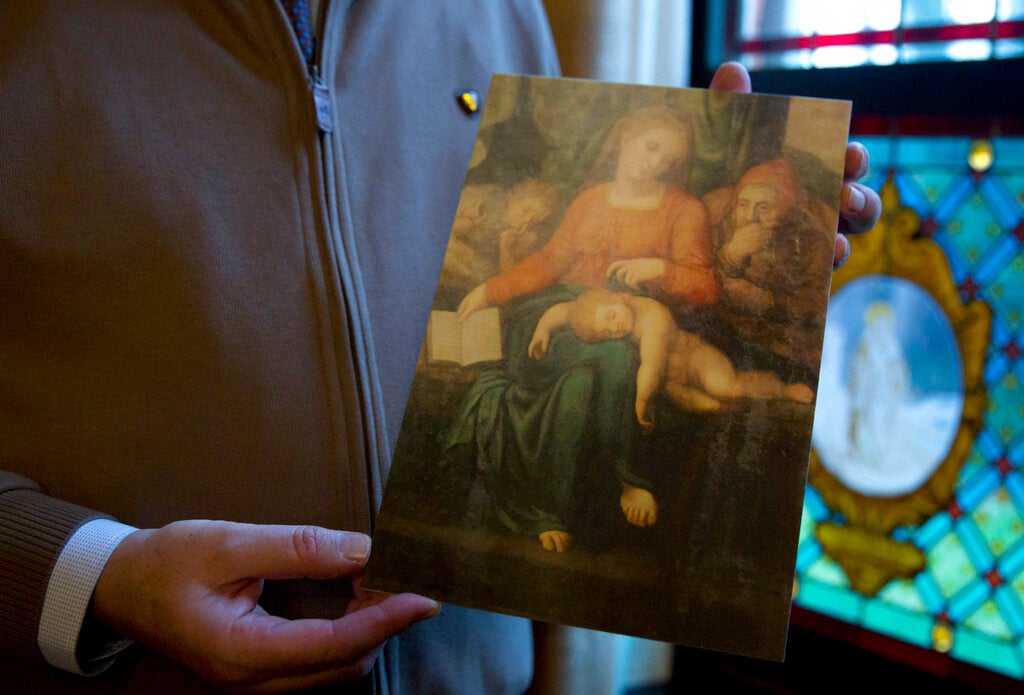 BRUSSELS (AP) — It’s probably not a long-lost painting by Michelangelo. It almost certainly wasn’t stolen by a sophisticated gang of international art thieves. But the disappearance of a painting that a priest claimed resembled a work by the Renaissance master has Belgian investigators scratching their heads.

The wood-mounted art piece — “The Silence of Our Lady” — was snatched last Friday from the Saint Ludger Church in the town of Zele, 50 kilometers (30 miles) northwest of Brussels. The priest, Jan Van Raemdonck, believes it could be a Michelangelo and says an Italian art expert was due any day to come and authenticate it.

Police have obtained grainy security video of a man walking near the scene before dawn with what appears to be painting propped up against his head. A feat in itself, as the priest says it took three men to place the approximately 5 foot-by-3 foot work on an easel just before Christmas.

“He was not very smart,” the priest, who was writing a book about the painting, told The Associated Press. “It was at 5:15 in the morning. Other people passed by him in their cars going to the train station, so I hope other people have seen where he has put that painting in his car, which car it is, and maybe that we can follow him.”

Besides the video, police also want to talk to a man between 17 and 20 who a witness saw near the church that morning, wearing a grey hoodie and carrying a dark backpack.

While finding out where the painting has gone is a challenge, establishing where it came from is almost a mystery in itself. A Belgian lawmaker is thought to have bought it from a friend who was having financial difficulties. The lawmaker then sold it to an organization that helps the church.

Thirteen years ago, the organization gave it to the church in Zele. It languished in a corner where it couldn’t be seen for 11 years until Van Raemdonck moved it to a more prominent place. Just before Christmas, he proudly put it on display in the middle of the church.

Van Raemdonck says he told very few people about his suspicions that the painting might be a Michelangelo, but despite his enthusiasm for the painting, art experts say it’s extremely unlikely the piece is a 16th-century masterpiece.

“This painting is a relatively close copy of Michelangelo’s prototype,” Didier Martens, an art history professor at the Free University of Brussels, told the AP on Wednesday. “Stylistically there’s a clear link with Michelangelo.”

Martens said he believes that the painter “only knew Michelangelo’s model through an engraving” but said the artist has “succeeded in keeping enough Michelangelo elements in his work.”

Whatever the painting’s origins and the outcome of the investigation, Van Raemdonck has a wealth of new material for his book. KM