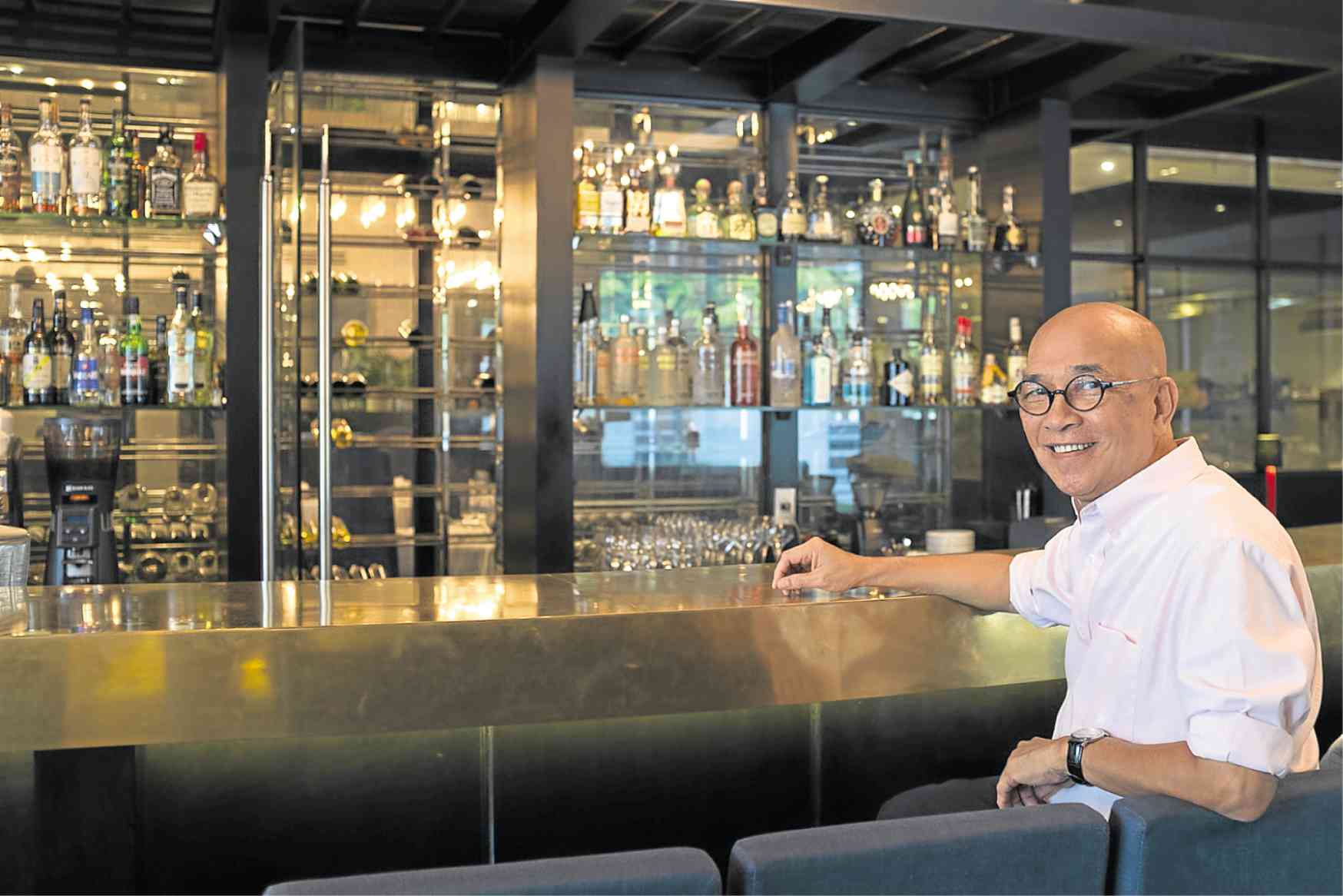 Cesar Gaupo at bar of restaurant he designed

Cesar Gaupo promised to attend the Lifestyle meeting of fashion designers last Monday to discuss our bridal show with Seda Vertis North. Instead, we attended his interment last Friday.

He was found lifeless in his condominium unit, where he lived alone, on the morning of Jan. 19. He died in his sleep. Apparently his heart gave way. It was not too old a heart—he was not that old biologically, and outlook-wise, he was certainly as hip and vibrant as today’s generation.

His friends and colleagues, in a puny attempt to console themselves, say that was the best way to go—no pain or prolonged suffering, no debilitating years of old age. But still, they say, Gaupo didn’t prepare us for his departure.

Or perhaps, he did. When I messaged him a few weeks ago if he’d like to join our bridal show (Entwine-Face-Off Bridal Edition) on Feb. 17, even if he was so busy, he replied: “Of course, love kita, eh!!”

Even if Gaupo was the funniest, most expressive friend one could have, still I was surprised how he casually declared his affection in that message.

And it turned out, that wasn’t unique to me—he was telling friends who went to his birthday dinner, the night before he died, that he loved them, as he saw them off at the end of the party.

It was a rather big dinner to which he invited about 80 friends from fashion and retail—those he developed close ties to in the four decades or so that he devoted to Philippine fashion design. The guests were led by retail pioneer and SM head Tessie Sy-Coson, who came with her sister, Elizabeth, now active in SM Hotels.

That night, Gaupo dined, sang and danced with his friends whom he asked to come in “black chinoiserie” to complement the all-black table arrangements.

Apparently Gaupo said goodbye in his own fun—and chic—way. He had always told me that he’d gone beyond fashion design, into designing lifestyle. That Friday dinner, Jan. 18, Gaupo executed his ultimate lifestyle design. That was his goodbye.

Gaupo was in the thick of the action in a scene defined by daily luncheon fashion shows in hotels, regular dressed-to-the-hilt gala shows. The designers had to sharpen their scissors, quite literally, on a daily basis to prevail over the competition, because a fashion show was happening on a weekly basis.

Gaupo emerged in an era when the Filipino fashion designer was challenged to be at his most creative, most resourceful, and most innovative because the competition was fierce and relentless. Almost every day saw a battle for press coverage, and designers were kept on their toes by fashion reviews—some of which I enjoyed doing, by the way, and which forced me to read up on fashion history and on fashion collections abroad so that, at least, I knew what I was talking about.

Unlike today, you couldn’t wing it then because you’d be found out—by a nosy reader, designer or observer, or a senior editor in a newsroom that still observed hierarchy and the aristocracy of knowledge.

That was the era when there was a sizeable clientele of socialites who could keep the designers’ ateliers going almost every week, primarily because there were many social events one had to dress up for (not mere product launches), and women stepped out to outshine each other.

Drop-dead glamour—not dressing down—was the mantra. Elegance was the yardstick. Style was born out of one’s low-key—yet highly defined—individuality, not quirkiness, or one’s ability to shock. Women didn’t need to shock with their abs and butts in those pre-Instagram days.

That competitive setting and a thriving made-to-order market bred the “golden era” designers, and Cesar Gaupo was at the forefront.

But unlike his peers, Gaupo slugged it out on two fronts, all the way: custom-made or made-to-order, and ready-to-wear. His name became a brand even to the mass market, thanks to the Cesar Gaupo line at SM.

It was Sy-Coson, SM department store head, who spotted the potential of Gaupo and nurtured his career. The fashion visionary that she is, Sy-Coson shepherded Philippine RTW fashion as her dad, SM founder and great Filipino titan, Henry Sy, doggedly focused on shoe merchandising, and not even once did he let the shoe drop, in a manner of speaking.

Gaupo and Sy-Coson developed an unbreakable, strong bond up to the designer’s death. It was said that it was only Gaupo who’d dare give Sy-Coson unsolicited dressing tips now and then.

And it was uncanny that the elder Sy and Gaupo passed on at the same time.

For four decades or so, Gaupo was a pillar of Philippine ready-to-wear and made-to-order fashion, who had a loyal clientele of his elegant evening wear up to his last days. That was why he was willing to join our Face-Off Bridal Edition—because even young brides continued to go to him for their wedding ensembles.

He was putting the finishing touches on a bridal gown at the time of his death.

Such an exceptional career becomes all the more special when one realizes how this slightly built guy didn’t head to college from high school, but to Slim’s Fashion School instead, and did apprentice work for various ateliers starting in his late teens.

Indeed, Gaupo never ceased to work at his craft his entire life.

And even as he was on top of his game, he took the offer to head the design team of Shanghai Tang in Hong Kong, becoming one of only four Filipino designers to head an international fashion house (the others being Josie Natori of the global brand Natori, Roy Gonzales for the House of Jean Patou, and Monique Lhuillier).

Year in and year out, he designed the all-season collections (including accessories) of Shanghai Tang, a grueling physical and mental task that could have drained any artist. But nonetheless, Gaupo completed a successful run at Shanghai Tang.

What was the Cesar Gaupo imprint on fashion design? What was his design identity?

It bore his personal character—vibrant, humorous, whimsical, bold and definitive. His design signature was like his personality: authentic, honest—what you see is what you get.

Through the decades, his designs drew praise for their bold, stark lines and silhouettes— created by adept, tricky draping, or a subtle bias cut, for instance—and eye-popping jewel colors. Shocking fuchsias, deep emeralds, brilliant rubies— name it, Gaupo had no fear because he could tame their brilliance to suit a woman.

And he was just as fearless in combining them—for instance, aqua marine with tangy orange.

He belonged to the generation of designers that could cut, sew, drape, construct dresses and suits, and make them fit perfectly a woman’s body. Unlike today, his generation didn’t resort to the “magic” (my quotes) stretch tulle, which spares the designer from having to make the perfect fit because the tulle expands or contracts according to one’s body.

Given his mastery of construction, Gaupo became noted for both structured and fluid silhouettes, both tailored and feminine looks, both sedate and seductive. Yet, as he ran the design spectrum, his touch was always clean and well defined.

I remember his very snug body huggers where the fabric became virtually your second skin, defining your every curve (that, he refused to do for me), or his figure-friendly, cover-the-body-flaw draping (that, he willingly did for me). Gaupo dressed both the seductive woman and the practical, regular woman.

This was Gaupo’s imprint on Philippine fashion design— bold and fearless innovation, yet classic and timeless.

But while I can go on and on about the Cesar Gaupo design, what I really treasure were the private moments I was privileged to have shared with the person, and when I clearly got to know him.

Gaupo was laughter and humor. Perhaps this was why his clothes always had a touch of whimsy. There was not a moment we didn’t laugh, simply because he saw irony and comedy in the littlest details of life.

Apart from the happy times, we bore some tragedies and losses together—the deaths of our dear designer friends Caloy Badidoy (another RTW pioneer whose death anniversary is coming next month, ironically, near Gaupo’s death) and Ernest Santiago who, like Gaupo, took to designing homes after shaking up the fashion scene.

During one landmark fashion shoot after the series of coups d’etat in the late ’90s, which we did at Camp Crame (or was it Camp Aguinaldo?), in a setting of tanks and military armory, Badidoy was strutting around, showing his model how to do his clothes, when Gaupo sniped at the muscular Badidoy: “Caloy, mukha kang provincial commander na naka-duster.”

That was just one in a series of laughs that took us through a tiring day in those trying years.

Gaupo was simply my go-to friend for funny one-liners. That I will surely miss.

It must somehow help that in our last message-exchange more than a week ago, about our forthcoming bridal show, Gaupo texted one of his trademark put-down remarks about me and the designers.

For now, that will remain Gaupo’s and my funny secret.

Your eyes narrowed into slits when you laughed, Cesar. That shall be my indelible image of you.

Give Caloy and Ernest a big hug for us.