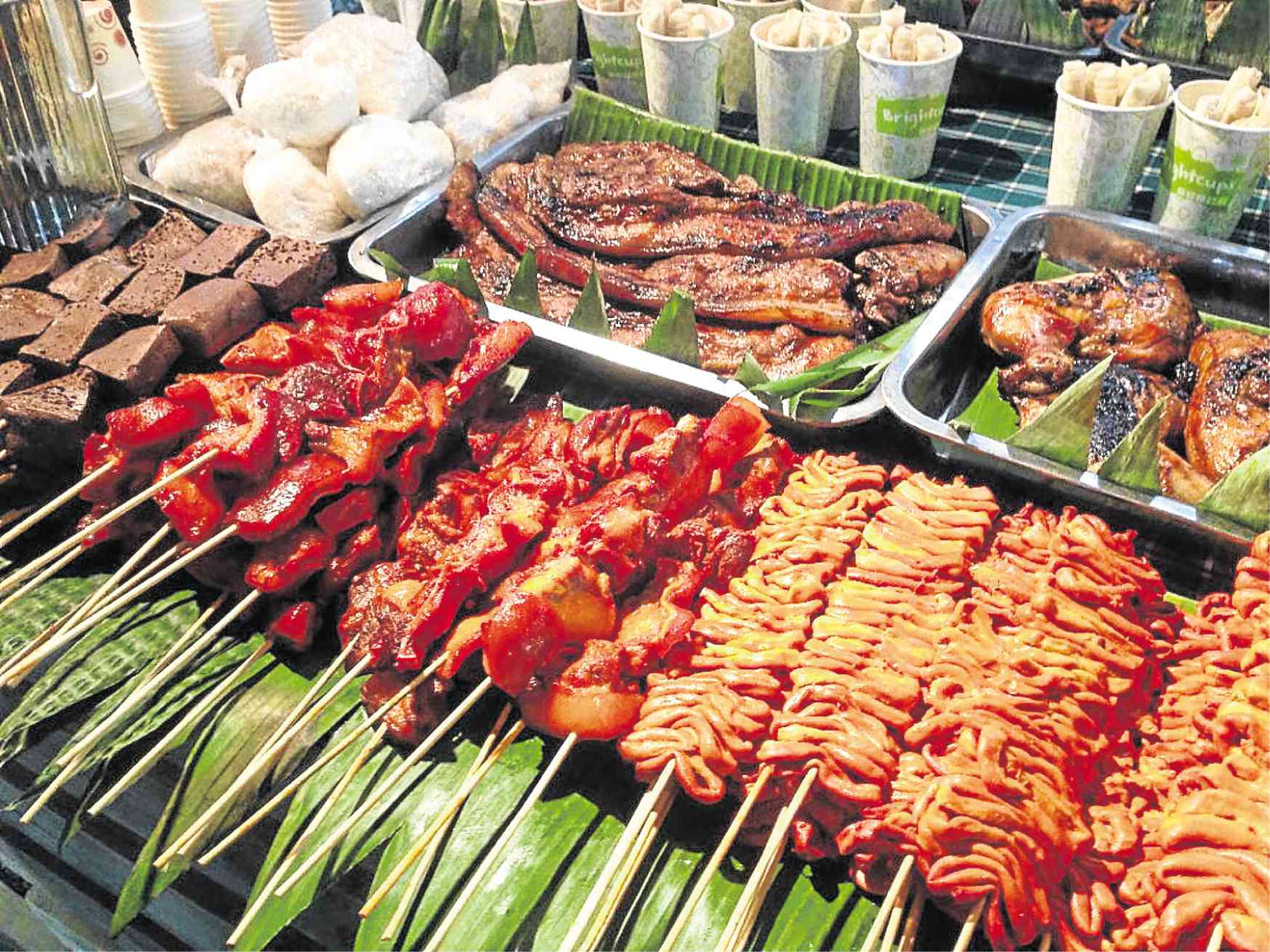 Skewered offerings at a barbecue stand

Can we still ‘make tusok-tusok’?

Over the past years, street food has attracted attention worldwide through blogs, even meriting a conference in Singapore and the Philippines.

But in Metro Manila, you wonder where the ambulant vendors with their goods are today. With the clearing of sidewalks and the gating of residential villages, food vendors can’t bring their wares anywhere.

The food once available only in streetcarts has moved on to permanent stalls in MRT, LRT stations, provincial bus and other transport stations.

The biggest upheaval is how street food has been “upgraded” in the malls. Though some are still in carts, these carts are in the malls, in alleys and passageways that pass for sidewalks.

The street food vendors are still ready to run away at the slightest sign  of a clean-up crew. Thankfully the boiled peanut vendors with their carts no longer are distractions on Edsa. I welcome the rare call of the balut vendor on our street in our gated subdivision at night. The buko vendor even rings our bell to ask if we want his fresh juice with thin slices of meat extracted right before our eyes.

My earliest memory of street food was the smell of gaas (kerosene) cookers on carts on Roxas Boulevard that sold kropek and popcorn in waxed paper bags. That was when the only people’s park was Luneta.

Breakfast could be pan de sal delivered by the bakery bicycle that would toot its horn (which is why people tended to call the vehicle “pot pot”). Or it could be puto and cuchinta from the man balancing two tin containers, both of which had a cone-shaped cover. Or maybe the taho vendor who also balanced tin containers though shaped differently, long and cylindrical, one containing the tofu, the other the syrup and sago, all of which end up in your glass or mug since there were no plastic containers then.

Thankfully, she described the two unfamiliar names to me—pasingaw, which is “steamed rice cake resembling bibingka”; and the putong bula, which is “large, white puto sliced on the bias.”

Doreen Gamboa Fernandez in “Tikim” (Anvil Publishing, 1994) had one chapter on “Balut to Barbecue: Philippine Streetfood” that she qualified as “not only a convenience” but “is a lifestyle.”

But that “lifestyle” may no longer be so given the conditions stated above.

“It is a thing of the past… I can understand the motivation behind it, what with the upkeep of hygiene standards, but I also feel that we have lost something beautiful. You can still get good local street food in parts of Singapore, but in markets and food courts that, really, just seems so artificial and sterile. It’s sad, really.”

Our street food and the hawkers’ cries may exist only in a museum some day, just as it does in Macau. One exhibit there shows a street scene in the old days and you press a button to hear the call of hawkers or the horn of peddlers on bicycles.

Pretty soon, street food will also just be part of our food history, read about but not experienced. Even the names will be a thing of the past.

A good example of that is the “dirty ice cream,” what the nuns in Catholic schools called unbranded noncommercial ice cream to dissuade their colegiala ward from buying. Do Caviteños still have the pansit istasyon, not noodles as the name suggests but sauteed monggo sprouts sold in the bus station?

We will also lose the most imaginative, funny street food names of barbecued meat parts—“Adidas” for chicken feet, “PAL” for chicken wings, “IUD” for the intestines, “Walkman” for pork ears and “Betamax” for congealed pork blood. They will go to where early techie equipment ends up— “into the dustbin of history” (attributed to Leon Trotsky).