Musuem of broken hearts has antidote to the lovesick | Inquirer Lifestyle ❮ ❯ 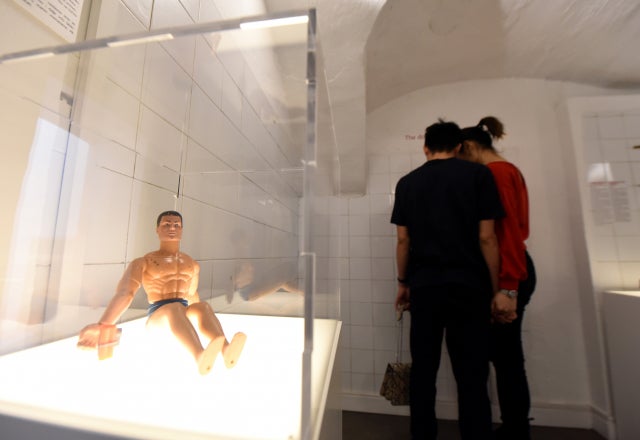 Visitors look at exhibits at the Museum of Broken Relationships in the Croatian capital Zagreb. Image: AFP/Denis Lovrovic

Lovesick on Valentine’s? Museum of broken hearts has the antidote

Forget romantic dinners and roses, the place to be on Valentine’s Day is Zagreb’s Museum of Broken Relationships, a paean to personal objects and stories of heartbreak.

From a toaster to an exercise bike and a pair of lacy bras, the small museum imbues seemingly ordinary objects with meaning through captions that detail their role in the unravelling of relationships around the world.

The stories swerve from humorous to heart-wrenching.

The museum was buzzing Thursday, Valentine’s Day, with groups of friends and also some couples seeking out an unorthodox way to celebrate love.

One of the lighter rooms, called “Take the bitter with the sweet,” showcases objects like a box of pizza-making ingredients — a love letter to one woman’s break-up with gluten — and a diet book with the caption: “This was a present from my ex-fiance… Need I really continue?”

But the mood is heavier in “Love in the trenches,” an exhibit with items like a wedding dress from Turkey that was never worn because of the groom’s unexpected death.

Nearby is a prosthetic leg from a veteran from Croatia’s 1990s war.

“The prosthesis endured longer than our love,” the caption reads.

The unusual idea was born from heartbreak itself.

After a break-up, the museum’s two Croatian founders, artists Olinka Vistica and Drazen Grubisic, both turning 50 this year, didn’t know what to do with their shared belongings and wanted to create an option other than the garbage bin.

More than a decade later, they have taken the museum on tours to 50 cities around the globe, collecting new objects and stories along the way.

“When we started with the project I had no idea what (kind of donations) we were going to get… but it turns out that people are so interesting, everybody has a story to tell,” co-founder Grubisic told AFP, adding that they receive around 200 objects by mail per year.

Jon Turner, a 33-year-old British tourist traveling solo in Zagreb, agreed the authentic portrayal of love was a fitting occasion for any visitor on February 14.

The theme of the museum’s next overseas stop, the city of York, will revolve around a different kind of break-up: Brexit.

Organisers have put out a local call for donations that will put a personal spin on the political drama.

“Recently ended a relationship? Wish to unburden the emotional load by erasing everything that reminds you of that painful experience?” the call of submissions asks.